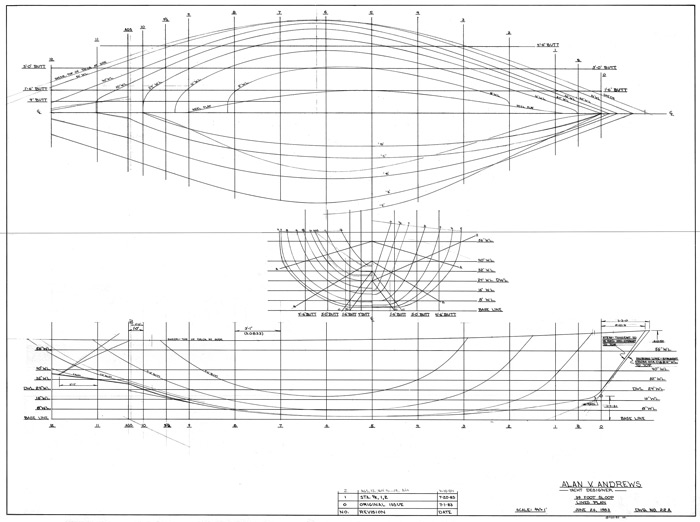 The International Offshore Rule (IOR) was the dominating race handicap system during much of the 1980s. Allegiance, built by Dencho Marine of carbon and epoxy, was first in class and second overall in the 1984 Southern Ocean Racing Conference (SORC).

It is the narrowest of niches, designing sail racing yachts according to the various handicap systems promulgated by governing organizations such as the Offshore Racing Council (ORC). You probably can count on one hand the number of designers who actually support themselves by trying to beat the rules as it were, and one of them is Southern California designer Alan Andrews, 58, profiled in “By the Rules,” Professional BoatBuilder No. 154.

Since graduating from Stanford University with a degree in mechanical engineering, and a passion for racing sailboats, Andrews has kept the light on in his studio by giving clients very fast boats. “Guys want to win,” he says, “and I can help them.” From the 30′ (9.1m) Details, which won the 1981 Midget Ocean Racing Club (MORC) championship to the canting-keel maxi Magnitude 80 (24.4m) that set numerous first-to-finish records in offshore races, Andrews’s portfolio is packed with winners. An essential element is knowing the rating rules inside out and then exploiting every possible point to gain some slight advantage that translates to victory at sea.

The following summary of major rating rules in use over the past three decades may give you a better understanding of, and appreciation for, Andrews’s uncommon talent.

In the late 1970s and early ’80s, the International Offshore Rule was the dominant rating system for handicapped yacht races; unlike the CCA (Cruising Club of America) rule that actually weighed boats to determine displacement, the IOR estimated displacement based on measurements. To enter a race, a boat had to be measured in a variety of ways, such as girth measurements and the spacing between them, as well as width and depth point measurements plus rig, sails, and flotation. Designers tried to achieve the most favorable rating by distorting areas of the hull, resulting in perceptible “bumps” to increase rated displacement or beam, and “hollows” at key locations to reduce rated sailing length. Complex formulas resulted in a single number rating in feet, and similar sailing length, for a given yacht. Narrow bows and sterns effectively moved the distance between girth measurements closer together; the overall result was relatively short, beamy boats (sometimes with tumblehome at B max and a narrower waterline) with pinched ends. 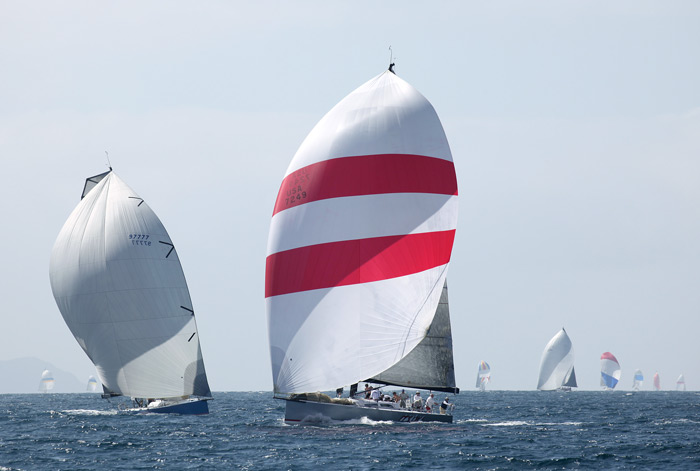 The Andrews 63 (19.2m) Medicine Man, owned by Bob Lane, won the Unlimited Division for boats with moveable ballast in the 2009 Transpac. That same year, the Andrews 50 (15.2m) It’s OK! also excelled on the race course, finishing first in class in the Newport to Ensenada Race.

The Midget Ocean Racing Club was a club fostering offshore competition between small boats, first under 24′ (7.3m) and expanded to under 30′ (9.1m) by the 1980s. Its rating rule, initially promulgated by the designer Bill Shaw, emerged from the CCA (Cruising Club of America) rule of the 1950s–60s and used a similar concept of corrections from a Base Boat. MORC measured sails, rig dimensions, beam, draft, waterline length, and both the length and transom width at 4% of LWL (length waterline) above WL (waterline) plus weighed the ballast and total boat. Ratings were expressed in feet. MORC favored relatively heavy boats with generous sail plans.

The International Measurement System is a velocity prediction program (VPP) that uses measurements of the entire hull shape as taken electronically by a wand or scanning device combined with flotation, rig, and sail measurements, and fed into a computer, where integrated quantities of displacement, wetted surface, sailing length, etc., are generated as input to the VPP. The program predicts the boat’s speed at a variety of wind speeds and angles from 6 to 24 knots, beating to running. Several ratings were generated for light, medium, and heavy air as well as offshore-style courses, allowing race organizers appropriate choices. Under IMS, overhanging bows began to disappear, and stern sections grew wider. In the late 1990s IMS gave too much credit to some speed-producing and drag items resulting in boats with wood keel tips, lead in the bilge, and distorted hull shapes. This lead to ORCi, a current European-based VPP handicapping system employing similar measurements but improved formula. Both IMS and ORCi programs were available to designers for running trial certificates in their offices.

IRC began as the Channel Handicap System in the U.K. and France when IMS wasn’t working with their fleets. Measurements are with a scale, tape measure, and plumb bobs, similar to MORC, plus arbitrary factors describing keel type, interior fitout, construction materials, etc. The rating is calculated in a nonpublic formula that develops a single Time Correction Coefficient (TCC) for all races so that each boat’s corrected time is elapsed time multiplied by TCC. IRC is seen as type forming with the favored type changing over the size range from the current Maxi-72s, through TP52-style boats to heavier production racer/cruisers with interiors less than about 36′ (11m). 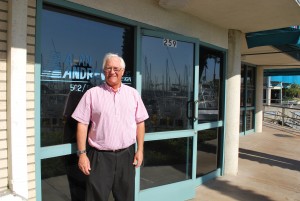 Alan Andrews stands in the California sunshine outside his office on the water in Long Beach. Armed with a degree in mechanical engineering and a love of sailing, he has built a successful career designing boats that consistently win in the handicap racing circuit.

The Offshore Racing Rule is a U.S.-based VPP handicapping system begun when IMS was generating slow boats. The Bermuda Race, Chicago–Mackinac, and Transpac all needed to handicap diverse fleets ranging from 70-year-old classic “woodies” to ULDB 70s and TP52s. ORR uses very similar measurements to IMS and ORCi but calculates speed predictions by a different, nonpublic VPP in an attempt to keep designers from exploiting loopholes. ORR is also used by Acapulco Yacht Club, the St. Francis Yacht Club Big Boat Series, Pacific Cup, and others. Ratings are customized for expected conditions and expressed either in seconds/mile or TCF for time-on-time scoring.

The High Performance Rule was developed as a measurement rule focused on modern planing keelboats. Measurements are by scale, tape measure, and plumb bob. HPR uses a Base Boat concept documented in a publically available spreadsheet encouraging designers to develop the fastest boat rather than lowest rated.

Performance Handicap Racing Fleet is a handicapping system that assigns to each yacht a handicap, in seconds per mile, based on observed performance rather than measurements. PHRF is locally operated so the same design might have different handicaps in light-air or heavy-air regions. Most PHRF authorities record rig, sail, and basic hull data, but few require independent measurement.