Several years in conception and construction, the in-house-designed Slane 62 (19m) is nearing completion. In the video above, posted in February, the company shows how it rolls the deck parts over after they have been pulled from the mold.

One of the best stories in early fiberglass boatbuilding is how in 1959 Willis Slane, who owned a company making argyle socks, was having drinks with some fishing buddies at the Hatteras Marlin Club in North Carolina. The weather was stormy and none of the skippers wanted to go out, fearing for their wood boats. As boating writer Pete Smyth told it, “Sometime during what was probably a very liquid afternoon, Slane pounded on the table and said, ‘I’m damned tired of these chickenshit captains who won’t go out, telling me that their boats won’t make it.’ Slane threw a check for $5,000 on the table and said, ‘Let’s build some boats that will go out!’” One of his friends, Sleepy Carter, who owned a textile company that was beginning to weave fiberglass, suggested the material be used as the reinforcements for what would become the Hatteras 41 (12.5m) sportfisherman. Jack Hargrave was commissioned to do the design, and Don Mucklow and Howard Abbey (see “Abbey and Brownie,” Professional BoatBuilder No. 104) were brought up from Florida to loft and supervise construction. Hatteras Yachts of New Bern, North Carolina, continues as one of the most iconic of American yacht brands. Slane died in 1965 at age 44. The company was owned at various times by AMF and Genmar. 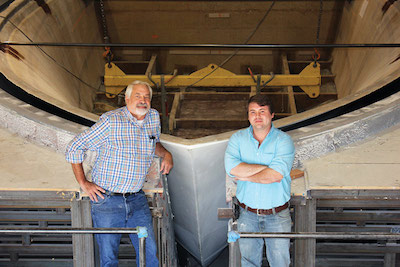 Son Tom Slane, with a degree in business administration, decided in 1984 to open a business refurbishing old and damaged Hatteras yachts. In “The Risky Business of Major Repairs,” (PBB No. 57), writer Bob Duke told how Slane saved and made his company profitable by diligently applying spreadsheets and other management tools to track every job in the plant. It’s valuable reading for those who feel they don’t have a firm grip on where the money’s going.

Today, with the able assistance of Tom’s son Thomas, Slane Marine is very busy with repairs and refits on not only Hatteras yachts but other brands as well. Located in High Point, the original home of Hatteras Yachts, the Slanes have been fortunate to hire from an experienced labor pool of former Hatteras employees. In a recent conversation with Thomas, the building was well occupied by four Hatteras 36 (11m) sportfishermen, a Hatteras 53 (16m) being extended to 58‘ (17.7m), and its first new construction, a handsome four-stateroom Slane 62 (19m). Power comes from twin D-13 Volvo Penta diesels with IPS pod drives for an “efficiency cruise” speed of 30 knots burning 59 gph (233 lph). She was designed in-house.

The outside skin is vinylester resin, while the rest of the laminate is infused with dicyclopentadiene (DCPD) resins. The hull bottom is solid fiberglass, and the topsides and superstructure are foam cored.

For about two decades now, boats tightly swaddled in #4 low-density polyethylene (LDPE) shrink-wrap have been a common sight in marinas and service yards around the world, especially in wet… Read more »