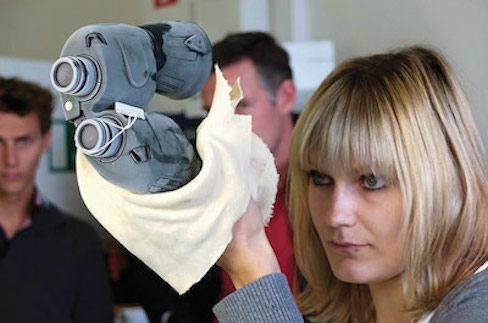 Even at very low temperatures, no signs of internal fogging are allowed by Steiner-Optik’s quality control.

The leading manufacturer of marine binoculars worldwide, Steiner-Optik, was founded in 1947 in Bayreuth, Germany, by Karl Steiner, an engineer from Zeiss. Steiner’s first product was a compact camera called the Steinette, and in spite of the difficult postwar time, the one-man company grew to 50 in six years; today it employs 140. But Steiner soon realized that high-end binoculars, not cameras, were his company’s real future. A decisive year for Steiner’s business was 1965, when the German army recognized it as an important equipment manufacturer, and when a partnership with Bayer helped to develop a revolutionary thermoplastic housing material, now famous under the trade name Makrolon. Unbreakable, non-corroding, and shock-resistant, Makrolon helped in the manufacture of extremely tough binoculars that weighed just a fraction of conventional instruments. The first nitrogen-filled binoculars, virtually fog-free, were introduced in 1973. In 1979, Steiner invented the first marine binoculars integrating a magnetic compass, specifically balanced for four world zones, from the North to the South Pole. 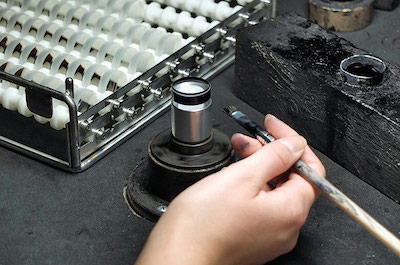 To achieve the best image purity, the edges of all lenses are carefully blackened by hand to prevent any light reflection

During the last decade, Steiner expanded into different markets including defense, hunting, bird-watching, and outdoor sports; today, its marine offerings are a quarter of the 150,000 units produced every year in the Bayreuth factory. In 2008, the family-owned company became a 100% subsidiary of the Italian Beretta Holding group, which helped develop new opto-electronics technology. Two years ago, engineers designed the Commander Global, the first marine binoculars to integrate an electronic compass module, which gives the same bearing precision all over the world. Measurement is analogically superimposed on the lower edge of the image. Last year, Steiner introduced laser range-finding binoculars, with exact range measurement up to 1 mile (1.6 km), appearing directly on the image. A scan mode helps to follow nonstationary targets. 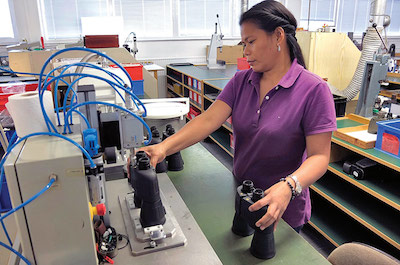 All marine binoculars are filled with a nitrogen-helium mixture and pressurized to 14.5 psi to prevent fogging.

Production is done mostly in-house, especially the optics and assembly, but thermoplastic molded parts, compasses, and laser modules come from specialized subcontractors. Manufacturing follows six steps, which involve a huge amount of handwork under rigorous quality control. Raw glass parts from Schott and Hoya are ground and polished to the shapes of various lenses. Achromats (lenses that limit the effects of chromatic and spherical aberrations) and prisms are then cemented with a special optical glue, and lens edges are blackened to prevent internal light reflections. Optics are then thoroughly cleaned prior to the high-vacuum coating process, where thin layers of metallic compound are laid on the glass surface. Coating deposits, in six to 40 layers, are critical for the best contrast, color purity, and light transmission. For that reason, this process is one of the rare trade secrets of the Steiner factory. Optical elements and housing parts are joined, mostly by hand-gluing, followed by several final quality control operations. Samples taken from the production line are tested in a freezer at –4°F (–20°C) and in an autoclave at 140°F (60°C). Watertightness is tested in a pressurized water container that simulates a 15‘–30‘ (4.6m–9.1m) immersion for 10 minutes, waterproofing standards for all Steiner marine binoculars. All models are factory guaranteed for 10 to 30 years, except for moving parts.