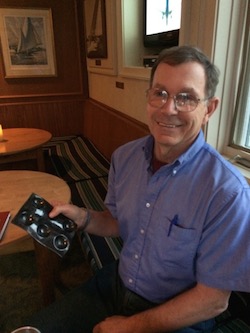 Steve Savoie, engineer for Lyman-Morse Technologies, shows off a sample thermoplastics part. According to Savoie, thermoplastics are of particular interest to the Maine boatbuilder’s nontraditional customers in the sub-sea and ROV markets.

The enterprising and innovative forays of boatbuilders and yacht designers beyond the marine sector have been well documented through the years: Nathanael Herreshoff made steam engines; W. Starling Burgess created the Dymaxian Car and constructed early airplanes. Before closing in 1949, The Electric Launch Company, or ELCO, manufactured wood-paneled station wagon bodies and bowling pins. In the second half of the 20th century, Everett Pearson and TPI built everything from wind turbine blades to bus bodies and portable toilets.

“Boatbuilders are good at building things efficiently and with little oversight,” said Henry Elliot, the lead instructor of the composites technology program for the International Yacht Restoration School in Newport, Rhode Island. “There’s not a lot of adult supervision. Boatbuilders just do it. You have the freedom to do it alone and to screw up. You couldn’t build a car or a plane this way.”

For boatbuilders, diversification offers opportunities to develop advanced technologies—and to grow. At Lyman-Morse, a century-old boatbuilding company in Thomaston, Maine, with 75 employees (Professional BoatBuilder No. 115), a non-marine division established in 2012 now represents 15% of the entire business, according to president Drew Lyman.

“Non-marine fabrication and non-marine composites are what’s driving the division’s growth,” Lyman said. “Because we’re smaller we can be flexible and react quickly.”

I asked Steve Savoie, business manager/engineer for Lyman Morse Technologies, about the work he’s doing when I caught up with him during a recent business trip he made to southeastern New England. Savoie’s background makes him well suited to the job at L-M: as well as holding a degree in naval engineering from Purdue University, he spent two decades in the U.S. Coast Guard.

Among ongoing projects at Lyman-Morse Technologies (the name for the company’s non-marine division) is a composite radar dome which, affixed to the nose of a research jet, evaluates advanced radar systems for military aircraft. The company has also been fabricating stand-alone heated matched aluminum tooling to support its efforts in streamlining thermoplastic composites process development. Thermoplastic composites is an area of interest to several L-M customers, according to Savoie, particularly in the sub-sea and ROV (Remotely Operated Vehicles) markets.

“We’ve been getting into some bizarre stuff,” Savoie said, adding that he and L-M colleagues don’t get details about the products’ end use, but clients’ standards are demanding and they enjoy the ease at which L-M can handle last-minute changes and requirements.

Such work has helped to fuel the development of advanced technologies like high-temperature RTM (Resin Transfer Molding) at Lyman-Morse. The system’s processing temperature of 400°F at 300 psi is necessary for applications that require high temperature and an absence of voids.

Savoie is also assisting L-M marine division colleague Steve Crane in a project fabricating composite mold tool sets to be used for casting concrete components of portable toilets for humanitarian agencies serving several African countries. The molds make it possible for the portable toilets to be constructed on-site at low cost with local labor. Separately, Crane also recently delivered a series break down of composite structures to be evaluated for field use by the U.S. Army.

“We can crank out prototypes at a decent cost because we’re small,” he said, adding that the company’s new three-axis milling machine also enhances the mold-processing capabilities. The $200,000 machine fashions prototypes with a precision of several thousands of an inch.

About the Author: Elaine Lembo is the seminar manager for IBEX, the International BoatBuilders’ Exhibition and Conference, which is owned and produced by Professional BoatBuilder magazine and the National Marine Manufacturers Association.