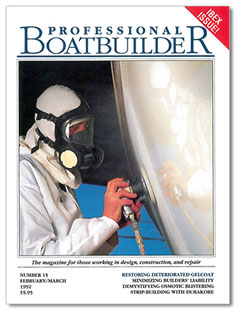 The debut of the International Boatbuilders’ Exhibition and Conference in 1992 included an educational session on the now mostly eradicated problem of osmotic blistering (also covered in the show issue of Professional BoatBuilder, above).

In 2015, IBEX, founded by Professional BoatBuilder magazine, marks its 25th show on September 15-17 in Louisville, Kentucky. Longtime Professional BoatBuilder editors Paul Lazarus and Dan Spurr weigh in on the evolution of methods, materials, and construction of recreational boats as portrayed by the seminar series, through which thousands of marine trades professionals have gained technical expertise and advice.

What Took Off, What Didn’t

Paul Lazarus, senior editor, has been with Professional BoatBuilder and IBEX since the beginning of both, in 1989 and 1992, respectively. He shared these observations:

At the first IBEX, the seminar program focused on what were hot topics at the time in building and repair: blisters, core installations, resin technology, the threat of thermoplastics, how to best market designs for power and sail. Since then, the blister problem has been basically solved; ditto, core installation, thanks largely to vacuum-bagging. Resin technology has moved away from dead-simple polyester; thermoplastics never really took off beyond paddlesports and very small craft; and marketing is now a multimedia undertaking, with the rise of the Internet favoring social media.

Note, too, that the first IBEX limited its sole look ahead to the year 2000—a flash forward of just eight years. It makes a 25-show comparison of the 1992 seminar lineup with 2015 either unfair or useful as a reminder of the conservatism inherent in the marine industry. Two CEOs in the 1992 keynote forum headed companies that were resin-infusing production boats; today, a slew of boat companies across the spectrum are resin-infusing composite parts, large and small. Other forms of closed-molding are now commonplace. Wet-pregs have entered a few production shops (though I’d have expected more to do so by this time; see my feature “Fabric Impregnators,” PBB No. 5); in custom shops, prepregs are nearly routine for building high-end one-offs.

Computer-aided design and manufacture are ubiquitous. Resin chemistry, styrenated and otherwise, has improved laminate reliability throughout the range of composite boatbuilding. A bank of federal environmental regulations effectively cleaned up the most harmful practices and processes in boatbuilding, irrespective of construction medium (see “New Regulations in the Work Place,” PBB No. 1). Carbon and Kevlar have ceased to be exotic fabric reinforcements (though they’re still expensive). Cored construction is far better understood; SAN foam emerged as a breakthrough product. Cold-molding and its wood/epoxy composite variants are competitive in the marketplace, even if they continue to constitute an ethnic minority among boat types.

During the intervening quarter century between the first IBEX and the 25th, a revolution has occurred in marine electrical systems (including electronics). Much the same can be said for propulsion technology (diesel engines, gas outboards, inboard pod drives).

Sessions on computer-aided boat design and manufacture have been an IBEX staple since the first show and continue to be popular as the technology progresses. Here, a CMS Poseiden 5-axis CNC router shapes a female mold to precise measurements.

All of the technical developments cited above, and more, many more, have been discussed in IBEX seminars over the years; remarkably, there’s been minimal repetition of seminar topics, except those prompted by popular demand. During all this time, the defining characteristic of IBEX has hardly changed—namely, a seminar program that corresponds to editorial material in the magazine, and which complements an exhibit hall (think: advertisers) containing vendors to the trade. Or, as we said in the beginning: a three-dimensional version of Professional BoatBuilder.

Problems and Solutions, Old and New

Dan Spurr, editor-at-large since 2003, picks three specific seminars from 1992 and 2015 to lend perspective:

In 1992 osmotic blisters on hull bottoms were still an industry problem, though solutions such as epoxy barrier coats were dealing with it. Today, the causes of blisters are much better understood, and use of materials such as vinylester and epoxy resins has gone a long way in reducing the incidence.

Despite efforts by organizations such as ABYC, corrosion remains an industry concern, not because its causes are a mystery, but mainly by the lack of knowledge in the field. Thanks to industry efforts to improve training of marine electricians and repair technicians, and via articles in Professional BoatBuilder, improvements are being made.

703: Offshore Safety Standards: How to Measure Desirable and Undesirable Characteristics of Offshore Sailboats

Following the loss of yachts and lives in the 1979 Fastnet Race, a concerted effort was undertaken to better understand and define critical design and engineering issues with offshore racing sailboats. Much attention was focused on limits of positive stability, and designers today are creating safer boats. But as materials change, engineering is always playing catch-up: keels and bulbs still occasionally fall off, with sometimes tragic consequences.

As evidenced in PBB articles by NDT experts such as Roby Scalvini, there have been great strides in examining the integrity of composite structures. These technologies either didn’t exist in 1992, or were not adaptable or found in the marine industry.

207: Design and Build to Minimize the Spread of Aquatic Invasive Species

While the transport of invasive mollusks and fish from one body of water to another, sometimes with disastrous environmental results, has occurred for years, this is the first time in my memory that anyone has suggested boatbuilders could help with the problem.

304: Risks and Rewards of Lithium-Ion Batteries

To the best of my knowledge, this technology didn’t exist in 1992. In just a few years it has become relevant to boat owners, though not without expense and safety warnings.

To see the seminar lineup from IBEX 1992, click here.

To see the seminar lineup for IBEX 2015, click here.

About the Author: Elaine Lembo is the seminar manager for IBEX, the International Boatbuilders’ Exhibition and Conference, owned and produced by Professional BoatBuilder magazine and the National Marine Manufacturers Association. This story is part of a series of her conversations with the dozens of boatbuilding, engineering, and materials experts who will present 56 seminars at IBEX 2015 in Louisville, Kentucky. For details, log on to the show site www.ibexshow.com.