From “Rovings,” Professional BoatBuilder No. 156
Compiled by Dan Spurr

They seem to be everywhere these days, often declaring the obvious: the presence of nuts in a nut mix, the risk that sleeping pills will make you drowsy, and that pepper spray may be an eye irritant. Warning labels of dubious necessity are largely driven by manufacturers’ understandable desire to avoid liability. Boatbuilders are not immune to the trend. A survey of readily available printed caution and warning labels on boats includes directives to secure unoccupied seats, to tie lift slings together when lifting the boat, to keep a lookout as required by the Coast Guard, to reduce speed before making sharp turns, and prohibitions on “horseplay” and “diving or jumping.” One even specifies: “Remove carpet before transporting or damage from blowing off could result.”

The proliferation of such labels led most boat owners and operators to blow off the confusing warnings and gave rise to a legitimate discussion about their efficacy as far back as the late 1990s. In April 2015 the American Boat & Yacht Council (ABYC) introduced new standardized warning labels, available to anyone, that could improve what had become a source of confusion and liability for boatbuilders. 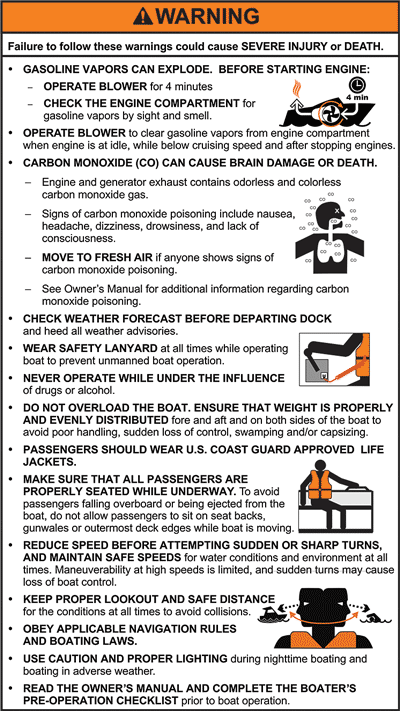 “By 2003 it became apparent that boatbuilders were individually responding to lawsuits and creating labels for specific standards,” said John Adey, president of ABYC. Then in 2005 the State of California, responding to accident and fatality data, required a carbon monoxide warning on boats and hired forensic investigation specialists Design Research Engineering (DRE) to design it—a two-and-a-half year process.

About that time, spurred by an effective single-warning-label concept adopted by personal watercraft manufacturers and some press about label pollution, ABYC pursued a USCG grant to develop universal labels, but the project was not funded. In 2007, industry funded the first part of the accident analysis. Label development remained shelved until 2012, when funding from the USCG and ABYC enabled the council to take a comprehensive look at the upward of 60 labels cited in its own standards.

The group’s Product Interface Committee, comprising more than a dozen members including boatbuilders, accessory and engine manufacturers, sur-veyors, and marine trades organizations, was charged with evaluating a report from DRE on the frequency and severity of boating accident types in the U.S. Using those data and analyses, the committee prioritized risks based on their frequency and severity, and then divided a boat into the four best areas to locate warnings: the helm, the occupant or seating area, the cabin, and the transom. DRE helped redesign standardized warning labels appropriate for each area, eliminating the clutter of their different shapes, styles, and colors.

The sample warning (above) intended for helm station installation on a gasoline-powered inboard, starts with the risk of fatality from explosion of gas vapor. Adey explained that the specific warnings are listed in hybrid order based on operations and descending frequency and severity, ending with a seemingly bland reminder to read the boat owner’s manual.

The list is shorter than the accumulated warnings at the helm of some production models, and its appearance is consistent. Some warnings were not common before, including the reminders of laws not to operate under the influence of alcohol and to have approved PFDs on board. Some seem like common sense, such as checking the weather forecast and distributing passenger loads. But, Adey says, they are all based on a deep analysis of accident data that no single boatbuilder could have undertaken alone.

Warning labels are available to download free of charge from the ABYC website and printed versions can be ordered as well. And while not all the warnings on the various labels are required by law, or even by ABYC standards yet, Adey cautions any builder: “Before you decide to change any one of these, you better be sure you have a good reason for it.” Because the warning package is the outcome of an extensive research and design effort conforming to the ANSI Z535 labeling standard, the suggested labels will be very defensible for the builder in the event of an accident.