From “Rovings,” Professional BoatBuilder No. 156
Compiled by Dan Spurr 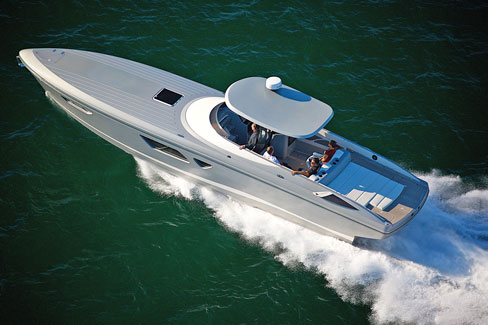 Bill Prince Yacht Design customized a standard Schiada Super Cruiser 43 (13.1m) for a client in the Middle East who required a fixed hardtop that could withstand high speeds and a harsh climate

Yacht designer Bill Prince recently saw the launching of Black Diamond, a custom version of a 43‘ (13.1m) production model built by Schiada Boats in Long Beach, California. Capable of 78 knots, the high-performance cruiser will visit the Florida Keys and Bahamas before jumping the pond to Kuwait next year.

Of interest is the hardtop, which Prince says is “a requirement for the harsh climate of the Persian Gulf, as no conventional bimini top will withstand the high speeds this boat achieves. The hardtop’s wishbone-shaped supports are anchored to the main hull longitudinals and encapsulate the helm and passenger seats. Due to the aerodynamic and structural forces involved, this is the most thoroughly engineered ‘small part’ I’ve seen on any composite boat in my 19 years as a yacht designer. 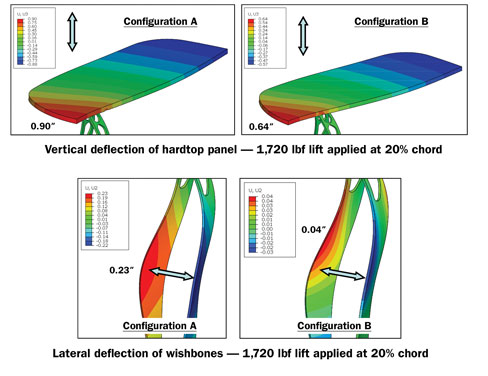 The hardtop, requiring careful calculations so it would not affect the boat’s performance, creates just 24 lbs (11 kg) of lift at 77 knots. The supporting wishbones were made up of 18 layers of carbon fiber.

“We designed the hardtop with the main engineering goal of generating as little lift or downforce as possible at air speeds of up to 105 knots (120 mph) through a range of pitch angles. As you may know, the rear wing of a car like a Porsche 911 generates hundreds of pounds of downforce at high speed in order to plant the car to the road. We did not want the hardtop to affect the performance or handling of the boat. This hardtop is huge compared to the small wing on a car, so we designed the shape using computational fluid dynamics, which is essentially a digital wind tunnel. The final result? Just 24 lbs [11 kg] of lift at 77 knots.

“The four wishbones which support the hardtop consist of 18 layers of carbon fiber. Since they are compound curves, we developed a proprietary liquid core, which was poured into the molds once the laminates were ready. The final lamination calculations for these components were done by an aerospace engineer who has spent 20 years designing carbon fiber satellite chassis for NASA. These wishbones are strong enough that the entire boat can be lifted from them, should one be so inclined.” 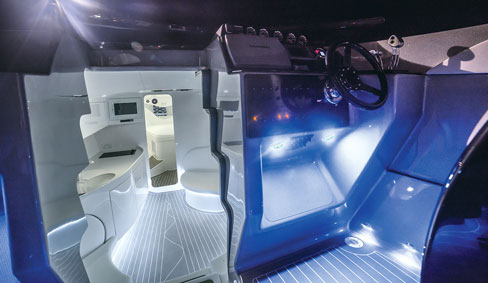 Prince also modified the deck tooling to add headroom, created a new interior, specified systems, designed the internal structure as well as other features such as an articulating swim platform, and cockpit furniture to create the “flowing” look the client wanted.

Based in Wisconsin, Prince earned a bachelor of science degree in mechanical engineering from the Milwaukee School of Engineering, and interned in the office of Timothy Graul Marine Design, in Sturgeon Bay (see “General Practitioner,” PBB No. 110), before spending three years, 1997–2000, at Michael Peters Yacht Design (Sarasota, Florida). He then moved to Newport, Rhode Island, to work for Ted Hood as a design engineer, and subsequently the same position at Island Packet Yachts, back in Florida. He opened his own office in 1995. Today he has a staff of five, including marine engineers and naval architects. 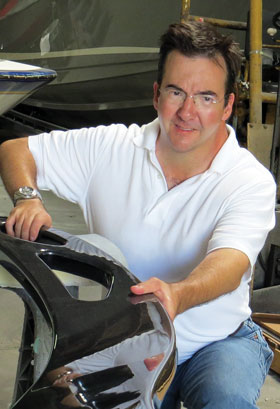 Prince, who has a degree in mechanical engineering, worked for Timothy Graul, Michael Peters, Ted Hood, and Bob Johnson (Island Packet Yachts) before opening his own office in 1995.

Schiada Boats, founded by Leonard Schiada, who died January 8, 2015, has been building fiberglass powerboats since 1963. The current owner is Lee Spindler. In addition to the 43, other production models range from the 21‘ (6.4m) River Tunnel to the 32‘ (9.8m) Offshore speedster, available in various configurations.

The standard Super Cruiser 43 weighs 11,500 lbs (5,210 kg), has a beam of 9‘6“ (4.48m), and is constructed of vinyl-ester resin, E-glass, and balsa core, all vacuum-bagged. Stringers and bulkheads are capped with carbon, while interior components are foam cored.