When Marnix Hoekstra and his colleagues at Vripack compare the V20, a solar-powered wing-in-ground (WIG) hydrofoiler, to Formula 1 racers, it seems a bit of a contradiction. After all, how can a designer address both sustainability and speed? Wouldn’t one be sacrificed for the other?

Not necessarily. Just like in Formula 1, the techniques tested and developed for the V20 could benefit the wider industry. And so while the boats are small (6m/19.7′), this one-design racing class is one of the most important projects for the renowned Dutch design firm (Sneek, The Netherlands), according to Jeroen Droogsma, manager of Vripack’s design studio.

“She provides our team with information about new techniques that could be very interesting for bigger yachts as well,” says Droogsma. To share some of those insights, Hoekstra will be presenting a session on the V20’s design at this year’s IBEX in Louisville, Kentucky, on Sept. 15.

“It is all about hull optimization,” explains Droogma. “That factor alone is far more important than any other green initiative, be it on these very light solar-powered yachts or the biggest of superyachts. Get the hull right, and the consumption will drop dramatically no matter what the size of the yacht.”

As a one-design class, the solar-powered boats are identical, with several exceptions. Following class rules, teams can choose different options for foils and propellers, or larger versus lighter-weight batteries. 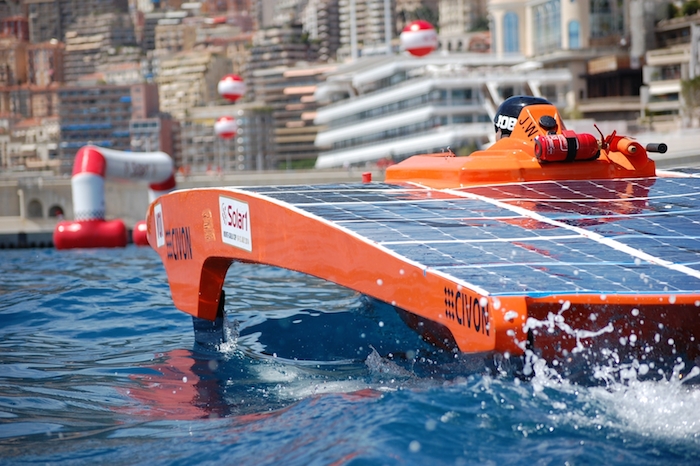 The solar panels that cover the V20’s hulls convert solar power directly to an electric motor (4 kW/5.4 hp), or store it in a lithium-ion battery.

You can buy plans for the V20 for €5,000 (about $5,500). As of this writing, five V20s exist, powered by flexible solar panels that cover their decks. Those panels either convert solar power directly to an electric motor (4 kW/5.4 hp), or store it in a lithium-ion battery; the battery management system can assist the pilot in determining ideal speed. It is also possible for the V20 to run entirely on the sun’s energy and recharge the battery at the same time.

The idea for the V20—the world’s first one-design solar class—came from an already-established solar competition. In 2006, the Frisian Nuon Solar Challenge (now called the DONG Energy Solar Challenge) began in The Netherlands with three design classes. The top class has almost no restrictions, allowing teams to choose their own solar panels, while the A-class is a one-man class with solar panels supplied by the organization, and the B-class is a two-man class also with supplied solar panels.

After competing in the A-class for six years, however, Vripack wanted to move away from a design focus that tended to favor the biggest budget, and instead emphasize things like driver skills and tactics.

“We realized that if we created our own one-class design, more and more people could compete, and as a result, technology would exponentially move toward R&D on the foils and props,” says Droogma. “The solar power simply squeezes the available energy far enough that you must look in a direction other than putting bigger and bigger engines in a boat.”

Watch the V20’s first test run in the video above. Additional information can be found at www.vripack.com/portfolio/v20 and www.solar1races.com.

About the Authors: Elaine Lembo is the seminar manager for IBEX, the International BoatBuilders’ Exhibition and Conference, owned and produced by Professional BoatBuilder magazine and the National Marine Manufacturers Association. This story is part of a series of her conversations with the dozens of boatbuilding, engineering, and materials experts who will present 56 seminars at IBEX 2015 in Louisville, Kentucky. For details, log on to the show site www.ibexshow.com. Melissa Wood is associate editor of Professional BoatBuilder.