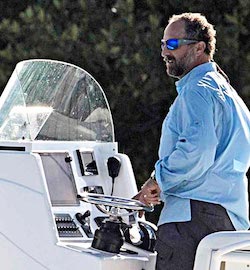 According to naval architect Rob Kaidy, above, the Titanic is a classic case study because the dilemmas its designers faced, including known risks and compromises that were made because of financial pressure, are alive and well today.

Like anyone else, Rob Kaidy likes a good night’s sleep. Yet the moral issues that have cropped up over the years in the career he loves—that of a naval architect designing everything from 950’ (290m) ships for the U.S. Navy to a 12’ (3.7m) fishing Micro Skiff—have certainly kept him awake and compelled him to promote sound and safe yacht design.

“My job is to be a naval architect, and my ethical burden is to execute that responsibility,” he says. “Standing up for safety against strong customer demands can be very difficult. However, it’s exactly at the moment when it is most difficult to stand before your customer that it is most needed. This is moral, ethical behavior. This is bravery in the context of being a naval architect.”

In that context, he explains, bravery may require that you stand up to the people who pay your mortgage and feed your family by telling them they’re wrong.

“At this time you must defend the interests of mothers and fathers, wives and husbands, children of a crew that is relying on you for their safety and lives when far from safe harbor, when the sea is angry, and returning alive can seem a remote possibility,” he says. “Standing up to a recalcitrant customer because it’s the right thing to do seems a small and unbrave act in the face of 10’ [3m] waves and a howling gale, but it is one and the same.” 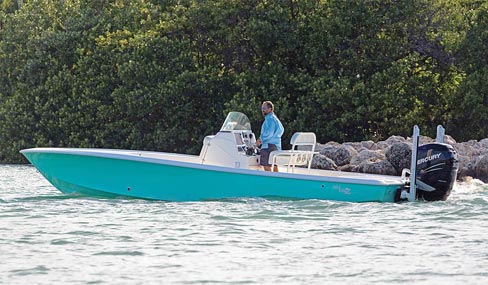 Probably few are more qualified to expound on the topic. Kaidy’s education in aerospace engineering was a prelude to years of designing for production and custom clients, from Pursuit and Boston Whaler to SeaVee Boats, where he currently serves as vice president of engineering. An industry leader, he’s a recognized expert in small-craft naval architecture, with specialties in composite structures, small-craft stability, and hull design.

Ethical issues in yacht design predate Kaidy and never cease to beg for redress, perhaps most importantly in retrospect, for their historical lessons. One look at the handout for his IBEX 2015 presentation, seminar 203 “The Designer’s Dilemma: Ethics in Boat Design and Engineering” and you’ll see artwork from that marvel of marine misengineering renowned for the tragic headlines it inspired and the 1,490 lives it sacrificed—the RMS Titanic.

It’s a classic case study, according to Kaidy: “Vessel designed with insufficient watertight subdivision and insufficient lifeboats. Subject to progressive downflooding. Number and location of lifeboats problematic. Risks known to naval architects and approval bodies. Lifeboat number and arrangement risks known. Largest vessel built at time carried tremendous prestige and pressure to approve designs and fitment. Possible that the financial and political pressure to launch the ship caused compromise in the safety of the design.”

“Following the ‘accepted practice’ could get someone killed,” he said. “Question everything.”

More detailed examples—some actual, some notional—will be shared throughout his seminar at the show, running from Sept. 15 to Sept. 17, 2015, in Louisville, Kentucky.

“These moral and ethical questions can be broken into categories: safety of life at sea; human mistakes; vendor relations; billing; reality versus owner’s desires; marketing; timing and scheduling; regulatory compliance; and intellectual property. Issues dealing with each of these areas many times are moral or ethical. At IBEX, I’ll address examples in each of these categories, and how you identify the right and wrong in them, and how you steer through the rocks of the decision.

“I’ll also discuss oaths and codes of conduct from the Society of Naval Architects and Marine Engineerings, American Society of Naval Engineers, ABYC, NMMA, RINA, and others in the alphabet soup of civil societies.”

About the Author: Elaine Lembo is the seminar manager for IBEX, the International BoatBuilders’ Exhibition and Conference, owned and produced by Professional BoatBuilder and the National Marine Manufacturers Association. This story is part of a series of her conversations with the dozens of boatbuilding, engineering, and materials experts who will present 55 seminars at IBEX 2015 in Louisville, Kentucky. For details, log on to the show site www.ibexshow.com.