This computer rendering shows the ’thwartship internal structure through which the Dynamic Stability Systems (DSS) hydrofoil is moved port and starboard, always deployed to leeward.

The rapid development of so-called sailing foilers has drawn much attention in recent years, notably the Moth class and the impressive yachts of the 34th America’s Cup, held on San Francisco Bay in 2013. And in the last issue of Professional BoatBuilder, No. 156, the extensive research that went into Gunboat’s production foiling cruising catamaran, a first, was unveiled in “Flight Engineering.”

All the while, for the last 10 years British designer Hugh Welbourn has been working hard to develop a retractable horizontal hydrofoil that slides, as it were, across the center of the boat, projecting to leeward. It seems to be an invention that, when incorporated into the design and engineering of a boat from the beginning, yields a reasonable and beneficial improvement in performance. But it doesn’t have to be an original feature. Indeed, a foil from Welbourn’s company Dynamic Stability Systems (DSS) was retrofitted to the 100‘ (33m) Wild Oats XI, which captured line honors in the 2013 Sydney Hobart Race. Protruding below the waterline and extending 7‘ (2m) on the leeward side, the foil provided 8–9 tons of vertical lift. Wild Oats crew said it improved control in extreme conditions, lifted the bow 12“ (300mm) in steep seas, which helped them get up on waves and surf longer, and resulted in a 5% gain in speed overall. 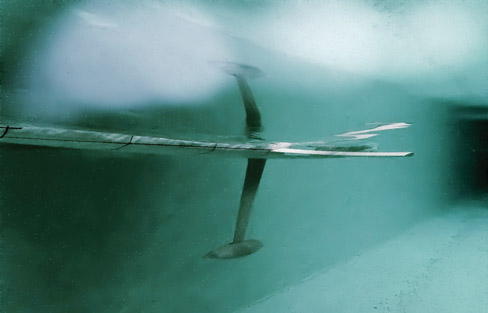 An underwater photo of the horizontal DSS hydrofoil being tank-tested in Europe. The boat’s fin keel and bulb also are visible.

But Welbourn and team are emphatic that the benefits are even greater on a purpose-built hull, where form stability isn’t quite as important, and less volume is required in the bow. Such is the case with partners U.K. builder Infiniti Yachts and Quant Boats of Switzerland, all fitting new boats with DSS hydrofoils designed by Welbourn.

Regarding foil shape, Welbourn says, “All foils are speci-fically designed by me for the particular project, whether the DSS foil, fin, canard, or rudder. I’ve been designing my own foils for many years now, have modified foils in Olympics classes (three golds so far) and many other world-championship-winning designs. Every section and foil, though, is configured to suit that individual boat and mission profile.” 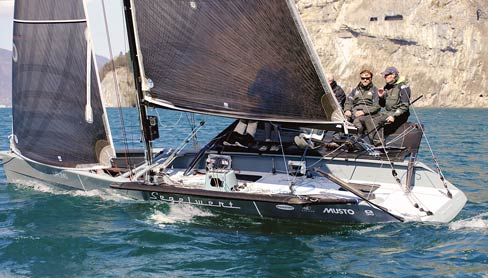 A Quant 30 (9.1m) keelboat with the DSS hydrofoil deployed to leeward. It is somewhat visible underwater amidships. The smaller Quant 23 (7m) keelboat recently went fully airborne with the addition of a T-foil rudder.

A Quant 30 (9.1m) keelboat with the DSS hydrofoil deployed to leeward. It is somewhat visible underwater amidships. The smaller Quant 23 (7m) keelboat recently went fully airborne with the addition of a T-foil rudder.

Deployment mechanisms also vary by boat. On the Infiniti 36 (10.9m), Welbourn says, a mechanical rack-and-pinion drive is employed, with “clamping drive rollers, and direct string pulls that can be manual or hydraulic.”

In a further development, a Quant 23 (7m) hull went fully airborne with the addition of a T-foil rudder, possibly making it, the company claims, the first “full foiling keelboat.”

And with news that IMOCA Open 60s (18.3m) can now be fitted with DSS foils, it seems Welbourn’s mission impossible is now mission complete.