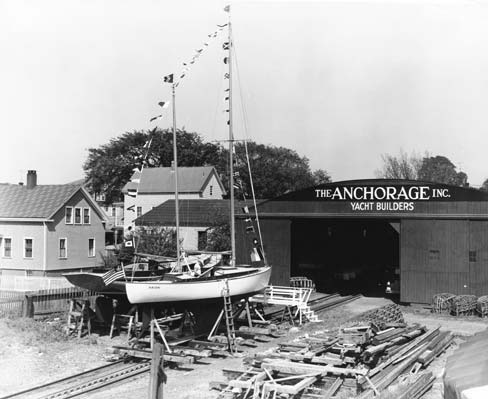 The 42′ (12.8m) Arion is probably the first fiberglass auxiliary sailboat ever built. She was launched in 1951 at The Anchorage, in Warren, Rhode Island.

Ostensibly the first fiberglass auxiliary sailboat ever built was Arion, built by The Anchorage, in Warren, Rhode Island, and launched in 1951—a narrow distinction perhaps, but of historic significance nevertheless. The 42‘ (12.8m) Sidney Herreshoff design displaced just 10,500 lbs (4,757 kg), with nearly half in the 5,000-lb (2,265-kg) keel. The hull was laminated almost entirely of fiberglass cloth—10 to 21 plies—with some mat added in certain areas. The deck was 3⁄4“ (19mm) plywood. Builder Bill Dyer estimated construction took 400 man-hours. 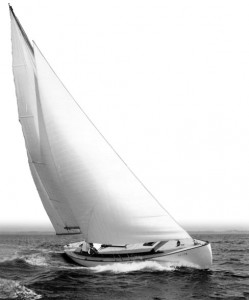 Designed by Sidney Herreshoff, Arion is a fast and slender double-ender.

Arion, lying fallow in a field, was happened upon in the 1990s by Cape Cod boatbuilder Damian McLaughlin, who was able to procure rights to her and gutted what was left of the interior and refit her with a new deck, interior, and rig. She next came to my attention last July, when Heather Holloway wrote to say she was documenting another refit at the yard of Taylor and Snediker Yacht Restora-tion, in Pawcatuck, Connecticut. She said new owner Steve Frary, who has had Arion since 2011, decided to return her to the original specification, with a new deck and house, cockpit, interior, and 1950s-era bronze hardware. 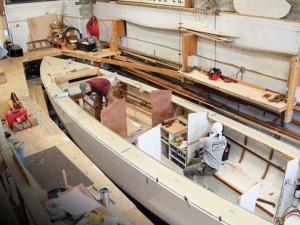 Arion’s new owner decided to restore her to original specifications. The work is being undertaken by Taylor and Snediker Yacht Res­toration, in Pawcatuck, Connecticut.

North of the border, PBB contributor Rob Mazza recounts in the November/December 2015 issue (No. 247) of our sister magazine, WoodenBoat, the story of Metro Marine, in Oakville, Ontario. In 1961, the crew, which included Erich Bruckmann, built among many others, the 32‘ (9.1m) Pipedream motorsailer using strip-planked cedar bead-and-cove construction. Mazza writes that designer/builder Dick Telford “felt that the new waterproof resorcinol glues allowed the building of bead-and-cove strip-plank hulls that were essentially monocoque construction, which would never distort or leak.” Also of interest was Telford’s inside-out method in which the interior and all systems were completed before planking of the hull was finished. This was particularly attractive for exhibition at a 1961 open house.

Pipedream was built inside out: the interior and systems were installed before planking of the hull was finished. 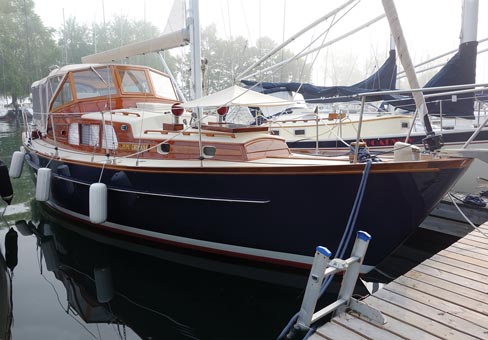 Owned by three sisters, Pipedream, now 54 years old, is still in great shape, thanks to annual “spa treatment” from Mark Bruckmann, the son of her builder.

Years later, in the 1980s, Bruckmann, who for some years managed the C&C Custom shop, employed the same bead-and-cove method for building wood plugs for fiberglass yachts. Later he founded his own shop, Bruckmann Manufacturing, with son Mark (see “Survivor III,” PBB No. 139). Mazza reports that Pipedream is now owned by three sisters, Margaret, Mary, and Joan Brennan, who each winter send her to Mark Bruckmann for “spa treatment.”

These parallel stories—one in glass, one in wood—speak to our love of boats, the skills unique to designing and building them, the appreciation and respect for “the old ways,” and the hard-headed determination to preserve what once was lost, and what never should be.