from “Rovings,” Professional BoatBuilder No. 157 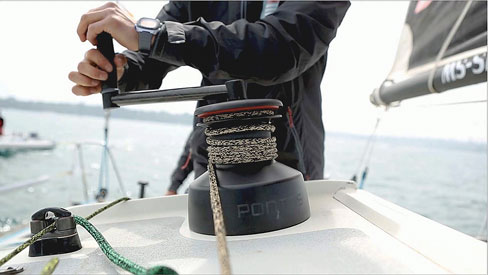 The Pontos Grinder 40 is an innovative four-speed winch that looks to be a game changer for high-performance sailers, where more power and faster retrieval speeds are important.

It doesn’t seem so long ago that three-speed winches for trimming sails were introduced by major manufacturers like Lewmar, Harken, and others. Just as lower gear ratios on bicycles enable one to pedal uphill more easily, lower gear ratios inside winches require less strength from the crew to trim headsails and mainsails. Lower gears also mean slower speeds, but it’s a calculated and worthwhile trade-off.

And if three speeds is a significant improvement over two speeds, then four must be even better.

That’s what French sailors Michel Chenon and Darryl Spurl­ing thought after a “tight-tacking, hair-raising episode in the narrow straits of Brehat.” To blame was an underpowered winch.

According to their website for Pontos Americas, the pair spent the next three years rethinking the winch. The result of their research and development is not just the addition of a fourth gear but a different means of shifting. Three models are offered: the four-speed Grinder and Trimmer, and the two-speed Compact. Power ratios range from 6:1 to more than 50:1.

Without an exploded drawing to show the guts of the new Pontos winches (they were introduced in 2014), it’s a bit difficult to explain the operation. According to the website, Pontos four-speed winches use “a clutch and trigger mechanism that allows seamless—and intuitive, with a simple change of direction in the winch handle—engagement of two extra gears. The patented trigger mech­anism moves up and down in the drum housing to engage the clutch; as load decreases, the clutch automatically moves back down. This clutch system provides two additional speeds. In the Grinder those speeds are put to use to provide faster line handling; in the Trimmer those gears are used to provide more power for the same winch size when handling lines.”

Line recovery is also accelerated. The size 40 Grinder in Ultra-fast 1 mode brings in an astonishing 70 cm (27“) of line with each rotation, making it less necessary to bring in slack line by hand.

Product acceptance is the ultimate proof of concept, and Pontos is quickly establishing itself in the field, or rather on the water. Famous French offshore multi­hull racer Loïck Pey­ron installed Pontos winches on his classic trimaran, Happy; nine skippers in the 2014 Route de Rhum race opted for Pontos; and the winches won SAIL magazine’s Freeman Pittman award for innovation.