We recently received correspondence from our old friend Kiko Villalon (founder of Marine Concepts; see “Out of Cuba,” PBB No. 114), writing to share thoughts about several of his old friends moving on: 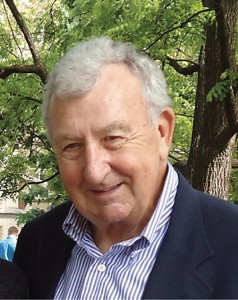 Bill Ek, working in the Wisconsin sales office of Arkansas Traveler Boats in 1963, met Kiko Villalon, and they became friends.

Here is an abbreviation of Villalon’s memorial: “I must make a pause today to talk about three of my old marine industry friends that have recently made a change of address into Eternity. I will take them in the order in which I met them.

“Bill Ek, oh God, do I remember him. I started working for Arkansas Traveler Boats in Little Rock in 1962, when another old industry friend, mentor, and later partner of mine, Jack Riggleman, hired me to work in the engineering department. I was a recent refugee from Cuba, living in Little Rock and desperate for a job. Traveler was probably the largest U.S. small-boat manufacturer in those days. We were headquartered in Little Rock, Arkansas, and had plants in Amsterdam, New York; Stockton, California; Adams, Wisconsin; and Peterborough, [Ontario,] Canada. Bill, who was in the sales department, operated out of Wisconsin, and I met him in 1963 when I made a trip to the Adams plant to start a quality control department. Later I would see Bill at each one of the 37 IMTEC shows I attended in Chicago. Bill was a real gentleman, and we always traded stories of the ‘funnest’ group of boat salesmen ever put together. Lots of great memories.

“I moved to Florida in 1975 and very soon, through our own industry’s Cuban underground, I was introduced to Blaine Timmer, along with other industry oldies Carlos Miranda and Abel Camacho (RIP), working for Robalo. Jim Wynne was designing for Robalo, and through him I got a contract to build their plugs and molds. That gave me the opportunity to meet with those fellows often. Blaine and I maintained a close relationship through all of his different positions in different companies, from OMC to Sunbird. Blaine always maintained the strictest business practices, and after years of being very active in the marine industry, things for both of us slowed down to encounters at the Miami Boat Show, IBEX, and other occasions.

“Ham Hamberger was a titan of our industry, a man whose name will be forever engraved among the greatest in an industry full of wonderful people. I first met Ham in 1979. A recession was on the horizon, and I prepared for the slowdown by tooling and building my own boat, the Cimarron 176. I needed Mercury to run it through their ‘Boat Test Bulletin,’ which they ran out of their Placida, Florida, test station. Ham obliged, and I made 150 boats before the recession eased off and design and development regained its demand. My relationship with Ham grew through the following years until we served together on the National Boating Safety Advisory Council (NBSAC) in the early ’90s. Later, while Ham was at Tracker, he hired me to audit its Clinton Plant and other work that followed that report. Our actual encounters diminished when Ham moved to Palm Springs [California]—but not my memories of him and the fine dinners I organized under his instructions during the years at NBSAC.

“Little can I add to the already published information on the passing of these three gentlemen friends of mine. I can only say to their families and their industry friends that I feel honored to have been a hungry Cuban refugee who had the great privilege of meeting Bill, Blaine, and Ham—and working with them.

“There are a few more ‘old coots’ like me left from those days, most of whom are still my friends. I salute them, hoping we all meet sometime at the new address.”