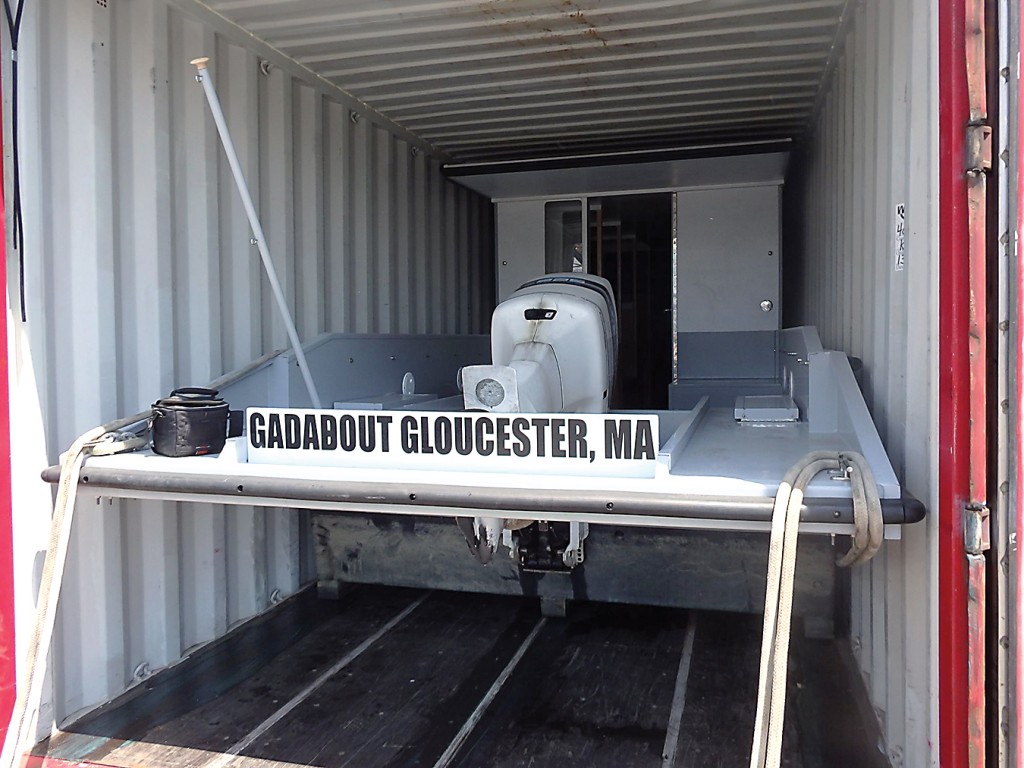 We recently heard from Susanne Altenburger, wife of the late designer and author Phil Bolger, describing a 39‘1“ (11.9m) plywood patrol boat designed to fit inside a 40‘ (12.2m) container for worldwide shipping. While I’m reminded of a similar purpose by Robert Perry’s motorsailer, illustrated in these pages a few years ago (Professional BoatBuilder No. 105, page 12), Bolger and Altenburger’s intent was to develop a prototype that the U.S. Navy might underwrite “to help poorer nations build their own riverine and inshore patrol-craft,” according to Altenburger. “Based on collaboration since 2002, the Navy approached Phil Bolger and Friends Inc. of Gloucester [Massachu-setts] to design this craft and hands-on manage the prototyping project on the shop floor.”

It didn’t work out that way. The Navy pulled out, the project was underfunded, and to recoup its investment, PB&F “sold to private interests to help recover those deficits.” The good news is that the boat was completed and has undergone sea trials, on the water and in a container. 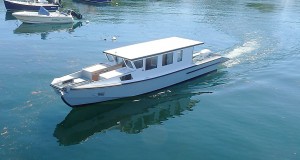 As a proof of concept, she was built by “nonboatbuilders” in Gloucester of mostly sustainably sourced materials of plywood/epoxy/fiberglass/foam composites.

In a conversation with Altenburger, she told us this was her first design without Phil Bolger, who died in 2009, and that he would have approved of her execution of the project. Not only did she design the boat, but she also performed more than half the construction—a first for her. She said Bolger favored plywood for many reasons, including simplicity and availability, and also buoyancy. Gadabout, as this craft is named, has 1 ton of positive buoyancy, thanks in part to the addition of some foam core.

Construction is not stitch-and-glue but reinforced chine logs. The entire structure is sheathed in two to three layers of 10-oz (333-g/m2) cloth, set in WEST System epoxy. Rather than scarf the Douglas-fir plywood sheets, which was considered too tricky for nonboatbuilders, so-called Payson joints were preferred, whereby channels or hollows are cut into the adjoining panels with sanders, grinders, or other tools, and the depression filled with fiberglass, which is finished flush with the surrounding wood surface. Quick and dirty, and effective.

The hullform is essentially flat, save for the “V- nose,” which Altenburger says is largely sacrificial in the event of a serious collision. Skegs assist tracking, and were greased to help slide the boat into its container. No rollers needed. “We knew it would fit the container,” Altenburger said, “but you have to give people the visual proof, or some will never believe you.”

Because the original service concept for these boats was patrol, Altenburger wanted to see how well they could stand up to gunfire. So she took sample panels to a Massachusetts State Police shooting range, where officers fired from 80 yards. The 20mm shells were not noticeably slowed, she said, adding that depending on service, steel could be added, fuel tanks protected, and crew fitted with body armor.

Phil Bolger was born in 1927 and worked as a draftsman for designers Lindsay Lord and John Hacker. In his lifetime he designed 681 boats of many types, including recreational, commercial, and military. Notable is the Rose, a full-rigged ship featured in the movie Master and Commander, based on the book by Patrick O’Brian. Bolger strongly favored simple construction from readily available materials, often plywood. Such were featured in Harold “Dynamite” Payson’s Instant Boats, and in Bolger’s own books such as Small Boats and Boats with an Open Mind.