The design for the High Speed Commuter began after a client brought his 55′ (16.8m) flybridge cruiser to Brooklin Boat Yard (Maine) for a reasonably small refit. One of the tasks was to replace every cabinet latch throughout the boat, which is an unusual request. The reason was that the owner primarily used the boat to travel at top speed from his home on Cape Cod, Massachusetts, over to Martha’s Vineyard for dinner and back in the same evening, a run of about 45 nautical miles (83 km) in each direction. This trip would take place regardless of the sea state; when it was rough, the boat would move around enough that cabinets were flying open.

The client declared on more than one occasion that his existing boat was too slow and too much mass for him and his wife and for the way they used the boat. He was looking for something more compact with better performance and a top speed of around 60 knots. He enlisted the help of a friend who designed offshore raceboats and who ultimately produced a preliminary design. When we saw the drawings we were somewhat alarmed: The boat was approximately 60′ (18m) length overall but with a beam of around 8′ (2.4m) and a full race canopy. The only nod to accommodations was a pair of Recaro racing seats bolted to the cabin sole. 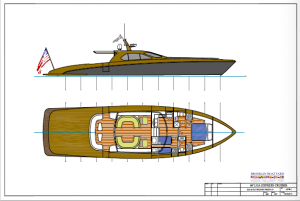 The client then asked us to restyle the deckhouse and add a flybridge. We took a stab at this but quickly concluded that what he was asking for, based on that hull, was going to be downright dangerous. We could not imagine someone banking into a turn sitting up on a flybridge that would have been about 6’ (1.8m) wide on a 60’ boat. Since Brooklin Boat Yard has in-house design capabilities, we decided to start with a clean piece of paper and present him with a design of our own.

When we presented the design, our client was immediately taken with the look. The design is rakishly styled, and would be comfortable for a couple, while being able to achieve a top speed of around 60 knots.

The accommodations include a full-beam master suite forward with private head and separate shower. The day head is accessed through the guest cabin, which has twin berths. There is a full galley below. The wheelhouse includes port and starboard forward-facing benches for helmsman and passenger, and port and starboard seating and power windows. There is a small cockpit with bench seating. Access to the swim platform is via a hidden transom stair, which is exposed by actuating a powered pantograph door.

The earlier iterations of the High Speed Commuter design included a much larger cockpit with the engines located under the wheelhouse. Our lack of experience with stepped hulls in particular and the requirement of a 60+ knot top speed meant we were going to need help. There was too much at stake to get it wrong. 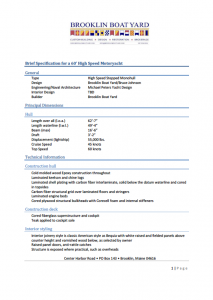 Taking this into consideration, we consulted with Michael Peters Yacht Design of Florida for the underwater hull geometry—including a double-stepped design, the propulsion package, and bottom structures—because of that firm’s experience with boats of similar performance targets. The very first thing they told us was there was no way the engines would reach the target speed if they were located anywhere but directly coupled to the drive units.

In fact, they had just completed a design with very similar proportions using a double-stepped hull and twin MTU 8V-2000 engines rated at 1,250 hp each driving Arneson surface drives.

Construction is to be a combination of fiberglass deck and cockpit, cold-molded laminated wood utilizing WEST System epoxy resin and vacuum-bagging techniques, with clear-coated carbon fiber below the sheer.

About the Author: Bruce Johnson is the director of business development for Brooklin Boat Yard, Front Street Shipyard, and Rockport Marine.

ProBoat Drawing Board is a place for designers and naval architects to share new designs, ideas, details, and aesthetic or engineering head-scratchers with other Professional BoatBuilder magazine readers. We invite you to submit your original design work with about 500 words of text and three or four accompanying images—lines drawings, renderings, or notional sketches of design ideas, details, or problems—for our team to review and post here. Please direct all submissions or questions to melissa.wood@nullproboat.com.