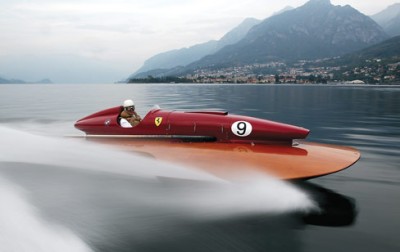 After powering Ferrari race cars to several records and top finishes in 1953, and following a fatal accident in the Mexican desert, the V12 engine was installed in a hydroplane raceboat in 1957, establishing on-the-water records during the Po River races the following year, 1958.

Sitting in the cockpit of his single-seat hydroplane, the driver activates the fuel pump and runs the engine a few seconds using the starter without ignition. He also gives the accelerator a few pumps to fill the carburetors. Now, he sets the magneto to position #3, and the two rows of six cylinders are boosted. His finger pushes the starter button again. This time it instantly triggers the inferno in the 12 cylinders. In a few jerking movements the tach­o­meter indicates 1,300 rpm and the driver keeps his foot on the accelerator, but already the engine decreases by 100 rpm. The water in the tank is heated slowly while the oil pressure drops gradually from 8 kg/cm2 to 4 kg/cm2 (114 psi to 57 psi). The sound is fantastic and if you listen closely, you can hear all the moving parts of the historic Ferrari V12 running like clockwork. For a fraction of a second, the driver contemplates Ascari and Villoresi, who would have won the 24 Hours of Le Mans in 1953 if it hadn’t been for that stupid clutch. 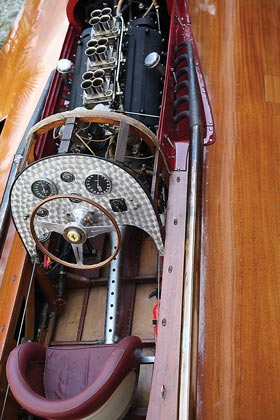 The V12 Ferrari is mounted in front of the driver, with the driveshaft to the propeller between the driver’s feet, and on the bottom right, the accelerator pedal.

Meanwhile, the water tem­p­erature has risen to 60°C (140°F). The pilot shuts down the engine so the heat is distributed and continues to rise naturally. Three minutes later he fires it up again and engages the propeller shaft by means of a specially designed gimbal, and keeps his foot on the clutch pedal. He must now increase the acceleration while slipping the clutch to drive the propeller without stalling. The red raceboat begins to trace its wake of white foam; the engine is hot. Now the driver can attempt takeoff. Lift speed is achieved at the point where most boats have already reached max speed. The party has just begun.

Unlike the other two Ferrari-powered classic raceboats still in existence, this is the only one equipped with a motor taken directly from a prestigious racecar. With its exceptional Ferrari-factory V12, this historic racer has rarely left its home on Lake Como, near Milan, Italy, but its amazing adventure started on the track of 24 Hours of Le Mans in 1953; it was the first World Sports­car Championship race, for which Enzo Ferrari (known as “Il Com­men­­datore”) had prepared three 340 MMs, one with a higher capacity 4,494-cc engine and a reinforced chassis. At Ferrari, the designation of the older models was based on the capacity of one cylinder. Therefore the 340 MM had a 4.1-liter engine, but the 0318 AM received a 375 engine directly derived from Aurelio Lampredi’s 1950 and 1951 V12 Formula 1 winning design. This particular engine was reported by renowned Ferrari historians as having been prepared for the Indy 500 in 1952 with special parts such as rods machined from a steel block rather than forged. 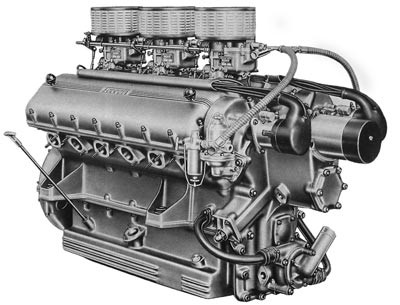 Entrusted to driving aces Alberto Ascari and Luigi Villoresi, the first 375 MM beat the lap record at Le Mans at 181.5 kmh (113 mph), dominating the race and leading for 17 hours before giving up after 19 hours. Its clutch failed after 229 laps of a total of 304.

A few months later, the 0318 AM, driven this time by Antonio Stagnoli and Giuseppe Scotuzzi in the Carrera Panamericana, in Mexico, was well ahead between Tuxtla and Oaxaca before leaving the road at almost 290 kmh (180 mph) after a tire burst. The car was severely damaged and the two men killed. Only the engine survived and was returned to Milan. It was there that a certain Guido Monzino, a wealthy explorer who’d climbed the highest mountains, bought it to mount in the 800 kg class raceboat, built in Milan by San Marco, holder of world speed records and countless victories. This hull, #069, built in 1957, was the perfect match for the 375 engine.

Monzino’s raceboat was of the so-called three-point type, with two wide sponsons at the front, ending with a narrow transom supporting the propeller and rudder mounts. Therefore, at full speed the hull was in contact with water on only three points. 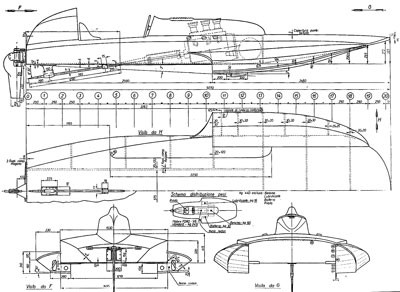 One of the rare drawings of the lines of a three-point hydroplane, typical of 1950s racers such as the San Marco Ferrari.

The servants loved to watch Monzino, impeccably dressed, climbing in the cockpit of the red San Marco, casting off, and speeding toward Como in the fantastic roar of the 12-cylinder engine. Within less than 15 minutes, he alighted at the yacht club, where his four-wheel Ferrari awaited to whisk him off to Milan. One could say that Monzino had a Ferrari in every port.

With the boat requiring restoration, he sold it in 1969 to Dody Jost, who owns the Nautilus hotel located on Lake Como. Over the next few years the hull was entrusted to Luccini, the well-known competition boatyard, and the engine to Diena & Silingardi Sport Auto workshop, a Ferrari specialist. The restoration required years of work before reaching the perfection of the original. Recently exhibited at the Museo Casa Enzo Ferrari, in Modena, the San Marco V12 fascinated not only the public but also the historians of the Ferrari factory, in Maranello. For years they paid little attention to the presence of the Commendatore engines on the water; however, in 2012 the Ferrari Classiche department, responsible for the authentication of the most outstanding Ferraris, surveyed the boat. After a detailed examination, its engine received official recognition, according it all its historical “matching numbers” originality.

The only racer with the Cavallino emblem powered by a historic Ferrari racing car engine was sold, in 1969, in Como, by Guido Monzino to Dody Jost, who still keeps it on the same body of water.

[Editor’s note: A longer version of this article appeared in Forza magazine No. 137, August 2014.]

From “Rovings,” Professional BoatBuilder No. 159
Compiled by Dan Spurr