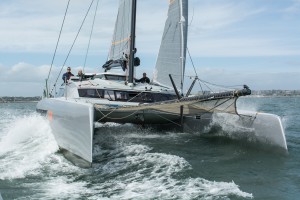 Economic cycles, as those of us in the business know all too well, are particularly tough on boatbuilders. Periodic recessions and fuel crises take a deadly toll. Many businesses fell during the recent Great Recession.

Over the last four-plus decades—from the Arab Oil Embargo of 1973, which caused once-prosperous powerboat builders to actually try their hand at building and marketing (gasp!) sailboats—industry leaders have taken several distinct tacks in their search for business plans that offer protection from the vagaries of the economy. One is to diversify beyond the marine sector. TPI, under the guidance of Everett Pearson, sought safety by utilizing its composites skills to build everything from telephone poles to people movers, wind turbine blades, and swim-in-place pools—diametrically opposed to the second tact, with the credo: Do one thing exceptionally well and stick to it. A good example is Precision Boat Works of Palmetto, Florida (subject of an upcoming article in PBB), in business nearly 40 years building small sailboats, with a few forays into larger boats or other industries. 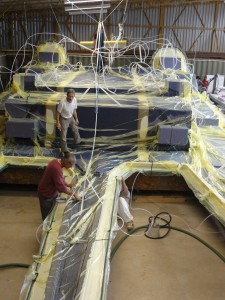 “The Dazcat 1495,” however, “has infused hulls, but we still hand-lay the deck, as there are lots of individual carbon aspects to the laminate, including uni-directionals, so we find it more controllable not to infuse this,” says Darren Newton, co-owner of Multimarine.

That got our attention, as did Multimarine owners Darren “Daz” Newton’s and Simon Baker’s interest in developing multihulls for the disabled.

Newton: “Our first disabled-accessible yacht was Paradox, three-time winner of the Round Britain and Ireland race, built for Alan Grace. The second was Impossible Dream, all-carbon 60’ [18.3m] cat built for Mike Browne and used by Geoff Holt, a quadriplegic sailor, to cross the Atlantic unassisted in sailing. This boat now resides with the Shake-A-Leg organization in Miami.

“We built Desiderata, a 50’ [15.2m] Powercat for Paul Solely, also in a chair. We have built two smaller 525 and 695 Powercats for wheelchair users as well. Our next project is a Dazcat 1495A for another disabled client, who is going to sail around the world; this is quite interesting, as it’s powered by fore sails only.” 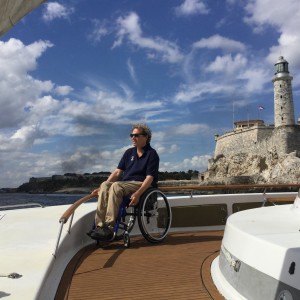 Impossible Dream (60’/18.3m) now belongs to Shake-A-Leg Miami, a Florida-based nonprofit watersports organization that encourages people of all abilities to get out on the water. Here, founder Harry Horgan surveys the Havana waterfront after finishing second in the multihull class of the Conch Republic Cup regatta, from Key West to Cuba.

Impossible Dream, a one-off wet-preg project built over a male mold, was exhibited at the 2008 enAble trade show in Coventry, U.K., where it was the only boat, among 120 other exhibitors, earning Multimarine distinction, respect, and future contracts. Now serving the Shake-A-Leg Miami watersports organization in Florida, she recently competed in the Conch Republic Cup regatta between Key West and Havana, Cuba.

After years of straddling operations between two sites, Multimarine recently consolidated operations in Millbrook, Cornwall. Its line of Dazcat catamarans has slowly expanded, with the most recent being the 49’ (14.9m) 1495 performance cruiser. The first, named Hissy Fit, was developed for participation in transatlantic and RORC race events to the West Indies, followed by family cruising. The 1495 hulls are infused and the deck hand- laid; materials include foam sandwich with multi-axial E-glass, Kevlar, and carbon fiber, with vinylester and polyester resins. The cockpit has gelcoat, while the hull and deck are spray-painted. The twin daggerboards are carbon. The second 1495, Apollo, was recently launched. 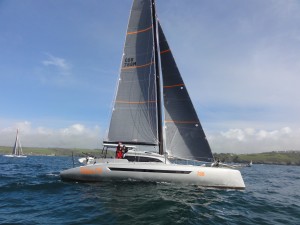 Of Hissy Fit, Newton writes, “It’s not just our composite techniques that make a light boat; it’s also down to design and clever systems that complement each other.” These include can bus electrical, lithium battery cells, and short wiring runs. The all-carbon rig reduces pitching, which increases speed and comfort, and the lack of roller reefing saves weight. All main components are centralized, also to enhance comfort, and there’s no forward beam.

The smaller Dazcat 995 (33’10”/10m) is offered as a “structural shell” for owner completion or “fully kitted,” ready for cruising and racing.

At 28 years and counting, Newton and company impress by working hard, staying creative, and keeping life in perspective. Writing on the company website, Newton says, “We are hatching a plan to do something very special to celebrate [the 30th anniversary] in two years’ time. This could include racing to the Caribbean as well as events here in the U.K., so let’s get together to see how many Dazcats fancy an adventure and a run to the sun.”