In Tasmania’s bucolic D’Entre-cas-teaux Channel region, on a hill overlooking Kettering Harbour, Andrew Denman’s shop is in a spacious shed on a parcel of land adjacent to the home he shares with his wife and two daughters. A small sign reads: “Traditional and modern timber vessel construction.” As I rounded the drive, Denman walked out to greet me. He shook my hand with a strong grip and led me inside, where over the course of an hour he talked about his work, the boats he’s built and refit, and the history of Tasmania’s boatbuilding, marine trades, and perhaps most interesting of all, its numerous and storied marine timber species, including Huon, or Macquarie, pine (Lagarostrobos franklinii). 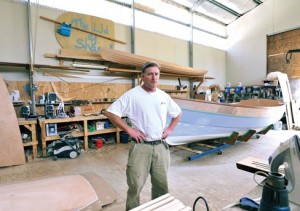 Andrew Denman left a career as an air traffic controller to pursue building and repairing wooden boats. Behind him is a BayCruiser 20 (6.17m), under construction in his shop overlooking Kettering Harbour, in Tasmania, Australia.

After graduating from high school Denman entered the Royal Australian Air Force, where he worked for eight years as an air traffic controller (ATC). From his stint in the military he transitioned to civilian air traffic control, a position he held for another eight years. To a lifelong boater with a solid understanding of vessel construction and systems, the world of wooden boat building beckoned. In 2000 he and his wife took a year off to live aboard their Arends sailboat, with their infant daughter. That just whetted his appetite for a life connected with boats. Recognizing that there would be no perfect time to make the change, he resigned from his ATC position and immediately enrolled in an 18-month program at the Wooden Boat Centre in Franklin, Tasmania. Upon completion in 2005, he started Denman Marine, a small custom boat building and repair shop in Kettering (about 20 miles/42 km south of Hobart). Like many small-business owners, he says his real learning began only after he started his own company.

All Denman’s new construction has been on vessels 30‘ (9.1m) and smaller. Among recent projects is a 23‘ (7.0m) electric launch, which relies on a 1,000-watt solar array located on its hardtop. At its 4-knot cruise speed it’s energy neutral. Asked about his favorite builds, he responded, “A Paul Gartside coastal rowing skiff, as well as building the spars for a newly launched international Eight-Meter [26.4‘].” His most memorable project is also his least favorite: rebuilding a sodden 36‘ (11m) Taiwanese motor cruiser. “It was so bad,” Denman says, “that if you pushed on the interior veneer, black water would ooze out and keep running for days. A horrible job.” Denman has also garnered projects from the entertainment industry, such as making small wooden boats for the film The Chronicles of Narnia: The Voyage of the Dawn Treader, as well as for a video promoting Australia’s FIFA World Cup bid. These can be viewed on Denman’s website, www.denmanmarine.com.au/boats-for-film-and-television. 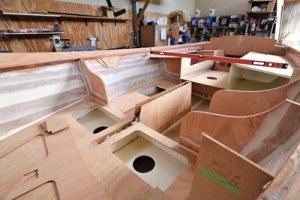 The BayCruiser 20 is a timber-composite water-ballasted ketch from Swallow Yachts in the U.K., for which Denman is the agent in Australia.

The timber industry in Tasmania, and the harvesting of old-growth hardwoods for boat building and repair, is a thread intricately woven through this region’s history, and it’s one that is, in the current era of environmental awareness, predictably controversial. Tasmania’s seemingly limitless supply of timber led to what would become a long tradition of boatbuilding, which in turn became the incubator for many other industries including whaling, sealing, and fishing (the docks in Hobart remain home to a substantial rock lobster fleet, whose traps are still made from local timber).

It’s a subject that piqued my curiosity, and, as it happens, Denman is deeply involved, as an advocate through the Tasmanian Special Timbers Alliance for sustainable use of these resources for boatbuilding, furniture making, and other Tasmanian trades. Over lunch he explained the primary endemic species he and others in the trade rely upon: celerytop pine (Phyllocladus asplenifolius), the aforementioned Huon pine, King Billy pine (Athrotaxis selaginoides), and Tasmanian blue gum (Eucalyptus globulus), all of which are slow-growth, with some taking hundreds of years to reach maturity. Some are so prized—particularly Huon pine, which is highly rot-resistant—and access to their remaining stands is so limited that enterprises have been established to reclaim them from riverbeds, flooded hydroelectric reservoirs, and coups (previously logged areas).

Denman has worked closely with the Austral-ian government to craft policies that ensure the resources are managed sustainably, so these timber species will theoretically be available for generations of craftspeople to come. He believes ample wood supplies remain in stands that can be harvested sustainably by his industry and others. Some believe that unless an agreement can be reached between trade and conservation proponents, the current generation of Tasmania’s wooden boat builders and furniture makers may be the last. “From 2027 [the year further harvesting restrictions kick in] there is essentially no wooden boat industry, and it is death by starvation until then,” Denman says.