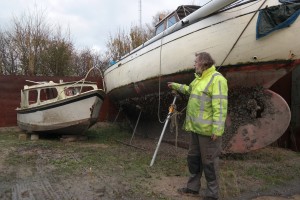 Bram van der Pijll once restored boats; now he dismantles them. His solution for getting boat owners to pay for disposal—which they are often reluctant or unable to do—is to offset the disposal cost as much as possible by selling reusable parts.

There are no mandatory regulations for disposing of recreational boats in Europe. But there probably will be in the next couple years, according to an ICOMIA (International Council of Marine Industry Associations) representative who spoke at the Future of Yacht Recycling conference held in Amsterdam last fall (2015). That prospect and a lack of landfill space in Europe have led to the formation of boat-dismantling schemes, such as a national boat disposal network in France. There, boat owners can drop boats off at one of the 52 recycling centers that the marine industry has set up along the coasts.

Programs like that offer a solution for owners to properly dispose of their boats. However, they don’t address how to get them to do it. For a boat to be dismantled, somebody has to pay to transport it to a dismantling center, take it apart, grind the pieces down, and in most cases to dispose of the FRP that makes up so many boat hulls.

As discussed at the conference, boat owners who have already sunk a lot of money into their old boats are reluctant to also to pay to dispose of them. That’s a problem when you consider that the number of old, unwanted boats is only growing. ICOMIA estimates that of the 23 million recreational boats worldwide, 2.3 million of them are out regular use and that number will grow by about 400,000 per year. 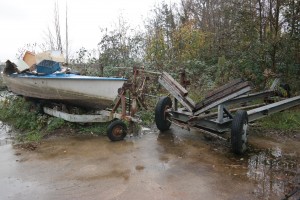 There are an estimated 2.3 million boats worldwide that are no longer in use.

That’s a lot of dead boats. To properly dispose of them it would be much better to find a way to make money from them. Imagine if a boat owner could actually receive even a small payment for bringing an old boat in to be recycled? Carla Demaria, president of Monte Carlo Yachts and the Italian Marine Industry Association, emphasized this in her keynote speech at the conference, stating, “The whole problem will be solved when we are able to add value to the process.”

Unfortunately, we’re not there yet. Though ideas were shared about doing just that, they fell short of being actual solutions. The idea of designing for easier disassembly, for example, doesn’t address the growing fleet of old, unwanted boats, and requires building with more expensive materials that may be a hard sell. Though fiberglass recycling is possible, a method that was discussed at the conference would only apply to clean, virgin fiberglass; it’s also hard to justify the expense of fiberglass recycling when new fiberglass is still so cheap.

Sounds frustrating, yes? At the conference, I met Bram van der Pijll, owner of the boat-dismantling yard Bootdump in nearby Enkhuizen. Despite these obstacles, van der Pijll is making a living off recycling old boats. There is no magic solution, just a lot of work and coming up up with small solutions to make as much money as possible from old boats. While other boat recycling centers mechanically grind the boats into small pieces that can then be sorted by their materials, boats at Bootdump are taken apart by hand. Every boat that comes in is a balance sheet, and he must calculate what he can make from materials and any salvageable parts, which he sells from a store on the same site.

He faces many challenges. Even though he tries to offset the cost of disposal as much as possible, most times boat owners have to pay to bring them to Bootdump, unless the boat has something very valuable—like a working engine. And while van der Pijll’s background as a boat restorer helps him know how to properly transport boats to his site and tell parts can be reused, he must deal with environmental and labor standards for waste facilities, which are understandably stricter than those for boatyards. Tearing apart a boat is not without risk. 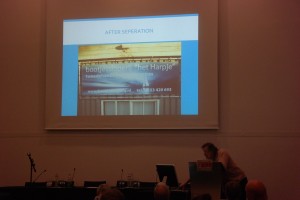 Van der Pijll talks about his boat dismantling business Bootdump at the Future of Yacht Recycling Conference, held this past November in Amsterdam.

But one thing I found notable about van der Pijll was his lack of frustration. He too would like to find a way to recycle FRP instead of sending it to an incinerator, where it goes now, and he will continue to go to recycling conferences and the like to support those efforts. “I never call it a problem because the solution is there,” he said. “Only we need to work on it together.”

Van der Pijll is not the only one to see opportunity in the problem of dead boats. I plan to follow this article with a closer look at where the composite recycling technology stands now, and where it could be going. One day boat manufacturers may be affected by cradle-to-grave mandates, such as those instituted in Germany that are currently affecting changes there in car manufacturing. Could something like that actually be an opportunity for boatbuilders to find a creative and profitable solution?

The Bootdump method may not be the only solution, but at least is a solution. Read the story “Boat Breaker,” in the April/May issue of Professional BoatBuilder (No. 160).