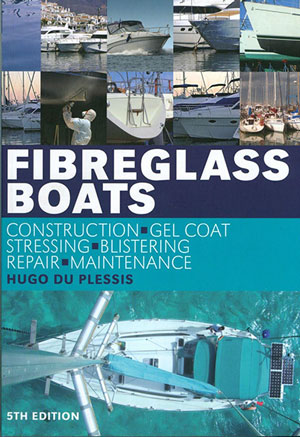 Previously on Proboat.com we posted an article of mine about the 5th edition of The Gougeon Brothers on Boat Construction—widely considered the definitive manual on wood-epoxy composite construction. Among other things, that article looked at the book’s place within the context of boatbuilding-related technical publishing in this country during the course of the manual’s five iterations, a span ranging from the inaugural edition in 1979 to the 5th in 2005.

Hugo du Plessis’s Fibreglass Boats, an authoritative multi-edition reference manual on marine fiberglass construction, has a somewhat similar backstory. But before going any further here, let’s clarify the spelling variation in the preceding sentence. “In Britain,” explains du Plessis ahead of the table of contents, “fibreglass has been adopted as the popular generic term for glass reinforced plastics….”

Also right up front, du Plessis presents his credentials, to assure readers unfamiliar with him that he is indeed an expert on the subject. His “lifetime” involvement with fiberglass boats began in Britain in the 1950s, where he did tooling and fabrication (“moulding”) at a time when fiberglass construction was generally regarded as a fringe technology. Then he started perhaps the first boatyard specializing in FRP “yachts.” Next, he established a small charter fleet, before becoming a liveaboard for two decades “among other blue water and ocean cruisers.” That led to a lengthy career, in Atlantic and Caribbean waters, as an independent marine surveyor and consultant, a professional practice that provided him with much of the best information in the book—namely, everything that can go wrong, and has, with a badly built or poorly maintained fiberglass boat. Du Plessis also served on the committee that eventually drafted Europe’s Recreational Craft Directive.

It was Adlard Coles, a London book publisher with a nautical bent, who in 1959 persuaded du Plessis to write about the then-new boatbuilding medium of fiberglass. Coles issued the first edition of du Plessis’s book in 1964, by which time fiberglass was fast becoming a popular material in the boating market. So much so that within two years Fibreglass Boats went into a second printing. To keep pace with the industry’s changing technology, du Plessis prepared a second edition that Coles released in 1973 and reprinted in ’74. The author revised it in ’76; Coles reprinted it in ’78 and ’79. This pattern continued to the present: third edition in 1996, revised in ’02; fourth edition in ’06; and fifth edition in 2010. Within the universe of marine publishing, a sequence such as that—multiple printings, revisions, editions—is truly rare; it speaks of a book with strong, sustained appeal.

Either a late second, or a fresh third, edition appeared at Professional BoatBuilder magazine’s editorial offices in the 1990s. Responding to PBB articles, du Plessis wrote a series of Letters to the Editor, published in the magazine, on a variety of technical topics, including: moisture meters; limited hull access due to liners in FRP production boats (accompanied by an excerpt from his book); metric versus Imperial measurement units; and the world’s earliest large production fiberglass motoryachts (the 49.5’/15m Deborine class built by Halmatic, in England, in 1957, were earlier and larger than Hatteras Yachts’ first-generation FRP convertible, a 41-footer [12.5m] built in 1960). 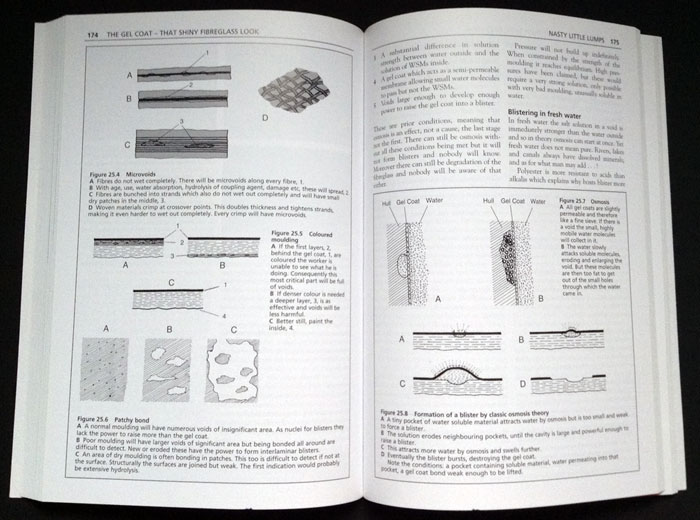 Here, we see a pair of sample pages from the section on blisters—“that most worrying problem for every owner of a fiberglass boat,” writes author du Plessis. According to him, the chapters on blistering “are the most comprehensive in any book.” Note the clarity of his drawings. The 5th edition, a paperback, measures 6-3/4” x 9-5/8” (171.5mm x 244.5mm).

For the 282-page 2010 edition, du Plessis updated the text, drew several new diagrams, and installed two new color-photo galleries of eight pages each. (Every photo in the 4th is black-and-white; details and defects are easier to discern in color.)

Du Plessis’s 5th and 4th editions follow the same format. He divided the book into seven major sections identified by letter, and subdivided the sections into numbered chapters, 44 in all. Giving a good idea of what’s covered, the section descriptions are condensed in the book’s subtitle: “construction / gel coat / stressing / blistering / repair / maintenance.” The book closes with a useful index, although a handy two-page appendix at the back of the 4th, containing “technical equivalents,” is gone, presumably because many people now turn to dedicated websites on the Internet for such numbers.

In his introduction to the 5th, du Plessis states, “Like the previous edition, this is a technical book for non-technical readers, written in language the average boat owner or boatyard worker can understand…. More technical material is enclosed in boxes for interest, but it is not necessary for understanding the basic principles….” The main text, irrespective of topic, is as direct and straightforward as that introductory passage. Du Plessis augments his text with a plentiful supply of simple pen-and-ink drawings; the bulk of the photos, illustrating this or that point, were shot by him, often in the field. Note that the book’s primary emphasis is on FRP boats built by conventional production methods; comparatively exotic methods such as prepreg, wet preg, and resin infusion are described in brief but not discussed in depth.

Fibreglass Boats is neither an engineering text nor a step-by-step how-to manual on construction or repair. There are other titles to satisfy those requirements—but not many. While fiberglass has long since displaced wood as a favored production boatbuilding medium, the technical library of boatbuilding remains heavily weighted toward wood, likely because wood remains the preferred material for most amateur projects.

Finally, a number of chapters in du Plessis’s 5th end with references in the form of bibliographic citations. And a significant number of those refer to specific articles (plus one reprint, on osmotic blisters) that originally ran in Professional BoatBuilder magazine. Indeed, du Plessis acknowledges “the American journal” as “an invaluable source.” We’re pleased PBB contributed to the quality of his enduring book.