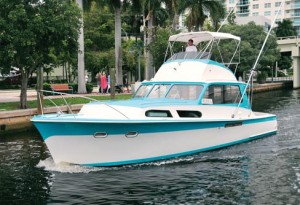 A few years ago Hatteras Yachts refurbished hull #1 of its first model, a 40.7′ (12.4m) “convertible,” the term coined by owner Willis Slane to describe a sportfisherman also suited for family boating. Professional BoatBuilder’s technical editor recently saw her cruising down the Intracoastal Waterway.

It’s one of the better tales in the history of early fiberglass boats, how in the late 1950s argyle sock maker Willis Slane, an avid sport fisherman, pounded on the bar at the Hatteras Marlin Club in High Point, North Carolina, angry that local skippers wouldn’t risk their wood boats in stormy weather. He threw down a check for $5,000, and roared, “Let’s build some boats that will go out!”

One of his group, Sleepy Carter of J.P. Stevens Textile Co., said his company had begun weaving glass fibers and suggested their use in the new boat. A friend of Slane had recently had a boat designed by the young designer Jack Hargrave, whom Slane retained. Doing his homework, Slane visited Crystaliner in Florida, where he met Don Mucklow, whom he brought to High Point as loftsman and chief builder. Mucklow then became vice president and general manager of the newly formed company (for more on Mucklow and Crystaliner, see Professional BoatBuilder No. 105, page 9). The involvement of old-time Florida builder Howard Abbey in the project was recounted in “Abbey and Brownie,” PBB No. 104. 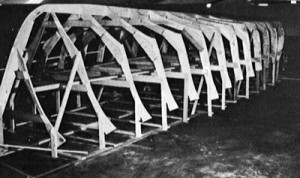 Knit Wits was tooled in 1959–60 by Don Mucklow and Howard Abbey in High Point, North Carolina. Here, the frames for the wood plug are set up.

A year later, the result was the Hatteras 41 (12.5m) Convertible Yacht Fisherman. Only four were planned, but Slane took it into production, an impressive achievement. It was the largest U.S.-built recreational powerboat at that time; only the U.S. Navy had built larger fiberglass motor vessels. At least one in Europe, the 45‘ (13.7m) Perpetua, built in the U.K. by Halmatic in 1954, was larger. Named Knit Wits, that first Hatteras was tooled with a strip-planked plug over which was laid fiberglass cloth and black-pigmented resin that revealed high spots and depressions to facilitate fairing. A female mold was taken from the plug. The hull had fiberglass stringers, marine plywood bulkheads tabbed to the hull, and plywood decks coated with polyester resin. 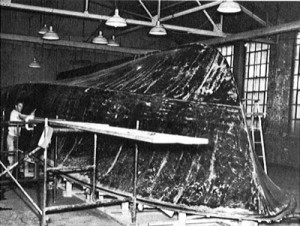 The fiberglass skin over the plug shows the black-pigmented resin, which made high spots and depressions stand out during fairing.

In a boat test, in which Knit Wits was contrasted with a new Hatteras GT 60 (18.3m), Power & Motoryacht editor Bill Pike said the old lady has a tendency to roll, was hammered in head seas, and felt “clumsy and slow” compared to the new, larger Hatteras. She made 20 knots at 2,400 rpm. We shouldn’t be surprised though; a lot has changed in 56 years. The company exhibited the refit Knit Wits at the Fort Lauderdale Boat Show and maintains her as a flagship, a testimony to its proud origins.

The photos you see on page 8 were taken by PBB technical editor Steve D’Antonio, who came upon her ambling down the Intracoastal Waterway last fall.