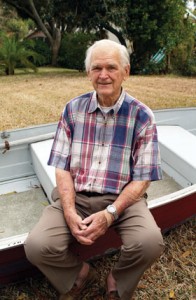 Walt Walters, who cut his teeth in the boatbuilding business at Bertram Yachts just as it was formed in the early 1960s, became an important designer of high-performance powerboats. He’s shown here outside his Florida winter home in 2011.

At times it seems like Rovings risks becoming an obit column rather than a file of current industry news, but I make no apologies for recognizing the passing of certain seminal personages.

I’m thinking today of Walt Walters, who died last December at the age of 89. He was profiled in PBB not once but twice, first in No. 3, by Pete Smyth, one-time editor of Motorboat and Motor Boat & Sailing magazines, and more recently in No. 132, by me. Smyth interviewed him toward the end of Walters’s long and illustrious career as a builder and designer; I visited him 21 years later at his winter retirement home in Florida.

Anyone interested in early fiberglass powerboat design and construction would do well to read both articles cited above. Here’s why: Born in Rochester, Minnesota, Waltman M. Walters studied aeronautical engineering at Rensselaer Polytechnic Institute, switched to mechanical engineering, and then got married and moved to Florida. His first job was as draftsman at Scottie Craft just as the company was shifting from wood to fiberglass construction. Next was Squall King, and then a partnership with Carl Moesly (see PBB Nos. 91 and 144) building the American Marc line for Arthur Vining Davis, head of Alcoa. Smyth relates: “Unfortunately, Moesly and Walters did their laminating in their patron’s greenhouse. The fumes from the polyester resin promptly killed every one of Davis’s prize orchids.”

Following Dick Bertram’s historic victory in the 1960 Miami–Nassau Race, in a Ray Hunt–designed deep-V named Moppie, Bertram formed Bertram Yachts and hired Walters as production engineer for the Bertram 31 (9.4m). Not long after, Walters and Jim Wynne teamed to design and race offshore powerboats. Their first, the 16‘ (4.9m) Wyn Mill, was sufficiently successful to draw the attention of Don Aronow, who commissioned Walters and Wynne to design the Formula 233, which Smyth says “was in continuous production for 19 years, until 1983, and is one of the most-copied hulls ever built.”

In the following years Walters designed for Donzi, Chris-Craft, Luhrs, Starcraft, Fino, Monza, Botved, Kiekhaefer, Aquasport (the landmark 22/6.7m popularized the center-console open-fisherman type), and many more. He even designed a few sailboats for Bill Soverel.

My profile ended with my asking if he regretted never finishing his college degree. “If I’d gotten a degree,” he answered, “I’d have had to work for a corporation. Not knowing what I was doing was a privilege—learning how to do things my own way.”