Now retired (well, mostly retired), Ken Raybould has had an impressive career in the marine industry that can be said to have begun with raceboats. In the realm of power, he helped develop the first Ray Hunt deep-V offshore designs to compete in Europe. In sail, Raybould did the structural engineering for yachts that won world championships in the three-quarter-, one-, and two-ton classes. Power and sail alike, those vessels featured innovative FRP construction and served as significant test beds, over a period ranging from 1958 through the 1970s. By 1977 Raybould felt confident enough of his experience and expertise in applied marine composites to start a Southampton, U.K.–based consultancy called MarTech, for which he was principal. 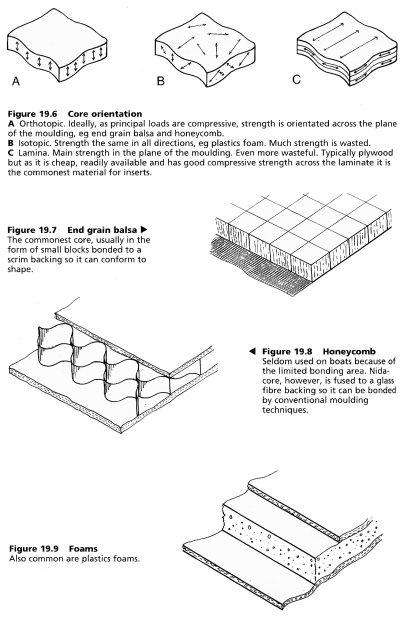 Illustration on cored construction drawn by Hugo du Plessis for his best-selling Fibreglass Boats, a book first published in 1964 by Adlard Coles (London) and still in print. Du Plessis has continually updated the text to keep pace with FRP technology. A review of the latest edition appears here on this website.

By 1992, when a young Professional BoatBuilder magazine launched its trade show and seminar program, known by the acronym IBEX, Raybould could count among his clients American conglomerate DuPont, maker of Kevlar reinforcements and Nomex honeycomb cores—often described as “exotic” materials. During the mid-to-late ’90s, PBB regularly enlisted Raybould to be a panelist or moderator in seminars addressing composite problems and solutions. For example, at IBEX 1996, he moderated a seminar titled “Core Wars”; Raybould’s mild manner kept it from becoming a battle royal among technical reps on the panel, whose companies were fighting for market share. (One brand missing at the time, however, was Corecell, a SAN foam product under development then.)

Raybould’s podium notes for that session are still quite relevant, considering how many boat builders—today, two decades later—remain skeptical of or apprehensive about cored construction.

Although there were reps on the “Core Wars” panel whose products were neither PVC nor end-grain balsa, Raybould, to get the session rolling, focused on those two types, since they dominated the marine market in the ’90s. As I recall (IBEX sessions are not recorded), he didn’t get to pose all the questions—marked by bullet points, below—to that IBEX ’96 panel. But those are questions asked by production builders who still need to be convinced of the advantages and efficacy of cored composites installed correctly.

[Raybould’s remaining questions for balsa-core suppliers are basically identical to those above for PVC cores—except for the following on resin infusion. I’ll note that Raybould was the first person to describe the SCRIMP process, in print, to a trade audience.]

Question regarding peel or zipper effect

[Raybould has long believed that too few builders take into account what happens when hydraulic action compromises some portion of the hull bottom, at speed, via a damaged area in the outer skin near or below the waterline. Accordingly, he’d prepared the following lengthy pet question for the entire panel regarding general design criteria for both balsa and PVC cores.]

[Raybould-as-moderator planned to close the 90-minute seminar with this statement: “For both technical and economic reasons, we need to be more aware of the requirement to implement not only refined construction methods, but also quality control-and-assurance procedures devised to eliminate misunderstandings on how FRP materials might best be used. This does not mean more control; rather, it implies a different approach.” We’ll present precisely that—Raybould’s own approach to cored construction—in Part 2.]