In recent issues of PBB, Nigel Calder pointed out that statutory changes in fuel and emissions standards have caused unfortunate trade-offs for marine diesel engines. For example, where’s the environmental gain when technology that lowers emissions also decreases efficiency? And how do you make up for the loss of lubricity and storage life of low-sulfur blends? (See “Taking the Measure of Emissions,” PBB 157; “Diesel Fuel in Flux,” PBB No. 158; and “Hitting the Ethanol Blend Wall,” PBB No. 160.)

He’s not the only one to have noticed the marine industry’s challenges with fuel. In 2013, Maine Maritime Academy’s Marine Engine Testing and Emissions Laboratory (METEL), in Bucksport, Maine, was set up with a $1.4 million U.S. Department of Transportation grant to measure the success of new fuel-related products that attempt to solve some of these problems for marine engines.

“We’ve been doing testing for alternative fuels, standard fuels, and glycerin blends, additives, new engine ideas as well as just trying to establish what emissions are in a real-world on-the-water scenario,” said Tom Lokocz Adams, lead research engineer at the lab, which provides independent third-party verification of new fuel ideas through its fuel- and engine-testing facility, and on Quickwater, a 41‘ (12.5m) former Coast Guard vessel equipped for onboard testing. (METEL is also setting up a medium-speed engine for heavy fuel testing at the academy’s Castine campus.) 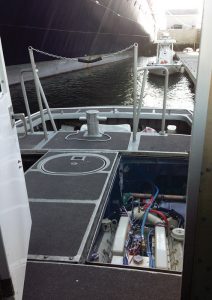 “We essentially can do some testing in the lab and say, ‘Does this fuel do what they say it’s going to do?’ And if it does, we’ll bring that same fuel out into the real world onto a vessel, set up the emissions equipment, and say, ‘In the real world does it do the same thing?’” said Lokocz Adams. “Sometimes, just because it works in the lab doesn’t necessarily mean it’s runnable and meets the same expectations on the water.”

In the Bucksport lab, the emissions instruments are connected to a small Caterpillar marine diesel. From the engine a hose runs to a television-size black-and-silver box. The machine, a Fourier transform infrared spectrometer, collects detailed information about the nitrogen and sulfur oxides produced during different engine cycle stages, in real time.

“We have a gas-handling system that basically pumps the exhaust through these lines into this instrument, and then it looks at the infrared spectrum of the exhaust gases, and from the various absorption peaks and troughs in that infrared spectrum you can determine what species exist in that exhaust and at what concentrations,” explained Brendyn Sarnacki, a Ph.D. mechanical engineer with a focus on combustion. “Depending on the molecule, they absorb light in different regions of that infrared spectrum, allowing unique identification.”

Another hose runs to a box behind the spectrometer that measures the engine’s total particulate exhaust. While clouds of soot billowing from an exhaust pipe are one of the most visible signs of pollution, particulate matter is difficult to measure. “Soot is really the complicated one. There’s not a lot out there that does everything that’s really necessary and easy in real time to characterize soot emissions,” said Sarnacki. He says the lab will be upgrading its capacity to measure particulate-size distribution.

Sarnacki wants to improve emissions testing even further by developing a cheap instrument that can be attached to a boat or automobile to measure soot. It’s a project the lab has been working on since before the Volkswagen emissions-cheating scandal brought the issue to the greater public’s attention. “If you can develop an instrument [such as a small sensor] that’s cost-effective enough to be placed on a car for like $100, then you really have something,” he said. “It’s pretty hard to beat it when it’s sitting there all the time monitoring emissions.”

Emissions aren’t the only important factor in fuel testing. New batches of fuel, blends, and additives—any change in fuel character-istics at all, said Lokocz Adams—are run though a series of tests to see how they’d fare in a marine environment. A machine called the LUMiSizer, for instance, is a sophisticated centrifuge that can age the fuel weeks, months, or years, to demonstrate what will happen to particle size and distribution in the long run.

METEL has also been approached by owners of large yachts to troubleshoot performance issues. “In one particular case, they repowered a vessel with larger engines that were significantly lighter and more efficient, yet when they finished the repower, they went slower and burned more fuel,” said Lokocz Adams. “They approached us and said, ‘Help! What’s going on?’ Measuring efficiency, measuring rpm, shaft, torque, fuel burn, that’s all part of the troubleshooting that we do on a daily basis.”