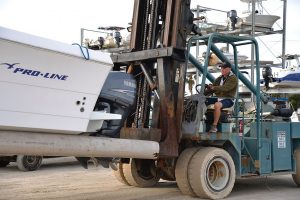 When I decided to buy a boat in Newport, Rhode Island, and truck it to the West Coast of Florida as a winter getaway, choosing a storage yard was a crapshoot, with less chance for success than comic book character Uncle Scrooge spinning a globe in front of Donald Duck and guaranteeing he could make money wherever his finger landed.

We had several requirements: the yard had to be within easy reach of a major airport (Tampa, Sarasota, or Fort Myers), charge reasonable rates, and allow owners to do at least some of their own maintenance. Cut’s Edge Harbor Marina in Palmetto, on a narrow spit of land between Terra Ceia Bay and the Manatee River, fit the bill. Of course I had questions. E-mails and eventually a phone call settled the deal. Foremost was whether they could restep the mast and get the Pearson 365 sailboat rigged. As it turned out, the yard manager, Tim McCann, was, among other talents, a rigger. Certificates from the Chesapeake Marine Training Institute hang on his office wall. But we had yet to get acquainted.

I flew to Tampa (home of this year’s IBEX) to spend a few days cleaning off the road grime, setting up the dodger and bimini frames, and sorting through the extensive gear left aboard by the seller. I told McCann my plan to arrive over the weekend; he said he’d have a ladder at the boat for my use, and he did. Check one for the yard: they did what they said they would. 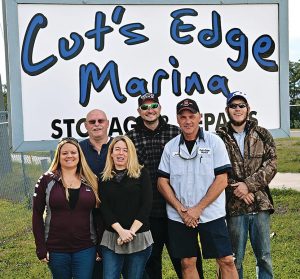 The crew at Cut’s Edge Harbor Marina provides a full range of services, either individually or by managing subcontractors.

During my next visit I sanded and painted the bottom (with paint donated by my successor at Practical Sailor magazine, Darrell Nicholson, for a test of antifouling coatings). Being able to do the work myself not only saved money, but I actually like working in the yard. You make friends. Several fellas came by remarking about our boat: “What kind of boat is that? Oh, I had a friend who owned one of those.” “You going somewhere? I’m headed for Cuba as soon as I get new sails.”

There is not a lot of water in Terra Ceia Bay, and the boat had to be launched before McCann could get the keel-stepped mast stepped. When no one was looking, an injured pelican suddenly landed at the helm, and work stopped while office assistant Raven Lukens called the rescue league. I was getting to know the crew, including business manager Kim Floyd and the yard hands. The yard owner died a few years ago and his widow is no longer active in the business. McCann, originally from Deltaville, Virginia, took over yard operations two years ago, after a stint at Marlow Marine and Florida Yacht Charters in Miami as service manager. “This used to be the Redneck Riviera,” McCann says of his current locale, “but we’re getting things better organized and operations more efficient.”

The core of Cut’s Edge’s business is storing and launching powerboats, with 75 in racks, 25 dry on land, and around 80 on trailers that owners self-launch at a private ramp on the 12-acre property. And there is the usual assortment of boats new, old, and derelict tucked away here and there, like the 53‘ (16.2m) houseboat that’s here to have its aluminum pontoons replaced.

A full-time mechanic handles repairs and repowers; Chris Reilly just returned from a trade school program at the AMTECH National Marine Service Expo Training Convention in Daytona, Florida. Jeff Nunn and Wally McDonald launch and retrieve powerboats with the 12-ton forklift. A 40-ton Travelift handles the bigger boats. Other crew perform general maintenance. Staff totals eight at present, including the office. Bottoms are done in-house. Subcontractors are brought in for other painting, glasswork, and welding. Subs bill Cut’s Edge, which bills the customer.

McCann says they do a lot of lower units, general service on outboards, and have a couple of repowers coming up.

And since his arrival, seeing how cramped the offices were, he’s organized the team to build new offices for themselves. A new sign out front reflects the team’s growing pride.

Working on your boat here is comfortable. Homey. The crew competent. It feels like the sort of place where every day thousands of American boat owners work on their boats across this great land, the sort of place that makes you glad to own a boat … because the surroundings are pleasant, because you know you’re not alone in the game.