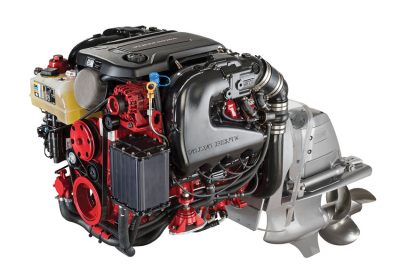 Courtesy Volvo Penta of the Americas

It is a rich history indeed. While a number of inventors worked on the sterndrive concept, Jim Wynne got most of the credit, and a lucrative contract with Volvo Penta. Here’s how it happened, as related in my book Heart of Glass:

“I started developing a prototype,” Wynne said, “just a crude working model using old outboard parts, in my parents’ garage in the spring of 1958, and applied for some patents. I purchased an engine that I had seen at a Volvo car dealership and that Volvo Penta was marinizing—a little 1.6-liter, 80-hp unit that seemed to me just the right size. I ordered it without the reverse gear because I wanted to bolt it directly onto the sterndrive.”

Thunderbird Boats loaned Wynne a 20‘ (6.1m) hull, which ran 30 mph with its new power plant. Wynne’s filing for patents included a double universal joint in the horizontal shaft, beating out by two weeks a Seattle man who presumably had arrived at a similar concept. A Volvo sales rep got wind of Wynne’s project, and before long Wynne was invited to Sweden by Volvo Penta’s then president Harald Wiklund.

From Heart of Glass: “The meeting concluded with an agreement that Volvo Penta would manufacture sterndrive units under license from Wynne. Wynne returned to New York driving a 22-foot [6.7m] Coronet, powered by twin outboards and designed and copiloted by Ole Botved, a racer he’d met at an earlier Miami–Nassau Race. The stunt required driving in the wake of a 17-knot freighter, lasted 12 days, and was not without mishap. The first production Volvo Aquamatic sterndrive units were exhibited at the 1959 New York Boat Show. To everyone’s amazement, Volvo was overwhelmed with orders (anywhere from 1,500 to 4,000, according to different recollections).”

Running a Volvo sterndrive, Wynne took first in class and fourth overall in the 1959 Miami–Nassau Race, and in 1960 finished second to Dick Bertram’s Moppie.

Volvo Penta recently introduced its next generation of V8s, based on General Motors’ Gen V platform featuring direct fuel injection, a lightweight all-aluminum block, wideband oxygen sensors, variable valve timing, and standardized parts and service points across the product line. The engines also incorporate Volvo’s rpm-based speed control, “which automatically maintains speed when the boat is in a tight turn.” They are available in 280 hp, 300 hp, and 350 hp (210 kW, 225 kW, and 263 kW).

The Swinger Hinge Can Help Save Money

Trailer tongues often extend well beyond the bow of a trailered boat, and sometimes that extra length causes problems when getting the boat undercover or shoehorned into a tight storage… Read more »