Computer rendering of the Calcutta 480. Power will be twin Cummins diesels with surface drives.

People get into the boatbuilding business in many ways: following in their fathers’ footsteps, pursuing any job they could get, serendipity, or as seems so often the case, they became obsessed. As Charley Morgan once said as a teen: “I went queer for boats.”

Steve Ellis, 56, grew up on the water in Florida. His first boat was an 8‘ (2.4m) Cypress Garden Sliver, “the ones used in the clown act,” he says. During college he worked in an auto body shop, and even after embarking on a career in securities investment, he liked working with his hands, noting at least one house restoration he undertook. So perhaps it’s no surprise that he left his job in 1996, bought land and a 10,000-sq-ft (929m2) building at the end of a dirt road in the countryside of Palmetto in 1997, founded Calcutta Marine that same year, and in 1998 produced his first boat: a versatile 26‘ (7.9m) fiberglass power catamaran. 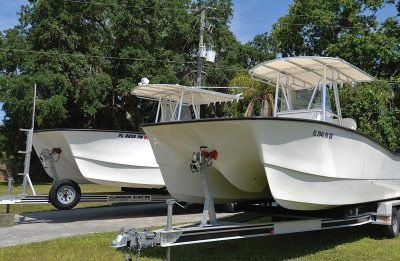 The Glenn Henderson–designed 26‘ (7.9m) Calcutta power cat has been the yard’s bread and butter since its inception in 1998.

Designed by Glenn Henderson, it’s a great Florida boat, says Ellis, because it can “float the shallows and also go offshore for marlin fishing.” It’ll run 40 mph (64 kmh) with a pair of 90-hp (68-kW) outboards, though Ellis says many customers insist on bigger engines because they can’t believe such speeds from those motors. The low-drag cat hullform and lightweight construction make it possible. While the topsides are single skin, the bow, stern around the motors, and bulkheads are cored. A liner “becomes the inside skin,” Ellis explains. “The ends of the internal storage boxes are cored and create the bulkheads. The liner and hull sides are troweled with liner putty and bonded together. The deck is glassed to the hull side to reduce the unsupported panel spans. The boxes become structure; we didn’t want to duplicate structure.” All-up weight with motors is around 6,000 lbs (2,718 kg). 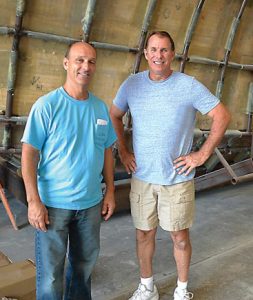 In 2005 Ellis bought the molds for the Benchmark 36 (11m), a John Kiley–designed catamaran that his company modified based on experience with the 26: widening the beam from 16‘ to 17‘ (4.9m–5.2m), widening the tunnel and chines, and adding a V pad on the hull bottoms. (For a description of the Benchmark 36, see “Kiley’s Cats,” Professional BoatBuilder No. 47, page 16.) Ellis and his shop manager, Robert Helmick, 51, built half a dozen or so of the 36s, and a custom 39 (11.9m) for a Saudi client, before one of the 36 owners commissioned a much larger version, an all-carbon/vinylester 48‘ (14.6m) cat, which had just finished being infused during my visit to the shop. Ellis says the setup took a few days to gel and skin, three days to load, and 16 minutes to infuse. Expected displacement is 23,000 lbs (10,419 kg), and power will be twin Cummins diesels.

After three days of preparation, guided by Calcutta’s representative from Composites One, the hull was infused in just 16 minutes.

Now managing a crew of 12, Ellis and Helmick say the project has gone flawlessly so far, thanks in large part to Chris Noonan of Composites One, who specified vinylester resin over epoxy and “peel ply everywhere” to avoid any secondary bonding issues, as well as a cored laminate with grooved Gurit foam for good resin flow. They also cite assistance from Jim Ryan of Locus Design, in Annapolis, Maryland, who performed all the CAD work.

The 48‘ asymmetrical hulls reflect Kiley’s thinking on cat hullforms, with outside deadrise of 45° and inside deadrise of 25°. Beyond performance and handling characteristics, asymmetry facilitates mounting large diesel engines.