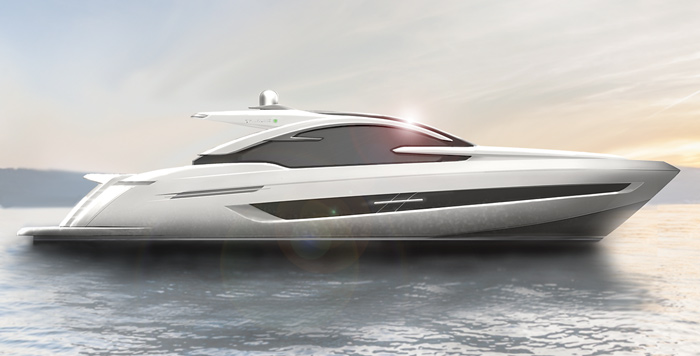 Designed by Alberto Mancini, with naval architecture by Vripack, the Fairline Targa 62 GTO (18.9m) will be the first model under the company’s new owners.

The new owners of British boatbuilder Fairline invested heavily in new design and architecture by enlisting the services of Italian designer (stylist) Alberto Mancini, and the engineering/naval architecture of the large Dutch firm Vripack.

Fairline was founded in 1963 by Jack Newington, who converted gravel pits on the River Nene into the Oundle Marina. Its first build was a 19‘ (5.8m) powerboat. Over the years, its offerings evolved to high-speed motoryachts. Newington’s son Sam began managing the business in 1971, expanding dealer networks to other parts of the world, including the U.S. After his retirement, the business, which over the years accounted for 13,000 yachts, was bought and sold a number of times, most recently in 2015 by two U.K.-based Russian businessmen, who reportedly paid £4 million to get the company out of “administration” (bankruptcy).

Vripack developed the all-important bottoms of the new Fairlines, as well as the structural engineering. Managing partner Marnix Hoekstra says, “Fairline is truly a boater’s boat. It is our task to bring back that Fairline feel to the ride of their boats. This means a careful balance of low dynamic trim and high maneuverability while increasing the comfort of the ride and fuel efficiency.”

The first model designed by Mancini is the Targa 62 GTO (18.9m). Several accommodation choices will be available when it’s launched in 2017. All will feature a large, glazed, sliding sunroof, and powered patio doors that retract through the cockpit floor. The new owners retain the two dis­tinct model lines: Targa express cruisers and Squadron motoryachts.