Editor’s Note: While its usefulness has been well demonstrated in boat repair, non-destructive examination (NDE) has potential for boat builders too. We look at those possibilities in the article “Builders’ Takes on NDE” (Professional BoatBuilder No. 163), which explores the different types of NDE techniques, how boatbuilders work with NDE experts, and what happens after testing reveals a defect. 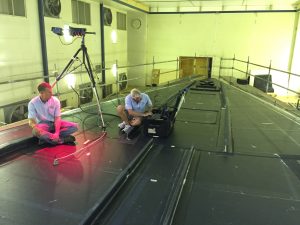 As  explained in the story “Builders’ Takes on NDE” (PBB No. 163), non-destructive testing can range from a simple tap test to advanced techniques such as ultrasound and laser shearography (above).

When flaws are found it’s also important to categorize them correctly. Roby Scalvini, a specialist in advanced non-destructive testing and a contributing editor to the magazine, explains:

In aerospace composite construction, flaws found by NDE are normally categorized as follows:

Indication: an irregularity in the inspected subject detected by single NDE technique.

Anomaly: an indication confirmed by a second NDE technique but missing the information to determine if it is relevant or non-relevant.

Defect: one or more anomalies whose aggregate size, shape, orientation, location, or properties do not meet specified acceptance criteria set forth by the cognizant engineering organization.

There have been attempts (and still are) to generate some sort of a risk-based workable matrix that takes into account the aforementioned factors and gives the boatbuilder an at-a-glance opportunity to evaluate the relevance of the flaw. A typical example of this is the one put forward by the MCA in its Information Guidance Report for the Examination of Carbon Fibre Masts & Spars of Large Yachts, as referred to by the U.K. Marine Information Note – MIN (417) M.

Although the document is a good attempt toward standardizing a very complex subject, it is way too vague to be of any practical value. As a result, the most common approach remains the one to decide on a case-by-case basis. Also as the repair itself would need to be specified by the structural engineer anyway, it obviously makes sense to consult with him directly in the first place about the relevance of any given flaw.

Regarding dissemination of information, in most modern and “open-book” boatyards, flaws detected by NDE are communicated to boat owners and other parties involved (project managers, structural engineers, Class, etc.) by means of an online sharing facility where all relevant steps of the build process are recorded, and access to this information is given to all key people involved in the project.

Setting Up a Mobile Shop

Here’s how two experienced repair and refit technicians improved efficiency and stopped paying rent by switching from brick-and-mortar to a mobile shop. My partner Pete Grundvig and I have had… Read more »