At the origins of the Dodge industrial empire were two inseparable brothers, Horace and John, natives of a small Michigan town. The family was poor and the Dodge boys went to school barefooted. John preferred to look after horses, while his younger brother admired the passing boats on the nearby river. They had a younger sister, named Delphine. Horace loved above all to tinker, to invent small machines, and to play the piano, and his brother never seemed to raise his nose from reading books. At the turn of the 1900s, the Dodge brothers opened a little bicycle factory before operating a machine tool workshop. Horace had a genius for assembling high-precision parts. Soon, growing firms like Oldsmobile and Cadillac could not do without their subcontractor, the Dodge Brothers Company. Henry Ford also needed their services to manufacture some essential components for his first cars. As money to pay his bills was short, Ford offered to pay the two brothers in shares of his company. The Dodges’ fortune was made.

Horace Dodge could give free rein to his childhood love of boats. In 1903, when he was 35 years old, he bought his first 40‘ (12.2m) launch. The long, slender hulls of those touring launches were powered by steam engines designed and built by their owner. In 1910, he commissioned architect Henry John Gielow to design the 183‘ (56m) Nokomis, the family’s first large cruising yacht, powered, not surprisingly, by two Dodge steam engines. Following the 243‘ (74m) Nokomis II, in 1918, the automaker had Gielow design an even more prestigious yacht. The Great Lakes Engineering Works of River Rouge, Michigan, was in charge of constructing the largest steam yacht ever built in the U.S. Its length had to be limited to 262‘ (80m) to fit the locks of the Welland Canal and the Saint Lawrence River. 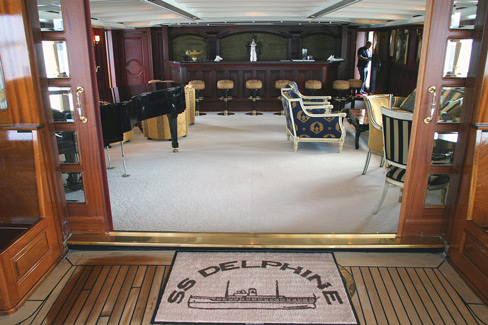 The main stateroom with piano and bar was restored, including the sliding windows with levers. On the bar is a thermos bottle in the shape of a coastal light, a gift from the Dodge family to Bruynooghe, recognizing Delphine II’s renaissance.

This private ocean liner, built of 12mm-thick steel, was christened Delphine II in homage to Horace’s sister and to his young daughter. Onboard saloons, smoking rooms, a great staircase, apartments with fireplaces and bathrooms, all paneled with precious woods, could host about 18 guests and a crew of 52. Horace Dodge decided he would personally design the engineroom with two quadruple-expansion engines of 1,500 hp (1,125 kW) each. Horace Dodge died of pneumonia three months before the launching of his masterpiece. His brother John followed him a few weeks later, struck by the same illness. On April 2, 1921, Horace’s daughter swung the traditional bottle of champagne on Delphine II’s hull. 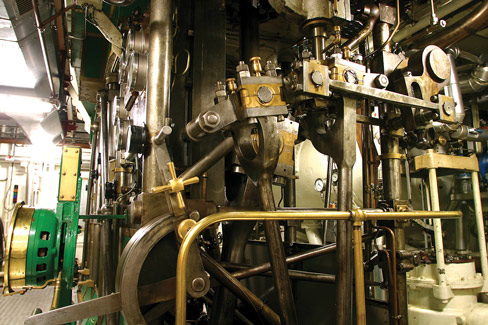 The two 1,500-hp (1,125-kW) quadruple-expansion steam engines were designed by Horace Dodge, who died just three months before the launching.

In 1925, Anna Dodge, Horace’s widow, and her sister-in-law made a fortune by selling their shares in the family business. Anna Dodge fitted the yacht for long-range cruising. The great steamer then voyaged around the Great Lakes and along the East Coast. During a stopover in New York, a fire sank the boat. The owner, who fortunately was not on board, had it raised and completely repaired by Brooklyn Shipyard.

Soon after the United States entered World War II, Anna Dodge received a requisition order from the U.S. Navy. In May 1942, the steam yacht was convoyed by a military crew from Detroit to Washington, where the Navy armed her with guns, painted her green and gray, and renamed her USS Dauntless. She was then assigned to the command of the chief of naval operations as the flagship of Admiral Ernest King. The USS Dauntless voyaged little during the war years but served as a residence and remote meeting place reserved for high-ranking officials. After the Japanese surrender, Delphine II was returned to her private owner, who refit her at great expense. 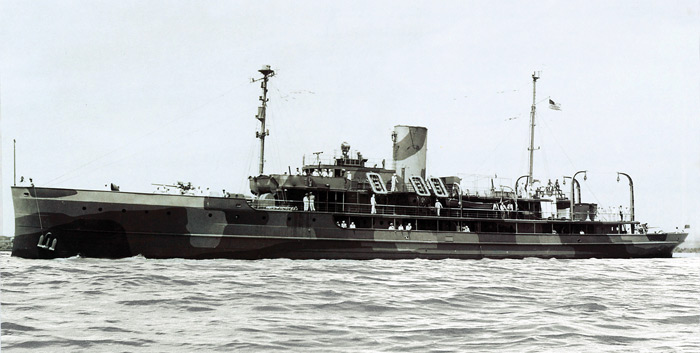 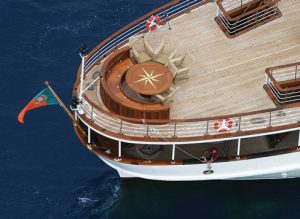 But times had changed and steam yachts definitely belonged to a bygone era. The aging ship, no longer of interest to the family, was entrusted in 1968 to a merchant marine academy. In 1989, a Singapore-based company bought the old vessel and sent it from America to Asia with a long stopover in Malta. Next, a French business group moved her to Marseille, where she was later abandoned. In 1997, Jacques Bruynooghe, a Belgian textile industrialist, came to the rescue, planning a huge restoration project and a charter business. The restoration took about six years. The steam engines underwent a fascinating reconstruction.

In 2003, Delphine II was relaunched as the last and only large steam yacht in the world, but Bruynooghe’s charter business was not successful. He put her up for sale in 2004 for €46 million, reduced 12 years later to €16 million. Today, this rare witness to a glorious era lies in Monaco awaiting a new owner. It’s listed for €19.75 million on www.jamesedition.fr.

[A longer version of this article was published in Classic Superyacht magazine in January 2012.]