When it comes to trade shows, the International BoatBuilders’ Exhibition & Conference (IBEX) and the Marine Equipment Trade Show (METS, in Amsterdam) are the pinnacles. There’s simply no other place where boatbuilders and marine trades professionals can see so much gear and cover so much ground as quickly and efficiently. I’ve attended both of these shows for over a decade. Each time I go I encounter new gear while reinforcing existing relationships.

Last year was no exception. Here are my top picks in new gear from the 2015 show season. 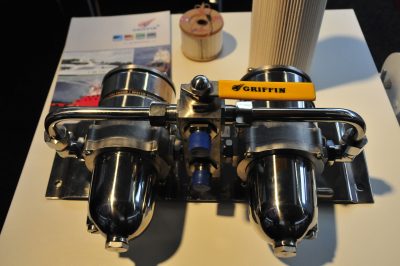 Let’s get the obvious out of the way first. These fuel filters bear a strong resemblance to those of a well-known major fuel-filter manufacturer. But if they were just a facsimile I wouldn’t be writing about them. The difference is that these filters are entirely cast or machined in 300 series stainless steel. I’m not ready to abandon the turbine series filter that’s been the standard for boatbuilders for decades; however, stainless steel offers decided advantages in especially demanding, wet, corrosion-prone environments.

In support of the filter housings, Griffin offers a range of filter elements in 2, 10, and 30 microns, using their Microbloc water-separating media. Filters are available in single, tandem, and triple versions, with flow rates ranging from 60 gph to 540 gph (flow rates for tandem and triple filters are when all elements are on-line, which is not recommended, as it leaves no filter in reserve). Accessories include heating elements, vacuum gauges, and water-in-fuel sensors. The filters are ABS-approved, and the folks at Griffin have indicated that additional approvals are forthcoming.

While the “Stable” story sounds Apocryphal, it’s not. Just over a decade ago a passenger aboard a cruise ship was frustrated at being unable to play billiards while the ship was at sea. The balls of course took erratic courses making the game impossible. After arriving home he challenged some of his engineer friends to design a billiard table that could remain perfectly level regardless of sea conditions. They developed just such a table, which was installed for testing aboard a ferry plying the route between Oslo, Norway, and Kiel, Germany. The test was a success; the table was stable.

One of the engineers working on the project, however, became seasick during the trials. His colleagues suggested he lie on the stabilized billiard table, and shortly after he no longer felt seasick. That episode became the genesis for the stabilized bed, and the Stable Stabilized Platforms firm.

When I saw the demonstration in the company’s booth at METS, it was impossible to walk by without stopping for a closer look. A platform rolled and pitched, simulating the motion of a vessel in a seaway. A Stable bed sat on top of that moving platform. On the bed was a tray with two wine glasses, a fish tank with fish, and a miniature billiard table, complete with balls and cues. Next to the bed setup was a large, oblong fish tank filled with water but no fish. 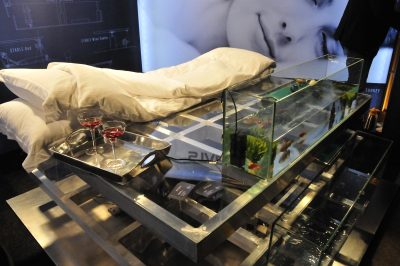 As the platform rocked and pitched, the water in the nonstabilized tank sloshed back and forth with sickening regularity (I’m susceptible to seasickness and was getting queasy just watching it). Yet, all of the “fluid” components on the Stable bed platform—drinks, billiard balls, and the fish and the water in which they swam—remained undisturbed, as if the entire assembly was bolted to the exhibit hall’s concrete floor.

The Stable range of products has grown from billiard tables and beds to include wine cabinets and wine cellars, decks, dining tables, a library, an operating room, a control room, and even a bowling alley. It would seem that virtually anyplace stability is sought at sea, Stable can provide it (at least in isolated pockets). 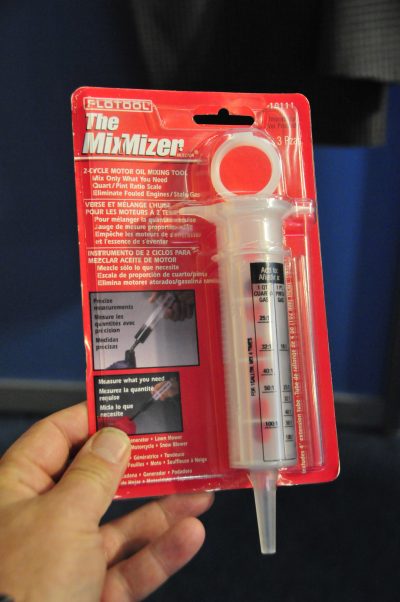 FloTool makes a huge range of small, inexpensive yet invaluable products for fluid handling, from filtering funnels and siphon pumps to used-oil containers and filter wrenches, to name just a few. It has over 20 different types of funnels alone. While I never specifically plan to visit their display, the gearhead in me is drawn to it, because I always find something of interest that elicits a “What a great idea” response.

As the owner of more than half a dozen two-cycle gas engines, I’m always on the lookout for a better way to measure and add oil to fuel. I have a selection of measuring cups and squeeze bottles with graduated receptacles for precision oil measurement. In spite of that, sometimes I’m not sure I’ve added the correct amount of oil for a given quantity of fuel. Enter the MixMizer. Shaped like an oversized syringe, its graduated markings make it easy to measure oil quantity for 16:1, 25:1, 32:1, 40:1, 50:1, and 100:1. It also includes ½-, 1-, 1½-, and 2-oz measurements. It’s ideally suited for bantamweight outboards and other small two-cycle engines.

In December 2011, Scott Smiles, Rick Matthews, and their two eleven-year-old sons found themselves floating and adrift after their boat sank with little warning 6 miles off the coast of Sydney, Australia. With scant seconds to grab essential safety equipment, they quickly clung to an ice chest and little else in the Pacific swells. The story ended happily when the quartet was rescued by a Westpac Rescue Helicopter.

That event inspired Smiles and Matthews to design a ditch bag that would, like an EPIRB or life raft, float free even if there was not time for retrieval. Their design is called the Life Cell, a ditch “module” that floats and whose contents are accessible by those in the water. Available in four sizes, the Crewman, Trawlerman, Yachtsman, and Trailer Boat, they can support eight, six, four, and two to four people, respectively. 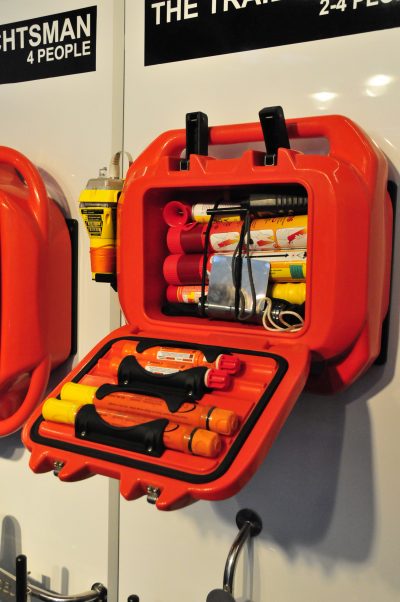 Each Life Cell holds critical gear including EPIRB, flares, horn, whistle, flashlight, and mirror. There’s also room to store water, a wallet, keys, a cellphone, sunblock, and a handheld VHF radio. The hard case, designed to float free from a sinking vessel (it does not utilize a hydrostatic release, although that may be something the manufacturer should consider), is equipped with a horizontal hatch that allows those in the water to safely and easily access its contents (sea conditions permitting, of course). The Life Cell is also equipped with lanyards that survivors can clip onto so they won’t drift apart. It comes with a two-year warranty.

Machinery oil analysis provides an early warning of potentially catastrophic and costly failures. The problem is that most users don’t sample and analyze oil often enough, if at all. By the time the sample is taken and checked, and results are returned, the damage may have already been done. 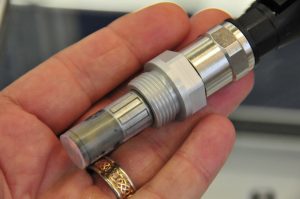 Gill, a U.K. manufacturer of sensors and controls, has come up with the next best thing to a full oil analysis: an oil-debris sensor. The sensor can be installed in an engine, gearbox, or other lubrication sump (it can take the place of the drain plug). It then magnetically accumulates and retains ferrous metal particles, preventing them from continuing to be distributed throughout the system. Using a sensitive monitoring algorithm, it then converts that signal into fine or coarse measurements. “Fine” indicates typical debris, meaning the oil is clean. But “coarse” indicates larger debris and possible gear or bearing damage. The sensor is suitable for high-temperature operation, and it works independently of oil type or flow rate, temperature, viscosity, oil opacity, or water content. Because its sensitivity is limited to ferrous metal, it doesn’t represent true oil monitoring; however, it is far better than no monitoring at all. 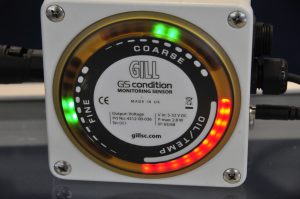 Gill has also designed what it calls the next generation of blackwater-tank monitoring. Reliably monitoring blackwater levels is, as any marine professional knows, challenging at best. Sensors and floats are exposed to a highly corrosive environment. They become encrusted with debris and give incorrect signals, or stop working altogether (also see “Blackwater Guide,” Professional BoatBuilder No. 162).

This is an area Gill knows well; it offers a full line of industrial and marine liquid-level sensors for fuel, water, and oil, all of which rely on solid state (no moving parts) capacitive technology. At the time this was written, Gill was in the final stages of developing a blackwater sensor that combines capacitive technology with a special nonstick surface. I inspected a prototype sensor at METS and remain hopeful that it will be a viable solution.

Underwater lights have become increasingly popular. One of their nagging weaknesses, however, is the necessity for drilling holes in the hull, below the waterline—something that makes boat owners and builders uncomfortable, particularly when the holes are for optional accessories such as lights. 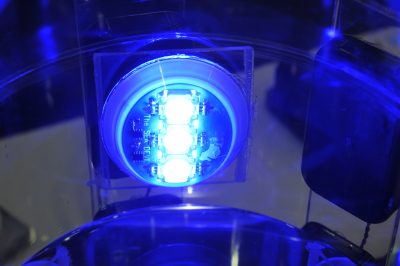 Nightwatch Marine has overcome this hurdle by creating a light that adheres to the hull with an industrial adhesive. That eliminates the mounting hole, but what about wiring? That too has been eliminated by using inductive technology, which electromagnetically transfers electricity. The same technology enables AC transformers, electric toothbrushes, and rangetops. A “transmitting puck” is adhered to the inside of a fiberglass hull (no more than ¾”/19mm thick) to power the LED light. I see no reason that the lights couldn’t be used above the waterline as well.

The manufacturer’s website is a bit primitive. There’s no phone number and no business address, other than a large-scale map that pops up with a contact form (I googled a national park on the map to identify the state, Idaho). In response to filling out the contact form, I did hear from Pam Harrington who informed me that her husband, Dan, is the inventor and manufacturer, and they are moving to Nevada. Almost nine months later, however, and the website remains unchanged. Still, the product is intriguing.