Designer Andrei Rochian says the X43 Flybridge Express is the first series-produced fiberglass motoryacht to be built in Manchuria, China.

After four-and-a-half years of work on tooling, molds, and construction for a 43‘ (13.1m) motoryacht, a northern Chinese firm, dba XSYacht, has launched its first hull, targeting Chinese, Southeast Asian, and Russian markets. Designer Andrei Rochian says it is the first series-produced fiberglass motoryacht built in the “Industrial North” of China, more specifically Shenyang, capital of Manchuria, the ancient home of the Qing Dynasty. A candidate worthy of industry recognition, the X43 is also a reminder that the Communist Party of China has changed a great deal in recent years with its approval of accumulating personal wealth and luxury goods.

The X43 is under construction in the new plant in Huludao City, Liaoning Province. In the house-style buildings are administrative offices. 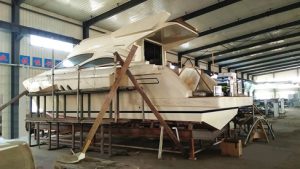 Builder of the X43 is Shenyang Mechanical and Electrical, which, like some other Chinese industrial companies, is diversifying into boatbuilding.

With this build, the company Shenyang Mechanical and Electrical, located in Huludao City, Liaoning Province, Xingcheng Binhai Economic Development Zone, is diversifying into boatbuilding, a not-uncommon story line for Chinese boatbuilders, says Rochian. He adds that to his knowledge there were no yacht builders in northeast China before this. “There is,” he says, “a French investment [company] making aluminum boats, another company making fiberglass catamarans, another one making sail yachts, but none producing proper fiberglass composite flybridge motoryachts.” However, he observes that the Wanda Group, based across the Bohai Sea in Dalian, now owns Sunseeker International in the United Kingdom. And there is a boat show in Dalian, a city of 3.5 million people—further evidence of China’s growing appetite for luxury products (Rolls Royce sold 3,785 automobiles to China in 2015). 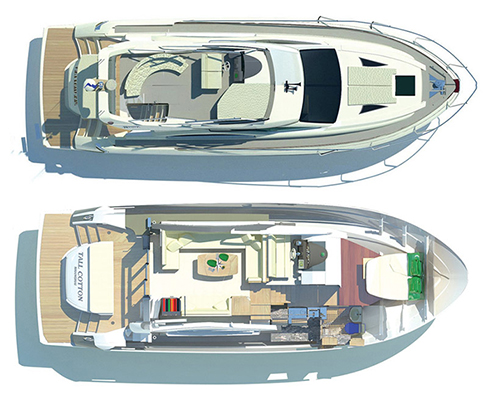 The aforementioned X43 Flybridge Express Motor Yacht features two staterooms with en-suite baths. Construction is vacuum-infused fiberglass with a solid bottom and Herex PVC foam core in the topsides, deck, and flybridge. The skincoat is vinylester for protection from osmotic blistering. Bulkheads are cored with PVC foam. The hull–deck joint is mechanically fastened and bonded. Gelcoat is by Ashland. The bottom is finished with two prime coats of International Micron CSC followed by three coats of Gelshield.

Rochian’s marine background is varied and far flung, highlights of which include: seven years training in the Romanian naval academy, three years in the School of Crafts and Arts, and post-graduate degrees; hands-on experience restoring a Riva runabout and a 42‘ (12.8m) wood sloop named Roquette, designed and once owned by Peter Nicholson of the British firm Camper & Nicholsons; project manager for a 63‘ (19.2m) composite cruising catamaran for Prout Yachts International in China; engineer in the mechanical engineering and design department of the Royal National Lifeboat Institute (U.K.); design work for Regal Boats in Orlando, Florida; designer of a 40‘ (12.2m) aluminum sailboat currently under construction in South Korea; and many other forays in Europe, the U.S., the Middle East, and Asia, even yacht deliveries. Currently he is the Lead Innovation Design Engineer with URT composites in the U.K.