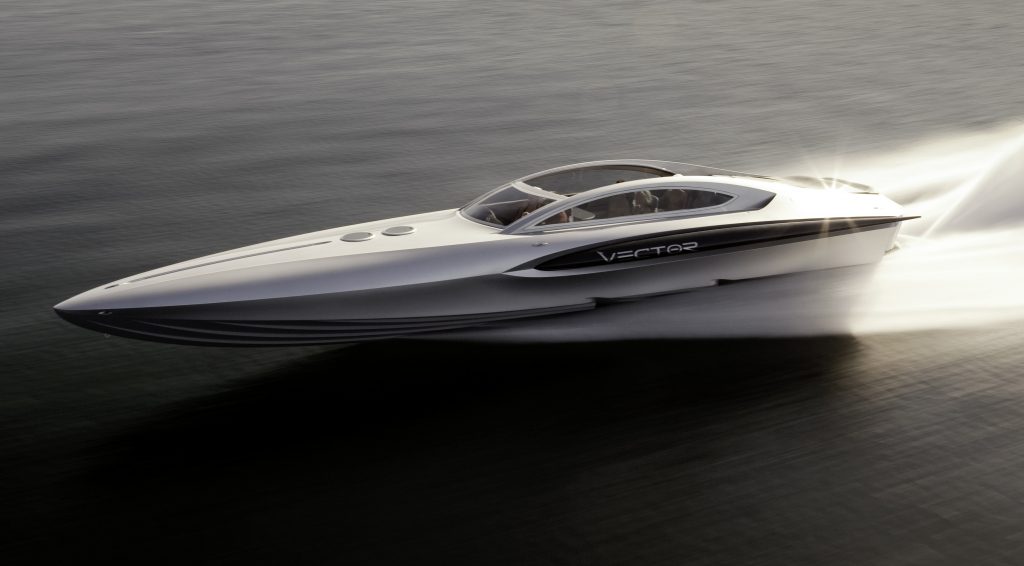 Last May, while on location near Stockholm, Sweden, preparing a profile of Hamnvägen-based Mannerfelt Design Team for Professional BoatBuilder magazine (see the cover story of PBB No. 163, Oct/Nov 2016), I enlisted CEO Ted Mannerfelt’s assistance in selecting images of specific MDT projects for that article.

From a file drawer in a cabinet outside his office, Ted handed me a color print of the boat pictured here: the Vector 40 (41.9’/12.8m). “It’s a development of the B-28,” he said. “A direct descendant.” The B-28 (28’/8.5m)—an unusual delta-winged raceboat that created quite a buzz when first exhibited at the 1994 edition of the Miami Boat Show, and later, post-show, when successfully campaigned in APBA-sanctioned offshore races in Florida and elsewhere—was designed and engineered by Ocke Mannerfelt, Ted’s father and the founder of their design firm. 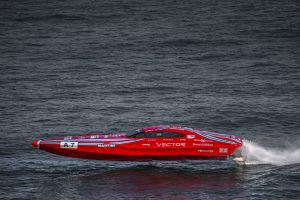 A full description of the B-28 in Miami opens the PBB article on the Mannerfelts. The Vector 40—a MDT project completed in 2009 for Vector Powerboats (Kelowna, British Columbia)—was featured in a preliminary layout of the story; however, in the final layout that went to press, the Vector 40 image was replaced by a photo of the raceboat version, the V-40R. A V-40R competing with Martini Racing colors recently won its second consecutive Cowes–Torquay–Cowes event along the south coast of England, a prestigious but punishing endurance race covered previously by PBB in its profiles of designer-racers Renato “Sonny” Levi and Fabio Buzzi.

The Vector 40, which seats six and sports a lounge area under the long foredeck, is composite-built and structurally reinforced with Kevlar and carbon fabrics. Beam is 3.1m/10.2’, but 4.4m/14.4’ with its retractable winglets (“stabilizers”) deployed. Weight is 5–6 tons, depending on power—either two 700-hp/522-kW or two 1,200-hp/895-kW gas engines. The latter pair delivers a speed of 110 knots. Ted Mannerfelt did the exterior and interior design; Ocke, the naval architecture and engineering. Vector Powerboats also builds the Mannerfelts’ patent-protected B-28 design, for which it is the sole licensee.