The men from Down Under—brothers Greg and Patrick Johnston—who described their revolutionary “soft” sail system in Professional BoatBuilder No. 140 (“Working-Class Wing”), and in more detail on our website ProBoat.com (“VGWS Rigging Details”), have collected no moss on their invention or their behinds. In the few years following they were instrumental in developing a one-design sport boat designed by Argentina-based Nicolas Goldenberg, G Yacht Design, specifically for their clever sail design. 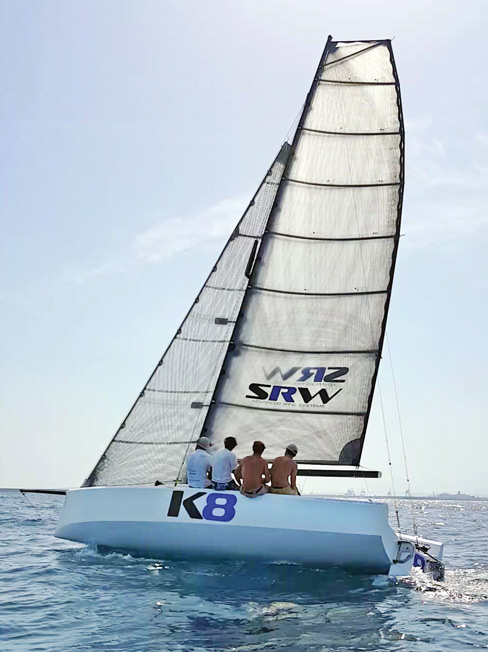 The Australian brothers Greg and Patrick Johnston, who developed what they describe as the “world’s first and most awarded production soft-wing sail,” had a 26.2′ (8m) sport boat designed specifically for their innovative rig.

Patrick Johnston wrote to tell us that “in 2015 the K8 was nominated for Yachts and Yachting sports boat of 2016. I am very pleased to tell you that we won the award.” The magazine published a detailed account in its February 2016 issue. “The K8 has so far proven to be a very fast and easy yacht to sail,” says Johnston.

Now called the Semi-Rigid Wing (SRW), the Johnstons’ sail is paired with the 26.2‘ (8m) K8 sloop. Essentially, the SRW has two fabric skins over flexible battens that change the sail’s shape according to outhaul tension and mast rotation. The two membranes are set on adjacent tracks on the trailing edge of the mast and taper aft to a single leech. As the mast is rotated, leeward battens compress and curve, automatically placing the windward-side battens in tension. Depth of the sail or foil is determined by the mast angle. Mast drag is minimized; the sail is more stable than a conventional sail; and the result is smoother airflow over the foil as well as less corresponding need for minute helm corrections.

The brothers tested the sail concept on Australia’s popular 18-footers (5.5m), Windsurfers, and 28‘ (8.5m) yachts, but felt a new design tailored to the SRW would help advance awareness and acceptance, hence the K8. Built in Fremantle, Western Australia, with help from Windrush Yachts, construction is E-glass with carbon reinforcements in high-stress areas, such as the tops of ring frames. The single-chine hull shape is full forward and has a reverse bow. The lifting T-shape keel has a 506-lb (230-kg) bulb, and there are twin rudders for good control, as the boat is intended to be sailed with significant heel.

The prototype K8 was shipped to Valencia, Spain, for trials and media exposure, but because Patrick Johnston says managing the program from Australia has proved difficult and expensive, the boat returns to Australia this year to be raced by the brothers “as a sports yacht at local clubs.” The most interest in the soft-wing sail, he says, is coming from owners of existing boats looking to improve performance; at present he and his brother are working with two clients in the U.S.

Johnston told us, “We are also working on A Class catamaran rigs with a very well-respected yachtsman. Also off-the-beach cats in general and Moth rigs; the production details for all these are well advanced. In addition to this, we are offering a Mini Transat–inspired AWS 650 version of the RG 650. The boat will be available in a number of specification levels from basic E-glass with aluminum SRW mast all the way to a full carbon boat with canting keel. This will be a pocket rocket and be very affordable.”

He’s confident that in time their innovations will gain traction: “After all, we do have the world’s first and most awarded production soft-wing sail.”