When a boat owner complains about frequent tripping of an equipment leakage circuit interrupter (ELCI), a marine electrician’s first thought should be: “I must treat this as a genuine electrical fault,” rather than dismiss it as faulty hardware or nuisance tripping. 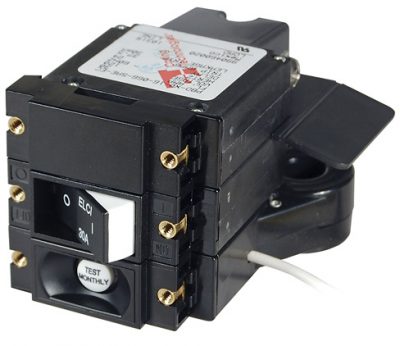 Unlike a GFCI (ground fault circuit interrupter), an ELCI, or residual current device, circuit breaker, such as this one from Blue Sea Systems, offers whole-boat protection.

ELCIs, also known as residual current devices, or RCDs, have been used industrially for many years, gaining popularity aboard boats only in the last decade. The American Boat & Yacht Council’s (ABYC) first introduction of a standard that included ELCIs was in 2008; however, its implementation date was postponed because reliable ELCI circuit breakers were not yet readily available. With that problem resolved, ELCIs are now installed on most new ABYC-compliant vessels, though the tripping—nuisance and genuine—issue remains. Unlike ground fault circuit interrupter (GFCI) receptacles, ELCIs provide whole-boat protection. To account for cumulative small leakage and prevent nuisance tripping, the threshold for an ABYC-compliant model is 30 mA. (In comparison, a GFCI has a threshold of 5 mA, and as such is considered in North America to be appropriate for protecting people.)

It’s worth reviewing how these devices work. Much like a common GFCI receptacle, ELCIs remain in a state of equilibrium, allowing energy to flow as long as the current on the hot and neutral wires remains the same. As soon as current finds an alternative path back to its source—through a ground wire, the water, or a human—the imbalance trips the ELCI’s circuit breaker, and the power is turned off. While ELCIs are technically deemed “equipment protection” because of their 30-mA trip threshold, the goal of ELCIs is to interrupt current flow quickly enough to prevent electrocution, electric shock drowning, or fire; and for the most part they do so very effectively, saving many lives every year.

However, that ELCI trip threshold of 30 mA is still comparatively and necessarily low, which means it doesn’t take much of a fault or collective smaller faults to open the circuit. When confronted with frequent tripping, the challenge is to find the fault and determine if the ELCI is defective. Common faults or sources for tripping include appliances whose internal insulation is failing, electric ranges, water heaters, and self-testing galvanic isolators, as well as genuine miswiring, such as interconnection of ground and neutral aboard the vessel (for more on that subject, see “Demystifying the Neutral-to-Ground Connection” on www.proboat.com). In the majority of cases, the fault lies aboard the vessel rather than in the ELCI itself.

To assist with troubleshooting such tripping scenarios, Blue Sea Systems, of Bellingham, Washington, has developed a simple Field Test Kit that quickly identifies the source of the problem as either the ELCI or the boat. If the leak source turns out to be a genuine fault aboard the boat, the technician may have to do a lot of investigation, but at least time and money aren’t being wasted in replacing the ELCI. The ELCI Test Kits are easy to use, and the average test takes just 10 minutes. The testers are available free of charge to ABYC-certified marine electricians, as well as to other qualified individuals on a case-by-case basis. For more information or to obtain a Field Test Kit, contact Blue Sea Systems technical support at 1–800–222–7617 or e-mail techsupport @bluesea.com.