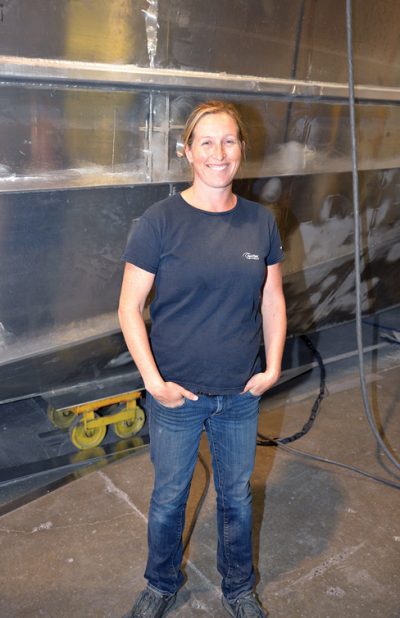 Kristi Benwell founded Liquid Metal Marine in 2000 on her own after losing her two planned partners.

About 16 years ago Kristi Benwell had just completed her fabricator’s certificate at Armstrong Marine in Sidney, British Columbia, when the company relocated to Port Angeles, Washington. Benwell and two other employees decided to form their own company in the same facility and call it Liquid Metal Marine. Tragically, before opening, one partner was killed in an accident, and within a year the other opted to follow Armstrong and work for the company in the United States. Undaunted, Benwell continued on her own, as she felt she had a great team working for her. She was soon joined by fabricator Dave Scott, who oversees operations on the shop floor.

In the beginning, Liquid Metal Marine Ltd did refits for the Armstrong Marine boats originally built in Sidney. Then Benwell asked Cory Armstrong (see “The Strong Stuff,” Professional BoatBuilder No. 152) to come to Sidney and help her start production of an 18‘ (5.5m) runabout. Liquid Metal Marine grew from there into building custom boats, but it’s also working on a line of production vessels. Benwell: “By offering a production line, we can make available a base package from which customers can get into a welded aluminum boat at a more attractive price point. Our production line is just a building base; customers can always add custom features if desired.” 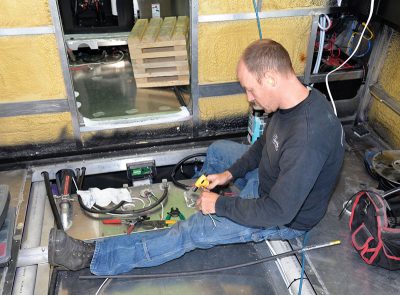 To that end, she has commissioned work from three designers: Bruce Cope (www.aluminumboatdesigns.com), located in Qualicum Beach, B.C., for boats under 16‘ (4.9m); TEKnaval, in Victoria, B.C., for boats 18‘–24‘ (5.5m–7.9m); and Gregory C. Marshall Naval Architect Ltd, also in Victoria, for the larger vessels. Currently in the shop are two Gregory Marshall designs, a 28‘ (8.5m) recreational boat as well as a custom 60‘ (18.3m) catamaran that will be used by Eagle Wing Tours, a local whale- and wildlife-watching company.

Partnering and cooperation are prevalent between marine businesses on Vancouver Island. This is apparent in Liquid Metal Marine’s fabrication of a custom 60‘ catamaran. The company is completing the hull, but the cabin and aluminum components are being completed by All Keeler Metals, another area business. Two other local companies, Sea Power Marine Center supplies the engines, and Polar Bear Equipment completes all the upholstery. Finishwork is being completed by industry professionals alongside Eagle Wing’s own staff.

This 27’6″ (8.3m) model in the Salish recreational series, distinctively black, is set up for fishing. 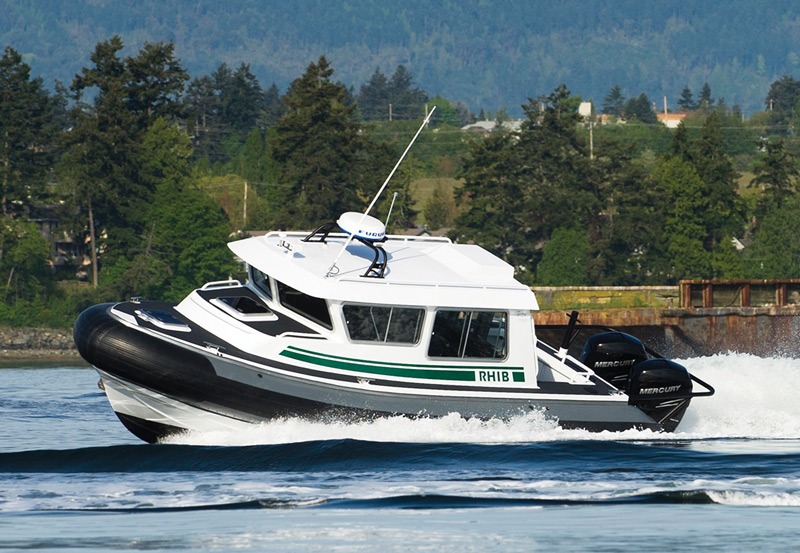 A 30′ (9.1m) RHIB in the Knight series can be configured for various applications, including search and rescue. The forward-raked windshield is the preferred style in the Pacific Northwest.

Liquid Metal Marine has averaged about 10 on staff, including fabricators, welders, apprentices, a diesel mech­an­ic, an ABYC-certified marine electrician, a purchasing specialist, and a general office manager. When there are increases in work, qualified staff are not always easy to find; the company is looking at the possibility of working with Quadrant Marine Institute’s apprenticeship program (see “Developing a Strong Boatbuilding Com­munity,” Rovings, PBB No. 162). Benwell says, “It’s a big challenge to find and hire staff that are capable along with having the specific marine industry background necessary.

“When we take on an apprentice, they’re committed to being here while completing the training courses; [we are] hoping that in the end we’ve developed a qualified Liquid Metal Marine employee, which benefits both the employee and the company.” 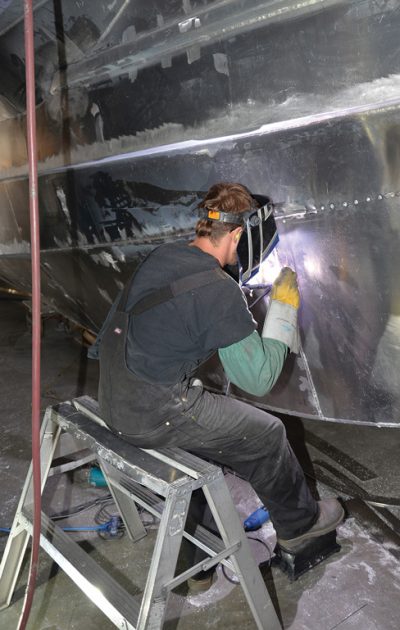 Above and bottom right: Welders work outside and inside the bow sections of the 60′ (18.3m) Greg Marshall–designed whale-watcher catamaran.

As a qualified fabricator, Benwell often floats between the office and the shop, helping keep projects and production on time and on budget. That work includes managing vendors to her best advantage. Whereas Liquid Metal has generally cut parts in-house, now it is outsourcing more jobs. By having naval architects and designers draw boats, CAD cutting files can be generated and e-mailed to the subcontractor, which Benwell considers more efficient and cost-effective. “We’re just making the shift from our cutting them,” she says. “Now K&K Industries, in Bellingham [Washington], and CJM Technologies Ltd, in Delta, B.C., do that for us. It saves labor costs and layout time and makes more sense to do router cutting. But [dealing with U.S. vendors] we have to be really careful because of the exchange rate.” At this writing, $1 USD equals $1.30 CAD. That difference, however, also works to Benwell’s and other Canadian builders’ advantage, with U.S. buyers “coming north” to expand their purchasing power.

Liquid Metal Marine builds with standard aluminum alloys—5086 and some 5083 for hull plates, and the 6000 series for extrusions. Several vendors supply the bulk of material: Wilkinson Steel and Metals (wilkinsonsteel.ca), with a warehouse in nearby Victoria, is favored for same-day deliveries, and Alaskan Copper & Brass Co. (www .alascop.com) based in Kent, Washington, for delivery direct to K&K in Bellingham (kkindustries.com).

And while Liquid Metal Marine has its own shear and press brake, it is finding efficiencies in having at least one supplier “kit” prebent panels. The shop that cuts panels for the Cope-designed production boats is now bending, too, saving Liquid Metal Marine time. 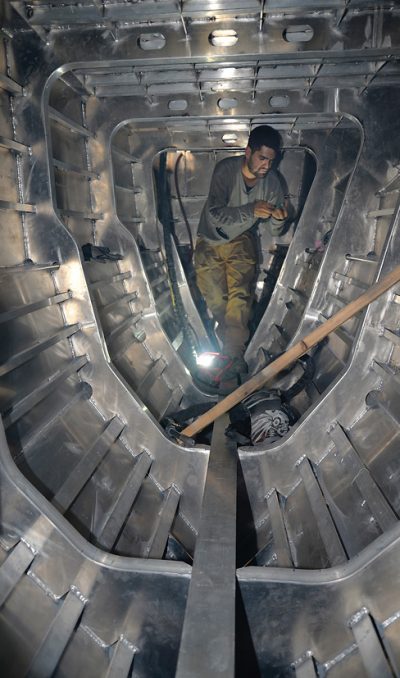 As Benwell develops models and processes for building and marketing lines of production designs, sales become an issue. Whereas customers for custom designs might always have been handled in-house, increasing sales of production models might now require developing a dealer network. Benwell points to another aluminum builder, Silver Streak Boats, at the south end of Vancouver Island in Sooke, which has successfully developed a dealer network. “We’re interested in that option as well,” she says. “We’re watching how Silver Streak manages this area of business, which so far appears to be successful.”

One thing is certain: Benwell is committed to building in aluminum. While private and government contracts seem to favor composites on the East Coast, the Pacific Northwest has always preferred aluminum. Workboats there have traditionally been aluminum. “You can beat ’em up, and throw ’em on the beach, which aren’t always sandy here,” she says. “We’re moving more into recreational design. Choosing an aluminum boat doesn’t mean you have to have a cold, uncomfortable workboat; it can be the kind of boat your wife and family will also enjoy. You can have the best of both worlds.”