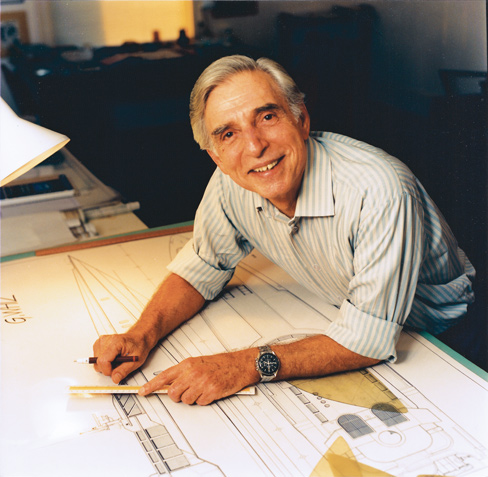 Sonny Levi in his design studio. He was still actively working on propulsion problems in his late 80s.

In 1992, designer-engineer Renato “Sonny” Levi (pronounced levee) published Milestones in My Designs, a large-format hardcover book highlighting then-40 years’ worth of his marine “projects,” which he summarized this way: “…cir­cuit and offshore racers, pleasure craft, workboats, record breakers; outboard, inboard-outboard, inboard, petrol [gasoline] and diesel engines; conventional transmissions, waterjet propulsion, air screws or surface propellers; construction materials ranging from solid timber to laminated shells, from plywood to aluminum, from mild steel to stainless steel, from fiberglass to reinforced cement; dimensions stretching from 10 to over 100 feet [3m to 30m], power units giving from under 2 to 3,500 hp [1.5 kW to 2,625 kW], speeds between 5 and 300 knots.”

What that list doesn’t mention are the skillsets Levi brought to those projects. He ran full-service boatyards; could hands-on build in any medium specified above; went elbow-deep installing or repairing marine systems; was an accomplished sailor of one-design raceboats and traditional cruisers alike; excelled as a helmsman in offshore endurance powerboat racing. Regarding the latter, Levi’s record of success racing what he designed, in prestigious events such as Cowes–Torquay and Viarregio–Bastia, ignited interest among several of the world’s wealthiest yachtsmen. They became client-patrons, helping Levi to sustain an independent solo design practice and consultancy for much of the long arc of his career.

After visiting Levi at his Isle of Wight, U.K., studio in the spring of 2011, I assembled two articles in Professional BoatBuilder (see PBB Nos. 135 and 136), guided by his big book. The first article offers some biographical background (born to Italian parents in British India, educated there and in France, flew Spitfires in the RAF near the end of WWII, studied aeronautical engineering in England after the war), and then presents seven significant Levi designs that appear in Milestones. They’re an arbitrary best of the best, since Levi had already cherry-picked his own archives to feature some 18 seminal designs, including their evolutionary predecessors and progeny. In the book, certain powerboats merited cutaway, perspective views; PBB reproduced four of those. 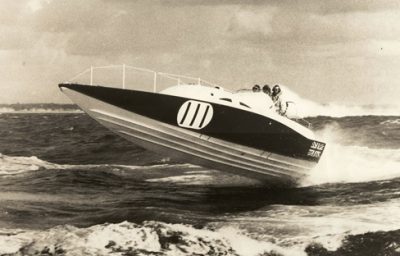 The 36‘ (11m) Surfury, the embodiment of Levi’s Delta deep-deadrise hullform, was powered by twin 1,050-hp (783-kW) Daytona engines. She won the 1967 Cowes–Torquay race, and is now on permanent display at Britain’s National Motorboat Museum.

One was the 36‘ (11m) Surfury, a Cowes–Torquay winner in 1967 and presently displayed in Britain’s National Motorboat Museum; she is perhaps the finest expression of Levi’s line of Delta hulls, which rivaled the deep-V’s of American Ray Hunt, a Levi contemporary. Another important vessel was the 72‘ (22m) Virgin Atlantic Challenger II, a “moderate Delta” and the first planing boat to beat (in 1986) the transatlantic records set by fast ocean liners. In the second of our PBB articles Levi discussed in detail VAC II’s patented drive system and its development; that piece was taken from one of three technical appendices in Milestones.

Sonny Levi died in his Isle of Wight home November 12th, at age 90. But the design legacy lives on. At www.sonnylevi.com, managed by his son, Martin, you can now purchase a copy of Milestones (as well as Sonny’s earlier book, Dhows to Deltas, plus selected boat plans). And, at www.leviboats.com, Martin and an Italian shop are producing an updated Corsair performance motoryacht; this 30‘ (9.1m) boat’s parent hull was a one-off Sonny entered in the inaugural Cowes–Torquay event. (See my article “Direct Descendant.”)