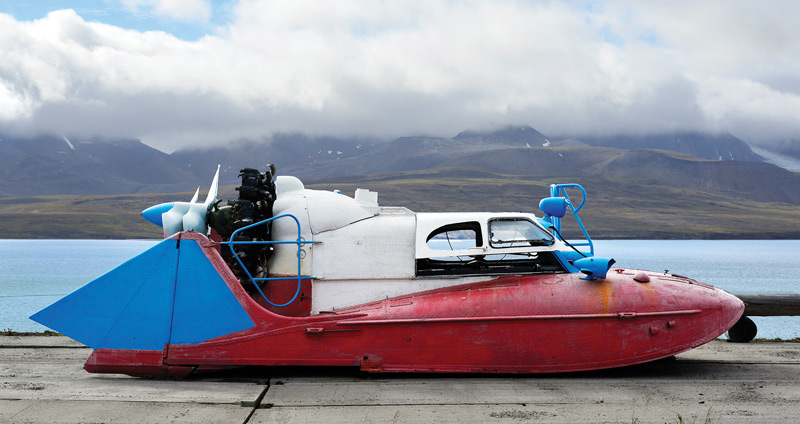 This forlorn Soviet-era Tupolev A-3 Aerosledge ground effect vehicle resides near the Russian mining village of Barentsburg. The A-3 was in production from 1964 through 1983.

Neither aircraft nor hovercraft, hydrofoil nor seaplane, ground effect vehicles (GEVs) are phenomena unto themselves. The U.S. and U.S.S.R. researched GEVs; however, the latter could be said to have run with it, in typical Soviet grand fashion. The Soviet Central Hydrofoil Design Bureau, led by Rostislav Alexeyev, carried out pioneering work with these craft, eventually developing what is now probably the best-known design, even by non-GEV aficionados: the KM, which stands for Experimental Aircraft in Russian, lead the CIA to dub it the (K) Caspian (Sea) Monster. The allure of GEVs is their ability to carry very heavy loads using less power and therefore less fuel (the KM could carry 50% more weight than a conventional cargo aircraft of the same size, burning half the fuel). The closer a GEV flies to the ground, the more efficient it is, as evidenced by its stubby wings; longer wings aren’t needed because they simply add more drag. 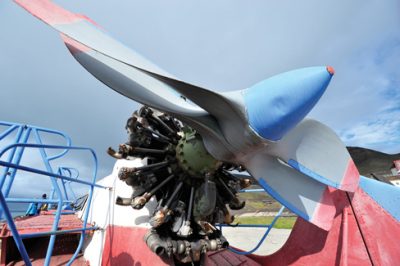 While visiting the Russian coal-mining village of Barentsburg, located in the Svalbard Archipelago, I encountered a baby brother of the KM, the Tupolev A-3 Aerosledge. Sort of a hybrid GEV/amphibian, it was inspired by the KM design concept; at speeds over 50 mph  (81 kmh) it generates lift. Its draft when afloat is a mere 2” (51mm). Relying on a 5-cylinder, 260-hp (195-kW) “pusher” radial aircraft engine with twin 6‘2” (1.9m) fixed propellers, the A-3, known as the Nadezhda (Russian for “hope”), was produced from 1964 through 1983, with more than 800 built. The A-3 is capable of carrying five passengers, who enter and exit through twin gull-wing doors. Payload is 1,433 lbs (649 kg) over snow or ice, and 661 lbs (299 kg) over water. Although a few were used for military applications, for retrieval of downed pilots for instance, most were employed in remote regions of the Soviet Union, particularly Siberia, and Eastern Europe to deliver mail and supplies, and provide medical assistance and evacuation.

As you can see in the old video below, the A-3 is capable of traveling over any flat surface—water, snow, marsh, and tundra. Its construction is very similar to an aircraft’s, using riveted 2mm D-16T “Duralumin” plate, a double bottom with a polyethylene skin to reduce friction, and encompas­sing three watertight compartments; literature indicates it can float with one flooded. Built near Moscow, most units were later fabricated at a helicopter factory in Ukraine.

The forlorn and weatherworn craft I saw is perched well above the water, on a concrete pad not far from the mining facility’s cavernous indoor sports complex; it has what appears to be an optional boarding platform. The propellers would not turn. Most winters the fjord on which the mine is located ices over completely, and thus it’s likely that the A-3 was used to ferry passengers, light cargo, and mail to and from ships traveling to the edge of the ice. No one at the mine seemed to know anything about Nadezhda; it seems a shame for it not to be salvaged. In 2015 a fully restored and operational model, designated N007, sold at the renowned Barrett Jackson automobile auction for $220,000.