A year ago, after publication of an item in this column titled “Jim Wynne, Volvo, and History of the Sterndrive” (PBB No. 161), New Zealander Peter J. Morgan wrote to say that credit for invention of the aforementioned should properly be credited to then MIT student Charles Strang, and not to Jim Wynne. The year, he wrote, was 1948. Of additional interest, Morgan described working in 1968–69 as a “young engineer” for Thunderbird Products Corp. in Miami, Florida.

Morgan’s career in design, engineering, and  boatbuilding actually preceded his work with Thunderbird, and continued after he returned to his native New Zealand. In an addendum to his letter regarding the sterndrive, he wrote: 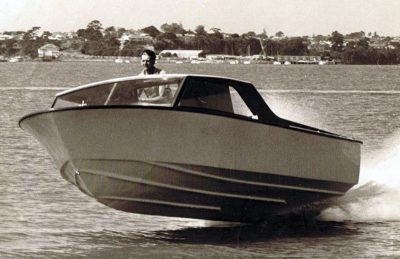 A young Peter Morgan designed and built what he says was the first composite sandwich boat in New Zealand, the 20′ (6m) Aurora, cedar-stripped and sheathed with fiberglass and epoxy resin.

Following assiduous study of Ray Hunt’s Bertram 25 and Walt Walters’s Formula 233, Morgan designed and built Aurora with 12mm (1⁄2“) cedar strip-planking sheathed with epoxy/fiberglass woven rovings, based on research he’d done on the strength and stiffness of composite sandwich panels at the University of Auckland’s School of Engineering. Power was a 5.3-liter Chevrolet V8 delivered to a MerCruiser sterndrive. The boat was put into production as the Clipper 20 from 1966 to 1970. A few years later Morgan decided to modify the plug for what would become the Morgan 6•3. How he went about this is a tribute to, and representative of, the ingenuity of boatbuilders:

“The most powerful outboard then available was the Mercury 140, which was by today’s measure of prop shaft power, about 135 hp. The longest outboard shaft length then available was 20“ [508mm], so the use of a rear flooding compartment to sink the original 25°-deadrise hull down to its chines was out of the question, as the powerhead would have been far too close to the water surface. My solution was to modify the hull bottom by adding a long wedge along each chine flat, lowering the chines at the transom by 76mm [3“], and warping the section of bottom between the outside edge of the outer spray strake and the inside edge of the chine flat. Thus the deadrise on this outer section of bottom reduces progressively from 25° midships to 2° at the transom, giving an overall deadrise at the transom of 20°. My idea was to gain acceptable stability at rest, with single outboard power. Also, I raised the topsides by about 150mm [6“], incorporating a knuckle where the original gunwale had been. This allowed me to design a very low-profile cuddy cabin that people say still looks modern to this day. Although it looks low, there is full sitting headroom on the bunks for me, and I was 6‘ 51⁄2“ [1.97m] back then. 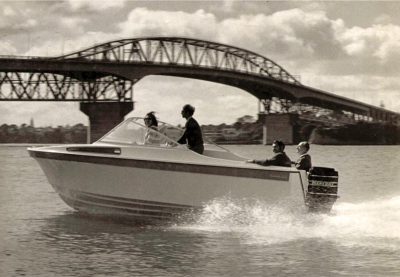 To make the Morgan 6•3, Aurora was modified by adding a wedge along the chine flat and warping the bottom of the plug.

“Sometime in the first half of 1975 while I was having my daily shower, it suddenly occurred to me that I could make a plug for a smaller boat hull by cutting up a 6•3 and joining it back together. So I had the Morgan 6•3 hull mould gelcoated, then I filled the outer spray strake and the inside of the stem with ‘bog’ and had a new plug made by using only chopper-gunned fibreglass mat, to a total thickness of about 10mm [7⁄16“]. I tabbed in a moulded stringer grid, a plywood false transom about 800mm [31“] for’ard of the existing one, a couple of transverse plywood bulkheads so that when released from the mould, the plug would retain its shape accurately. I made a width-adjustable wooden cradle on which to sit the hull, and then used a carpenter’s pencil and a piece of plywood about 300mm [12“] long and 178mm [7“] wide to mark more or less parallel lines along the inside of the hull from bow to stern, straddling the centreline, and vertically up the bulkheads. Next, I cut along the lines with my jigsaw, and slid the two halves together on the adjustable cradle, keeping the deadrise angle at 25°. I then joined the two halves permanently together by gluing and screwing doubler plates on the bulkheads and fibreglassing along the centreline of the inside of the hull shell. I cut round the hull to remove the ‘knuckle’ that I had added to the original Clipper 20 hull when making the Morgan 6•3 hull plug, to reduce the height of the topsides back to the same as those of the original Aurora. Next, the new flat transom was added, and the large radii at the corners were achieved with cardboard, filler, and fiberglass. Then we turned the hull over and proceeded to whack the bottom spray strake off with a cold chisel. Next, I used an angle grinder to give the stem a rounded shape, similar to the original 6•3’s.”

At 75 Morgan is still actively working, specializing in the forensic analysis of marine engines and heavy-truck mechanical failures.