Our profile of independent Swedish naval architect Petter Håkanson in Professional BoatBuilder (see “Fast Boats for Professionals. Plus a Few Yachtsmen.” PBB No. 167, June/July 2017) concentrated on his career to date, and designs built. However, due to space limitations in the magazine, we were unable to show some new designs mentioned in the text—of which only a few have been built so far, or they’re still in the project-stage as of this posting.

For those of you unfamiliar with Håkanson’s portfolio, he is a preeminent designer of high-performance combatant craft and similar professional boats for demanding maritime applications such as enforcement and interdiction, search and rescue, and counter-terrorism. These small craft are also favored by discerning yachtsmen, who order semi-custom variants. We focused on three yards in the Stockholm area building Håkanson designs: Dockstavarvet (varvet means shipyard; the name Docksta is derived from the municipality), Rupert Marine, and Vector ProBoat.

In recent years, Docksta has been producing a series of aluminum military boats at different sizes and configurations, which share a Håkanson parent hullform and the designation “IC,” for Interceptor Craft. The latest and largest of these is the IC-20m (65.6’). Among IC-20s built for purely professional applications, Håkanson is pleased to point out that “the interior is extremely quiet in all compartments, even at 50 knots.” Håkanson’s rendering for a recreational “VIP” model is seen here. 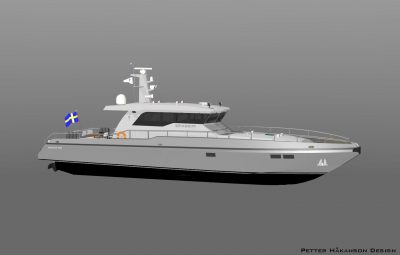 In the magazine article, we showed a yacht version of an inboard-powered Rupert 50 (15.2m) composite RIB. Håkanson is presently finalizing the design of a custom-built Vector 14.5m (47.5’) professional-style aluminum yacht for a client whose current craft is a muscular, semi-custom Rupert 50. This owner’s new boat will be powered by four Mercury Verado outboards of 400-hp (298-kW) each, equipped with heavy-duty gearcases; anticipated top speed is 60 knots. 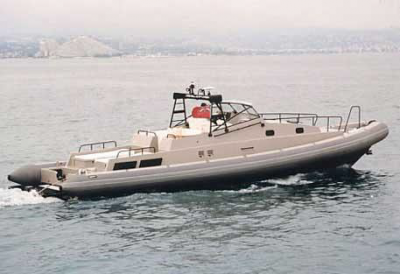 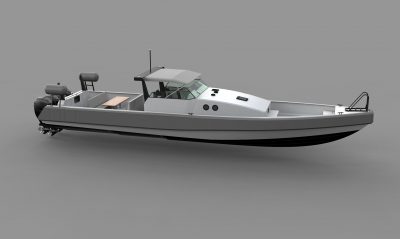 Note the ladder-like appendages at the stern of the Vector. Those are custom-designed so-called flopper stoppers specifically requested by the client; or, as Håkanson describes them, “outriggers that can be electrically folded down and locked in place during displacement mode. This way the owner can change the boat’s oscillation characteristics and prevent rolling, even at different wave frequencies. We actually don’t know if they’re necessary, but we’re preparing for them, and testing them.”

Two other Vector projects in the works, at 25’ and 32’ (7.6m and 9.7m), are essentially developments of models in the existing product line, at 23’ and 28’ (7m and 8.5m). According to Håkanson, the 25—a “compromise in size and price” versus the 28—has attracted prospective buyers; the 32 is a model Vector “would like to produce in the future.” All of these boats are designed and built, “in principle,” for combat, meaning: relatively narrow deep-V hulls capable of maintaining high speed in rough conditions; robust construction and fitout; great emphasis on house/helm environment and ergonomics; and available with multiple general arrangements and propulsion systems.

Directly below, are renderings of the Vector 25 and 32, along with arrangement drawings for the 32. The final photo is an outtake of the 28 launching off a wave at HSBO 2014. That’s Petter Håkanson in the rear window. 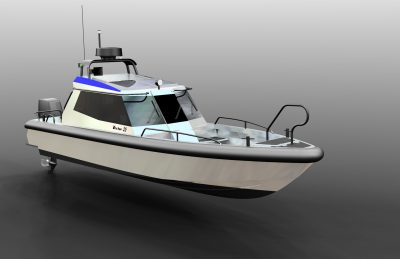 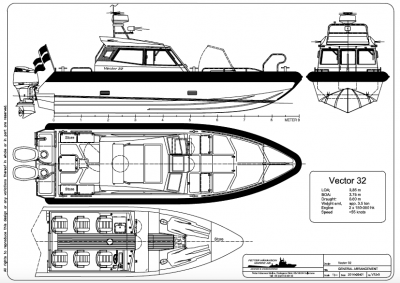 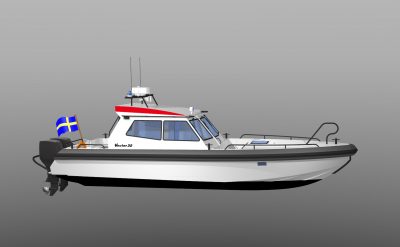 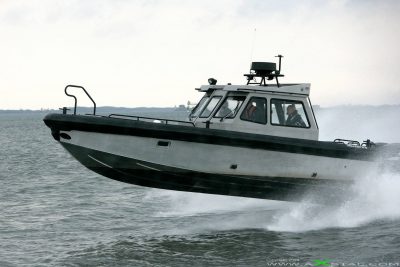 Subscribe to Professional BoatBuilder magazine to read the story mentioned above and access the past year’s issue archive. It’s free for qualifying members of the marine industry. Click for more information.