No, the famed multihull designer and builder won’t be appearing on the popular television show anytime soon, but you can hear him tell seafaring tales on a growing series of recorded podcasts and videos.

By way of background on Jim Brown, he gained attention in the 1950s by building an Arthur Piver–designed trimaran and cruising it extensively. This formed the basis of his series of Searunner trimaran designs, which were intended for home construction in plywood. To advance his affection for multihulls he wrote several books, including The Case for the Cruising Trimaran and Among the Multihulls. He also helped develop the Constant Camber method of hull construction, in which identical plywood panels are formed over a mold by gluing precut strips of wood veneer, similar to cold-molding. Brown exported his methods to developing countries to help fishermen build simple working watercraft. So you might say he’s seen a thing or two. Search the PBB online index for articles with his byline, the most recent of which was the Parting Shot “Foil Train Coming,” in PBB No. 156, where he shares his enthusiasm for Peter Johnstone’s large foiling G4 catamaran. 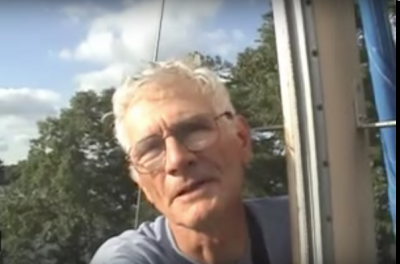 Jim Brown aboard the Scrimshaw. This screenshot was taken from a video he narrates about living aboard his famous Searunner trimaran.

The most recent of Brown’s 30 podcasts, posted on outrigmedia.com is titled “Stranded on a What?!” The 28-minute yarn recounts a 1981 cruise aboard his and his wife Jo Anna’s trimaran Scrimshaw, in which they decide to cruise from their Virginia home to Nova Scotia. The guitar prelude and Brown’s folkie talking style reminds one of preambles by folksinger Pete Seeger. Serious fog is encountered off the coast. Wouldn’t you know, there’s a large commercial fishing fleet working the banks. And the crashing waves are indistinguishable from the sound of breakers on the treacherous rock ledges. After three days of playing cat and mouse with steel hulls, they decide to head offshore rather than make landfall. If you’ve ever been off the New England coast in fog and attempted to ascertain your position with a radio direction finder (RDF), you’ll appreciate his account of fumbling with that thankfully now-obsolete device. Before GPS, that’s all we had. Eventually Jim and Jo Anna make an anchorage in St. Margarets Bay, whereupon they meet an unusual cast of characters living in a shanty while building what’s described as a castle for the owner. As they get to know one another, of course they tell sea stories, one of which is about a man stranded on a dead whale, his boots sinking into “stinking, decomposing blubber.” Yes, you read that right.

Besides outrigmedia.com, the source of these podcasts and a place to buy books and CDs about Jim Brown and other multihullers, check out Brown’s own website at www.outrig.org, dedicated to preserving the history of multihulls.

Brown’s growing multimedia output also includes videos that he narrates on multihull pioneers, and a series about sailing and living aboard his famous Searunner trimaran Scrimshaw, such as the one posted above. To see a list of more videos, visit http://www.outrig.org/outrig.org/Videos.html.