The first tender from Ocean 1 Yachts served its mothership, Meteor, and 27-person crew during the recent America’s Cup in Bermuda.

Some things never change…except boats go faster and faster. In 1957–58 Jakob Isbrandtsen, owner of the 12-Meter Easterner competing in the America’s Cup trials off Newport, Rhode Island, bought an early deep-V powerboat designed by C. Raymond Hunt as tender (which, in the now familiar story, inspired Dick Bertram, crewman on the competing Vim, to commission Moppie, which won the 1960 Miami–Nassau race and launched Bertram Yacht Co.). This year, as 50‘ (15.2m) foiling catamarans competed for the Cup in Bermuda (New Zealand won), the teams needed a support boat bigger and faster than Easterner’s 23-footer (7m). The cats are capable of speeds in excess of 40 knots.

Dean Maggio, 51, is skipper of the elegant 167‘ (51m) schooner Meteor (built by Royal Huisman in Vollenhove, The Netherlands), whose owner enjoys the Cup scene and was aboard his yacht during the races. Familiar with the event, Maggio perceived an unfilled niche market for a versatile, fast tender to the syndicates; he is also well acquainted with other superyacht skippers and owners who could be interested in essentially the same boat.

Enterprising and independent, Maggio commissioned the design of a 36‘ (11m) center-console, outboard-powered boat via Michael Peters, who allowed his assistant, Michael Welton, to take on the project. With twin 300-hp motors, the boat is capable of speeds approaching 50 knots. Fuel capacity is 345 gal (1,306 l).

Welton on the hullform: “The boat has a 22.5° deadrise with a pad keel; a pad keel was chosen both for the slight performance advantage due to the lower deadrise sections providing more lift as well as the reduced likelihood of tripping over the keel in an aggressive turn. Both the chines and strakes turn down as you move aft, to help with high-speed stability as well as added stability in a turn.” 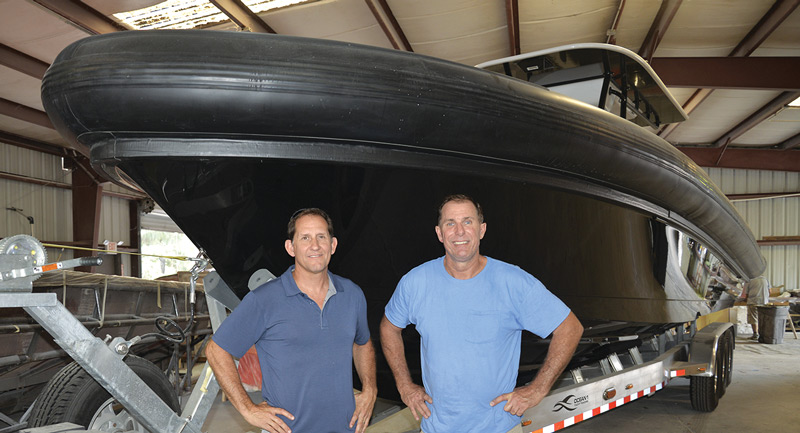 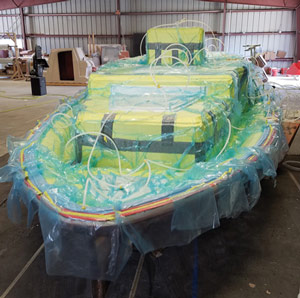 The hull and deck are cored with Corecell and infused. Reinforcement kits are from Composites One.

During a recent visit to the Ocean 1 Yachts shop in Sarasota, Florida, I looked over hulls #1 and #2. To supervise construction, Maggio brought in Robert Helmick, who came over from Calcutta Marine (see Rovings, Professional BoatBuilder No. 162, page 12). The hulls and decks are cored with Corecell and infused, giving a dry weight of 2,400 lbs (1,087 kg). Composites One kits the reinforcements. Stringers are filled with 4-lb foam. Tubes are from Henshaw Inflatables in the U.K. On motherships big enough to carry the tender, three pick points—two at the stern and one at the bow—allow it to be lifted by crane.

In Bermuda for the races, Maggio says hull #1 performed well, often transferring all 27 members of Meteor’s crew ashore and back, logging 195 hours on the motors during their three weeks among the islands. “We unloaded her off the ship, launched, picked up our first party, and never stopped. Fuel consumption averaged 1.4 to 1.6 miles per gallon. We couldn’t be happier with its performance.”