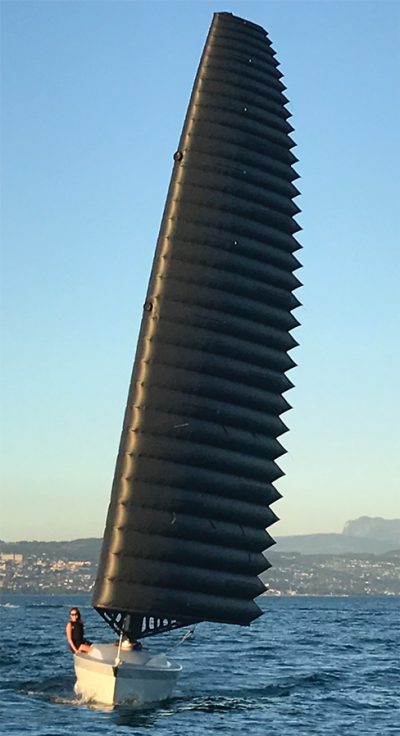 The Inflatable Wing Sail has interesting attributes such as the absence of compression forces.

Just when you think there’s nothing new under the sun, some engineer finds a new way to build a mousetrap—not necessarily better but undeniably different. May we present: the Inflated Wing Sail, or IWS.

Swiss sailmaker Edouard Kessi has been pushing the envelope of wings for more than 30 years. Co-owner of the Voiles Gautier sail loft in St-Prex, he became intrigued with paragliders and inflated textiles and formed Ailes de K, which originated production in 1984–85. According to Internet sources, Kessi’s business partner Laurent de Kalermatten is considered the father of paragliding.

For sailboats, Kessi has long experimented with membranes as quantum improvements over traditional sailcloth. In fact, he developed and patented the technology that led to 3Di, which he sold to the North Sails Group. In the last issue of Professional BoatBuilder, No. 169, page 16, we reported on North Thin Ply Technology (NTPT), which Kessi helped found in 2001, and later it made the black carbon sails for 2007 America’s Cup victor Alinghi. Currently, it manufactures an Automated Tape Laying machine to spread untwisted fiber tows into flat, unidirectional tapes that are super thin.

Back to the Inflated Wing Sail. It’s a double-skin fabric forming a symmetrical airfoil inflated by fans located inside the leading edge. The “mast” is a retractable, freestanding metal structure. There are no stays. Benefits listed on the company’s website include: NACA airfoil; symmetrical shape means no trimming required when tacking; aero­dynamic center “stays stable in every wind condition”; and remains balanced “to place itself in the best position to maximize the driving force.”

The IWS was developed by a Swiss sailmaker who is also active in paragliding. It is set on a retractable “mast.” Electric fans keep the sail inflated.

A study of the drawings, photos, and video on the company’s website quickly reveals the absence of control lines—with the lone exception of the mainsheet—and deck hardware. There are no compression forces, no leech tension, and no local stresses. One can jibe by letting the sail rotate 360° in front of the mast (what happens to the mainsheet isn’t clear; Kessi did not respond to requests for an explanation). The prototype was installed on an 18‘ (5.5m) sailboat and tested on Lake Geneva.