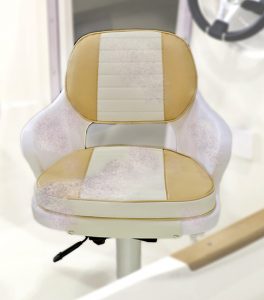 The pink stain sometimes seen on white-vinyl seat cushions is caused by Streptoverticillium reticulum bacteria; the stain can’t be scrubbed off, so preventive measures are recommended.

Ever observe faint pink discoloration of white vinyl boat cushions and wonder what it is? It’s right up there with wanting an explanation for the “green flash” that sometimes occurs when the sun falls below a crisp, clear horizon (waiting and wondering is a popular tourist activity on Key West’s Mallory Square). Well, the green flash has been certified real and explained as the eclipse of refracted and separated light colors, starting with the longest wave length; and now the cause of confounding pink stain that resists cleaning also has been revealed. The following was extrapolated from a short piece written by Hugh Barrett, a technical consultant with APV Engineered Coatings in Akron, Ohio.

First, there is a difference between pink stain and “pinking.” Pink stain is caused by the growth of microorganisms on the surface of a “plasticized vinyl or other polymer”: specifically, Streptoverticillium reticulum, a bacterium often found in soil and rotting vegetation. Sound useless and obscure? Actually, Barrett says streptomycetes account for two-thirds of “the clinically useful antibiotics of natural origin.” Here’s a weird piece of trivia. After World War II the U.S. Army experimented with streptomycin for serious infections: the first patient died; the second went blind; and the third, Robert J. Dole, was cured and went on to become a U.S. Senate Majority Leader and a candidate for president.

Pinking, on the other hand, is a discoloration caused by the “overoxidation of phenolic compounds commonly used as antioxidants.”

According to Barrett, you can’t clean pink stain, because it has been absorbed into the vinyl. Better, he says, is to think about prevention. To prevent the growth of Streptoverticillium reticulum you can apply a biocide such as arsenic (not recommended for reasons of safety) or organic compounds such as iodine and zinc. Zinc pyrithione (ZPT) is an effective treatment, which brings us to weird fact #2. “ZPT,” writes Barrett, “has been used for over 50 years to effectively treat dandruff and has become the most common material for that purpose, e.g., Head & Shoulders shampoo.” 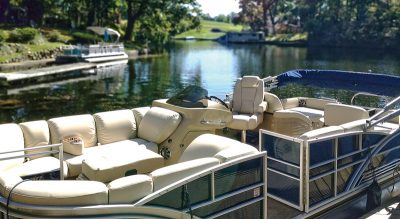 The cushions on this boat have been treated with APV’s Vynguard Weldable PVDF (polyvinylidene fluoride) to seal and protect the vinyl from ultraviolet rays, and from Streptoverticillium reticulum bacteria.

A different approach to preventing pink stain is to seal the vinyl surface; Streptoverticillium reticulum won’t grow “where there is nothing to eat.” Such a coating is PVDF (polyvinylidene fluoride, or the trademarked Kynar). APV makes two suitable products, Vynguard Weldable PVDF and Vynguard with Kynar PVDF, that will not allow plasticizers to pass through them. Combine ZPT with a water-based slurry and apply to the top, back, and inside of seat cushions. Streptoverticillium reticulum, you see, can get to top surfaces through the back door by being absorbed on the underside of the substrate.

So there you have it: pink stain on white vinyl is caused by bacteria.