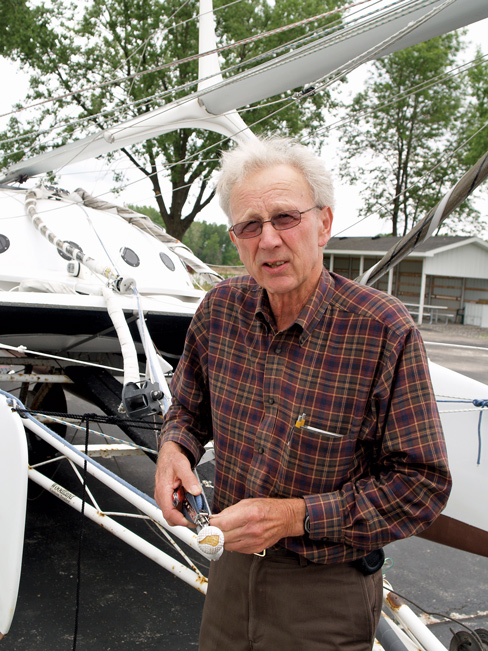 Meade Gougeon works on a piece of rigging for a 32‘ (9.8m) catamaran designed by brother Jan. In the 1960s Meade and his brothers, Joel and Jan, built DN iceboats, raced them on Michigan’s Saginaw Bay…and never really stopped.

One of the most remarkable and influential people in boatbuilding passed away last August 27 from skin cancer at the age of 78. With brothers Joel and Jan, Meade formed Gougeon Brothers Inc. in 1969 to formulate and market WEST System epoxy resins and accessories. The name WEST stands for Wood Epoxy Saturation Technique, a process he developed to improve on traditional cold-molded hulls, in which multiple layers of thin wood veneers are diagonally stapled over frames and coated with low-viscosity epoxy resin to lock the pieces into a stiff monocoque structure. Living as the boys did on Saginaw Bay, inside Michigan’s thumb, racing iceboats was a popular winter activity. Soon they began building them—200 between 1969 and 1974.

From the beginning the Gougeons were true believers in wood; its excellent physical properties confirmed their conclusions in numerous lab tests they performed. But noting that just 25% of the strength of a good mechanically fastened joint is transferred, they began an intensive search for a means to join wood parts without fasteners. As any carpenter knows, wood and glue go together like a horse and saddle. Popular glues such as resorcinol required high clamping pressures in the order of 125 psi (862 kPa), and they were not suitable as coatings. With the aid of Herbert Dow, grandson of Dow Chemical Company’s founder and an avid iceboater, the Gougeons were introduced to a chemist who helped formulate an epoxy resin that functioned as a glue and as a coating to seal in desired moisture content of the wood used in construction.

Confident of their direction, Meade quit his job as an industrial salesman, and Joel, who flew 131 combat missions in the Vietnam War, contributed some of his savings. Along with younger brother Jan they bought a building on the Saginaw River and continued building boats—more DN iceboats and then the first all-WEST System boat, the 35‘ (10.7m) Adagio trimaran. The year was 1970. No metal fasteners were employed in the boat’s basic structures.

In the early days all three brothers worked in the boat­shop, commencing an impressive build list: the trimaran Victor T, which won the C-class Nationals in 1969; the Ron Holland–designed Golden Dazy, which won the 1975 Canada’s Cup; the 60‘ (18.3m) proa/sloop Slingshot, intended to break the world’s speed record under sail; the 60‘ Rogue Wave that newspaperman Phil Weld commissioned to compete in the OSTAR from Plymouth, England, to Newport, Rhode Island; and the Gary Mull–designed Hot Flash Half Tonner. All were cold-molded: lightweight, stiff, and strong. The boatbuilding world took note—not so much for the cold-molding construction process, but for their epoxy.

Word traveled locally at first, and eventually across the U.S. and to Europe and elsewhere. And not just among boat people. J.R. Watson, an early employee who spent a lot of time in customer service, recalls people calling and wanting to know if WEST System epoxy could repair a toilet tank. Indeed, GBI’s newsletter, Epoxyworks, advises readers on a very wide range of applications, many of which can be classified as home improvement. 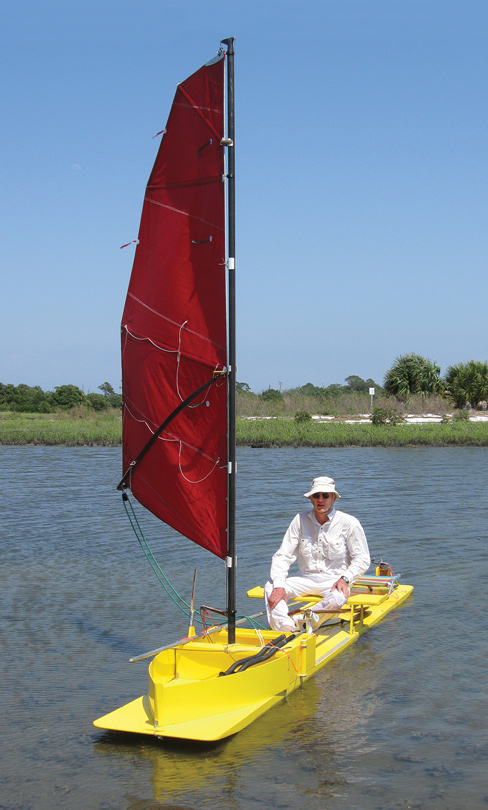 Yellow Thing was one of Gougeon’s many small boats devised for his sailing pleasure.

By the late 1970s it was only natural that someone of Meade’s intellect desired to gather the company’s collective knowledge and share it via publication of a book. As it happened, Meade advertised for a writer/editor to join the GBI team, and I answered. My “interview” consisted of three visits to meet the brothers in Bay City, where I was given the assignment to read the book manuscript for The Gougeons on Boat Construction  and offer my thoughts on how it could be improved. The last of the three visits was to the family’s Fourth of July picnic, I guess to see if I was a good fit. Meade offered me the position, which for a variety of reasons I regretfully declined. But we became friends, perhaps in a way not possible if I’d become an employee.

While GBI became a profitable business, developing new product lines such as custom PRO-SET epoxies for other industries, including aerospace, Meade was always a boatbuilder at heart. It became customary for new employees to build a boat in the shop, where there was plenty of guidance available. Current CEO Alan Gurski, Meade’s son-in-law, built a Gougeon 12.3 when he came on board in 2007. 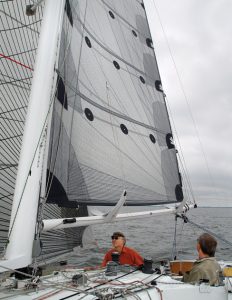 Meade (left) and Jan Gougeon sail the first WEST System boat, the trimaran Adagio, on Saginaw Bay, in 2009, for a 40th-anniversary story in this magazine.

Meade loved to sail and he liked to keep things simple, though on my last sail aboard Adagio he admitted there were no more control lines left to add. The boat had been totally tricked out. He developed a keen interest in small wind-driven boats. He and pal Hugh Horton used to get away in the Whalesback Channel area of Lake Huron’s North Channel. Horton says Meade was always well aware that his father had died of a heart attack (on Christmas morning) when Meade was still a teenager. Taking control of his diet and fitness regime, Meade always stayed in great shape; indeed, he won the North American DN iceboat championship at age 58—a remarkable feat. And just this year he won his class in the 300-mile Everglades Challenge from Tampa to Key Largo—competing in a sailing canoe. (In his feature “First Encounter,” on page 48, Jim Brown shares Randy Smyth’s account of sailing past Meade in that race.)

Few figures in boatbuilding were more admired than Meade—for his intellect, passion, dignity, and generosity.