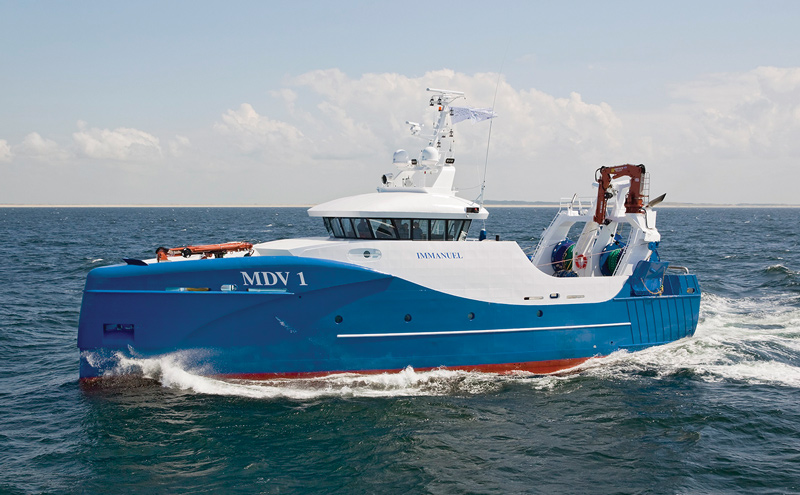 MDV-1 Immanuel is a 99′ (30.2m) Dutch fishing vessel developed under the country’s Masterplan Sustainable Fishing Foundation initiative that sought to rethink all aspects of drag netting for ground-fish like plaice and sole.

In the workboat sector, much fanfare has surrounded the Dutch-built MDV-1 Immanuel, which possesses attributes that should interest recreational boaters as well.

First, the 99‘ x 28‘ (30.2m x 8.6m) Immanuel is the result of a government/business collaboration, namely The Netherlands’ Masterplan Sustainable Fishing Foundation (Masterplan Duurzame Visserij, or MDV), which saw its commercial fishing fleet halved over the last decade. Vessel size and type varies, though many are working the relatively shallow coastal waters for the flatfish plaice and sole. In 2012 MDV solicited business plans for a vessel that would exhibit efficiencies in all areas of its operation, from propulsion to onboard systems, catch, and processing. It was designed by Kramer Marine Engineering (Zwijndrecht), utilizing CFD software from D3 Applied Technologies (A Coruña, Spain), and working from initial input from MARIN (Wageningen). In plan form it is wedge-shaped, with a near vertical bow. According to one description, it has “a full body amidships and a wide and relatively flat aft ship, with little transom immersion.” Wider sections above the bow waterline are intended to create reserve buoyancy and reduce spray on deck. Engine cooling water enters one side of the short and wide bilge keels and exits the other, eliminating external pipework that causes drag.

Constructed by Padmos (Stellendam), in collaboration with many allied businesses, Immanuel was launched in 2015, winning the Dutch industry’s prestigious KNVTS Ship of the Year Award. Hoekman Shipbuilding (Urk) did the outfitting and much of the engineering. While other commercial fishboats in The Netherlands are typically transverse framed every 17.7“ (450mm), the engineering of Immanuel concentrated on the longitudinal stiffeners with corresponding fewer transverse frames. Steel was chosen over composites for several reasons, including the economics of end-of-life recycling. 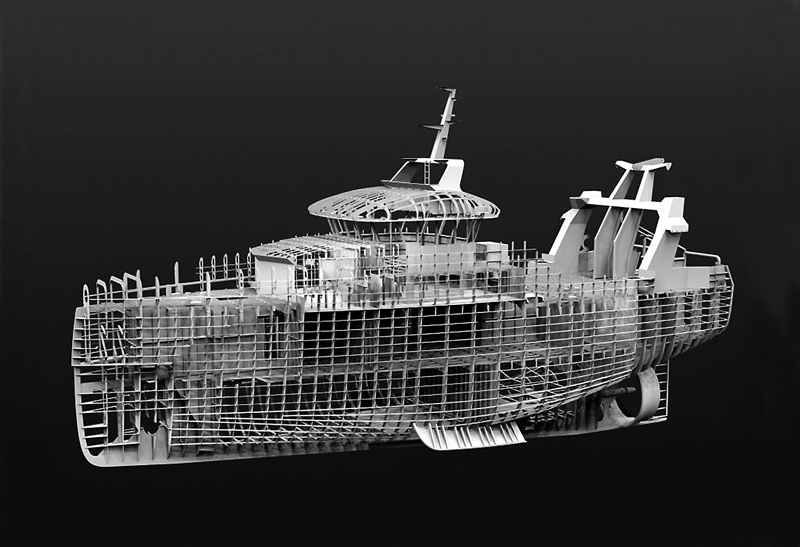 The boat was designed by Kramer Marine Engineering and built by Padmos and Hoekman Shipbuilding, all three Dutch companies. It won an industry award as Ship of the Year. Structure focused on longitudinals and wider-spaced transverse frames.

Propulsion is diesel-electric with a variable-speed generator and DC bus. The 500-kW generator is employed at cruise speed and while fishing; a second, smaller generator is a backup. A 400-kW water-cooled permanent magnet motor turns the main propeller at 120 rpm. There is no gearbox and attendant loss in efficiency. Four Unidrive M variable-speed drives from Control Techniques are for the rotary transformer, hydraulic pumps, fishhold cooling system, and the pulse fishing windlasses. Pulse, by the way, involves the ship emitting a low-voltage electrical charge that supposedly does not injure flatfish in the bottom sand, but makes them rise so net drags can scoop them up. 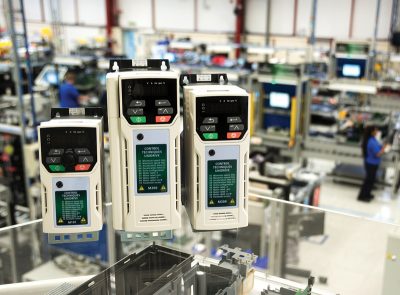 Immanuel is a diesel-electric hybrid. Hydraulic systems that include pumps, as well as the windlasses, cooling system, and transformer, are powered by permanent-magnet motors governed by Unidrive M variable-speed drives from Control Techniques.

After more than a year in service, the vessel has shown 60% fuel savings compared to similar 2010 fishing boats, reports say; 60% reduction in CO2 and NOx; and gas/oil per kg of fish reduced from 4.5 liters to 0.5 liters. Crew conditions improved as well (55-dB noise level in the cabin and accommodations), and “uninterrupted cooling chain for optimum fresh fish.” Fishing speed is about 3 mph and an economic steam rate about 10 mph. Immanuel is in service 100 hours per week.