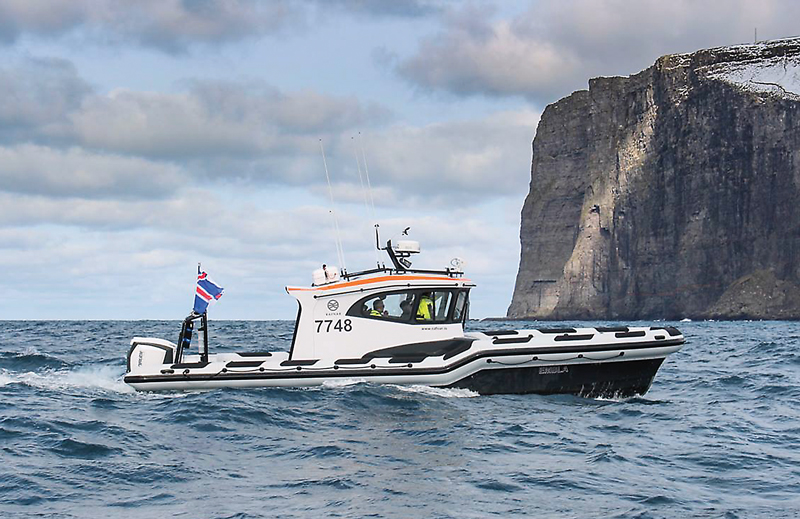 To demonstrate the seaworthiness of the ÖK Hull, a team from its builder, Rafnar, took an 11m (36′) RIB 1,307 nm, from Iceland to Norway and Sweden, averaging 26.3 knots.

Engineers, designers, and assorted freethinkers abhor the notion implied by the aphorism “There’s nothing new under the sun.” If it were true, technological progress would come to a standstill and they would have nothing to do. In the boating world, this seemingly boundless creativity is well illustrated—sometimes brilliantly, sometimes fatally—by various gizmos and gadgets…boat cleaners, hooks, and anchors come to mind. So, too, with hullforms. In these pages, we have examined numerous innovations (the word does not necessarily imply success), from the Hickman Sea Sled to Harry Schoell’s DeltaConic, which found its way into production with companies such as Larson, to Chris Rickborn’s patent for an Ellipsoidal V-Hull (see Professional BoatBuilder No. 166), which to date has been demonstrated only in a prototype. Fortunately for all of us who are fascinated by boat design, the pursuit of new superior forms is never-ending. Enter the ÖK Hull.  From Iceland no less.

The inventor is Össur Kristinsson, who established himself in the 1970s as a leader in prosthetics and orthotics, surely a science that intelligently marries form and function. He has also been an active shareholder in a company (Hafmynd ehf, now Teledyne Gavia ehf) that designs and manufactures Autonomous Underwater Vehicles (AUVs). In 2005 Kristinsson founded the company Rafnar to design and construct a series of boats with his now-patented hullform; the first boats out the door were in 2015. In 2017 Kristinsson demonstrated the hullform’s qualities at the Fort Lauderdale Inter­national Boat Show. Assisting in that introduction was Patrick Estebe of Affairaction Corp., who gave a positive report, saying that “anyone experiencing the Rafnar revolutionary ride” becomes an enthusiastic believer in the ÖK Hull.

In simpler terms, the ÖK Hull features a narrow keel at the center of the running surface, perhaps half the length of the waterline. Its concave sections transition into the hull with a series of ever-wider convex shapes. Kris­tinsson says he was inspired by the work of Fredrik Ljungström and his “arc-of-circle radius” hullform.

This rendering of an upside-down ÖK Hull offers a clear view of the keel and running surface.

Asked to amplify, Rafnar’s Thorsteinn Sig­urbjörnsson says, “The ÖK Hull is scalable and is therefore not limited to any particular set of dimensions. The ÖK Hull design is based on a particular formula that takes into account the weight and dimensions required and scales the hull for that particular utility. The ÖK Hulls for the boat series that we produce now, Flengur 850 and Leiftur 1100, were designed specifically for those models. The Leiftur 1100’s length overall is 11m and beam 3.2m [36.1‘ and 10.5‘ ]. The Flengur’s overall length is 8.5m [28‘ ], whereas its beam is 3m [9.8‘]. The Flengur provides a larger stable platform, making the boat an ideal workhorse, whereas Leiftur’s dimensions are better utilized for speed and precision handling, with a narrower, leaner body and a sharper keel, which allows for tighter grip in turns. We have designed and built 12m and 15m [39‘ and 49‘] vessels on the ÖK Hull, and in addition have designs for catamarans as well as 24m and 38m [79‘ and 125‘] yachts.

“The ÖK Hull is in essence a displacement hull with planing hull characteristics, despite the boat never actu­ally planing unless trimmed to do so. Instead, the water that hits the bow is forced along the bottom of the hull, where the keel grabs it. At the keel, a suction, or vacuum, effect is created, which ensures that the keel stays in the water at all times and that the hull does not get airborne and slam down again. A combination of almost planing and creating water resistance allows the ÖK Hull to reach high speeds, remaining steady in the water.”

Claimed advantages are: reduced slamming in waves; superior handling without sliding in turns; “no wake behind vessel,” thereby reducing drag; and excellent stability. Website videos tend to support the claims, showing the boat staying level in boisterous seas, plowing through waves rather than rising and falling. The University of Iceland conducted tests in which the ÖK Hull was compared to a deep-V hullform; the measurement employed was the number of hazardous conditions at the bow based on ISO 2631-1:1997 for Whole Body Vibrations (WBV). The measuring device was a Dyena Acceleration Recorder. The result: just six instances for the ÖK Hull compared to 112 for the deep-V craft, prompting Rafnar to claim “20x less slamming than competing hulls.” 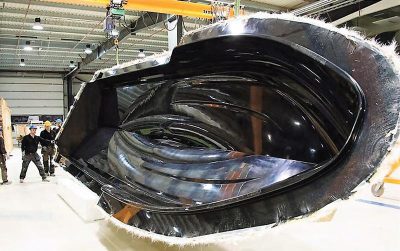 Rafnar is producing two recreational boats in its 60,256-sq-ft (5,600m2) facility: the 28‘ Flengur 850 Tender RIB with Hypalon tubes, and the Leiftur 1100 Tender, also a RIB. Both hulls are reconfigured as workboats for multiple services, such as search and rescue, coast guard, law enforcement, and patrol. Twin outboards with up to 800 hp (600 kW) for the larger vessel, and an inboard engine are offered. Concepts have been developed for superyachts and fer­ries as well. There have been some lively exchanges on boatdesign.net regarding the ÖK Hull—some writers are impressed by the studies, and others are skeptical of all claims, with a few saying it looks like a wet ride.