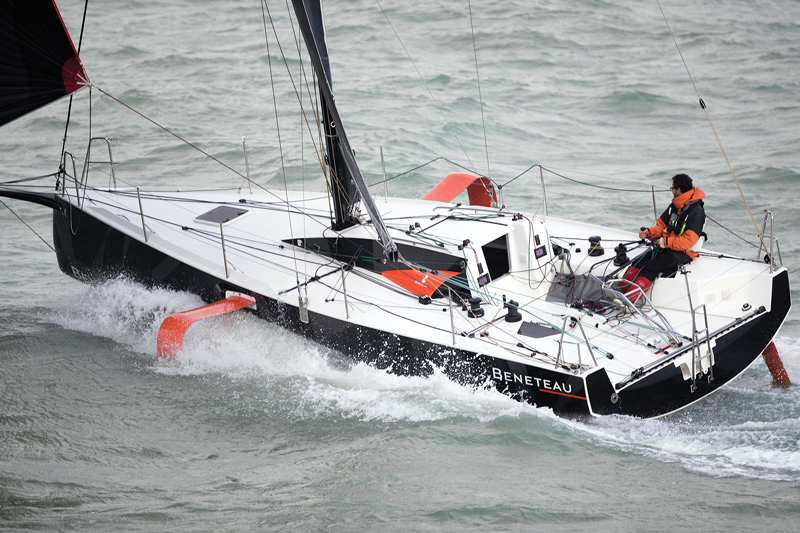 The newest iteration of the one-design composite Figaro Bénéteau 3 is a 32‘ (9.75m) high-performance sloop with port and starboard curved foils that improve lift and stability. The boat was designed by multihull specialists VPLP Design for La Solitaire URGO Le Figaro, a multi-port race along the French and Spanish coasts.

Followers of extreme sailing may know of Bénéteau’s several-year program to develop a production monohull with foils. Well, let’s qualify the term foils. The new 32‘  (9.75m) Figaro Bénéteau 3 does not rise out of the water like a Moth dinghy or multihulls on T-foil appendages installed on the centerline of the hull; instead, it has C-shaped port and starboard foils that increase lift and improve stability, while still retaining a deep, narrow-chord keel blade and ballast bulb. Bénéteau is jazzed, calling it “the world’s first production foiling monohull.” The concept resonated with members of the European yachting press, who chose the Figaro Bénéteau 3 as the European Yacht of the Year 2018 in the Special Yacht category.

The VPLP design was commissioned as a one-design for a specific event, the 2019 La Solitaire URGO Le Figaro. (For more on the French design firm VPLP, which specializes in long-distance monohull and multihull racing yachts, see Professional BoatBuilder No. 91.) This coastal multi-port event in France and Spain will mark the 50th anniversary of its running. The first, in 1970, was called the L’Aurore, after the sponsoring news­paper; in 1980, Le Figaro newspaper bought L’Aurore, and the name was changed. Later sponsors modified the name yet again; the word Solitaire refers to the singlehanded requirement of the event. The French love long-distance solo sailing in its many forms, including non­stop racing around the world. La Solitaire is regarded as a sort of train­ing ground for the longer and more dangerous races, affording amateurs the opportunity to test their skills and talent for fund-raising. Price for the first 50 Figaro Bénéteau 3s was recently announced at the relatively modest €155,000 ($191,925). After that, the price jumps to €175,000 ($216,690).

In 1991 race organizers selected Group Finot to design the one-design boats, and Bénéteau to build them. A new design was created in 2003, and now a third one. The course and the four ports change each year, usually covering 1,500–2,000 nm along the coast of France and usually one other country, such as England, Ireland, or Spain. Time at sea is about 10–13 days.

Bénéteau has established a racing team that among other duties will oversee construction of the latest design at the old Jeanneau plant in Nantes-Cheviré. Bénéteau’s Julien Ferre tells us that reinforcements are “multiaxial glass webs with polyester resin” and, “all the structural elements are made in DIAB PVC 80-kg foam in infusion.” Bénéteau partnered with several subcontractors, including Multiplast (see PBB No. 90), which made the retractable carbon fiber foils. Ferre says, “The port and starboard [foils] are independent. There is a position to sail upwind and a position to sail downwind. In the inside position, the foil stays inside the Bmax value. There is also a rake forward/backward to adjust the incidence of each foil.” Bénéteau’s general manager, Gianguido Girotti, elaborated: “The idea is to make sure that when in use, they exploit at maximum [beam] the righting moment effect, and once closed, they do not [exceed] the beam of the [hull].” That way, mooring and road transport are easier without having to remove the foils.

The deck, with hardware installed, is lowered onto the hull with bulkheads in place. Note the opening in the topsides for the port foil. 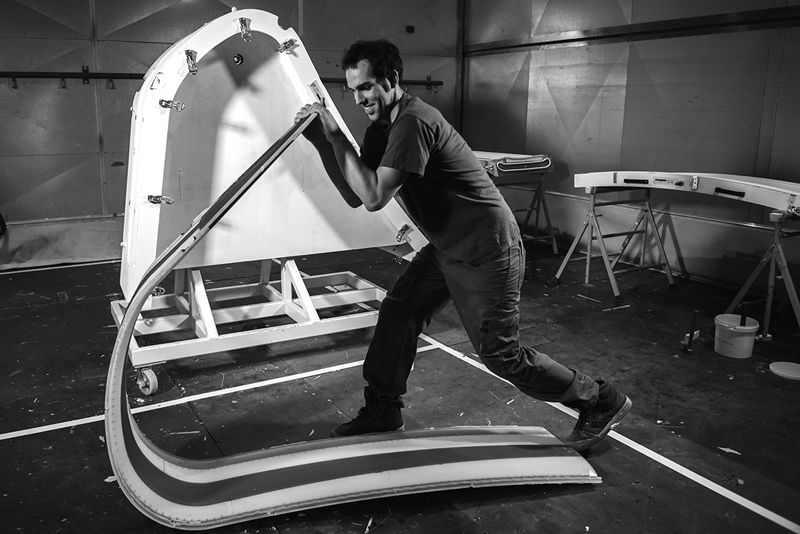