The British design studio Claydon Reeves (a partnership founded in 2010 by James Claydon and Mike Reeves) had a busy 2017, announcing the launching of several elite projects. Among them are the superyacht Delta One, built by the Mulder Shipyard in Scheveningen, The Netherlands, and Aeroboat, the studio’s own brand of what might be called sport or express yachts, not an altogether-new concept but certainly an ambitious undertaking with eye-catching “richness” and flair. Claydon Reeves modestly calls them “day boats.” Who said the Brits are dowdy?

The 36m (118‘) Delta One is the first of six on the order books for Mulder; the second design is under way. Working with the Vickers Studio, Claydon Reeves created an interior with amenities not often found in a yacht this size: an aft deck offering a “full-headroom beach club with bar and bathroom facilities.” Other notable features include a full-beam master suite with access to a private seating area at the bow, floor-to-ceiling windows for panoramic views, a folding side balcony, and a large cockpit with “al fresco seating and dining options.” 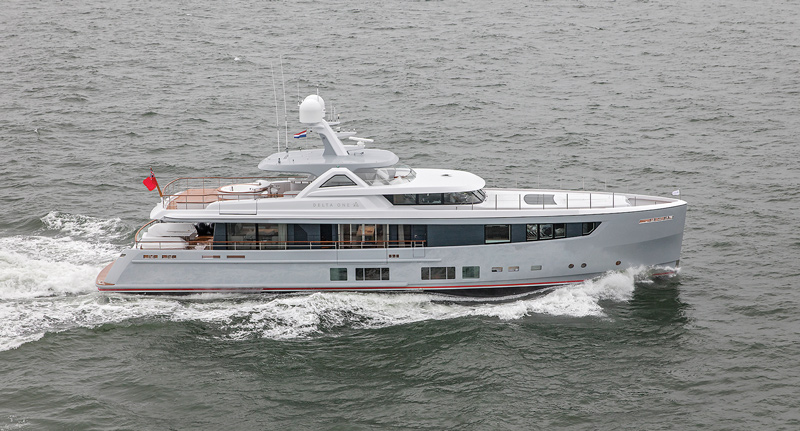 The British design firm Claydon Reeves created the interior of the 118′ (36m) Delta One using the owner’s automobile fleet for inspiration. A nondisclosure agreement prevents publication of interior images.

Claydon Reeves’s Andrew Johansson said he cannot share photos of the interior, per the client, but said all parties shared a passion for vintage sports cars, which informed the overall theme for the yacht’s interior—“a form of relaxed Art Deco with an automotive twist. The strong chevron of the floor planking that runs from the exterior into the interior is a play upon the Delta One logo that we also developed for the client. The width of the planking is 12.75cm [5“], the width of the rear wheels on a car special to the owner. Elsewhere, leather straps recall vintage luggage combined with nickel and chrome detailing. The bar stools have ‘tuck and roll’ leather stitching and ‘steering wheel’ footrests. The chevron pattern runs onto the tabletop in marble, while above, an abstract light sculpture recalls the dappled light seen through avenues of trees when driving a car. Playful details abound, such as flip-down side tables that hold a glass of water tightly while mimicking the dash and gauge layout from the owner’s favorite car.”

Naval architecture for the all-aluminum yacht was performed by Van Oossanen Naval Architects (PBB No. 121), incorporating its Fast Displacement Hull Form (FDHF). As described six years ago in this column (PBB No. 134, page 10), the FDHF “attempts to bridge the efficiency gap between fast and cruising speeds.” Perry van Oossanen, son of the firm’s founder, Peter van Oossanen, said, “A hull well designed for a speed of 20 knots is usually not very efficient running at 12 or 13 knots, and vice versa. The hullform is a hybrid round-bilge that incorporates a chine in the forward part, [and] a small, immersed transom. It has ‘smart’ running trim control by means of a combination of specially shaped propeller tunnels (fitted with trim wedges), and adjustable interceptors.” Also part of the package is a bulbous bow.

When asked if FDHF is evolving, Perry van Oossanen told us, “The FDHF is under continuous development in our office. We are also working on its successors. Other recent projects using the FDHF are: Galactica Super Nova [70m, Heesen], MY Home [50m, Heesen], MY Samurai [60m, Alia Yachts], the RPA-8, a 25m [82‘] Patrol Boat for the Rotterdam Harbour Company, and the Jetten Beach 45 [Jetten Shipyard]. We do not license the hullform to other NAs. The only way to use the FDHF is to order the naval architecture work from us.”

Origins of the Aeroboat line date to 2013, when Claydon Reeves introduced the Aeroboat 50 (15.2m). Naval architecture for that model was done by BMT Nigel Gee; however, a builder has yet to be determined. 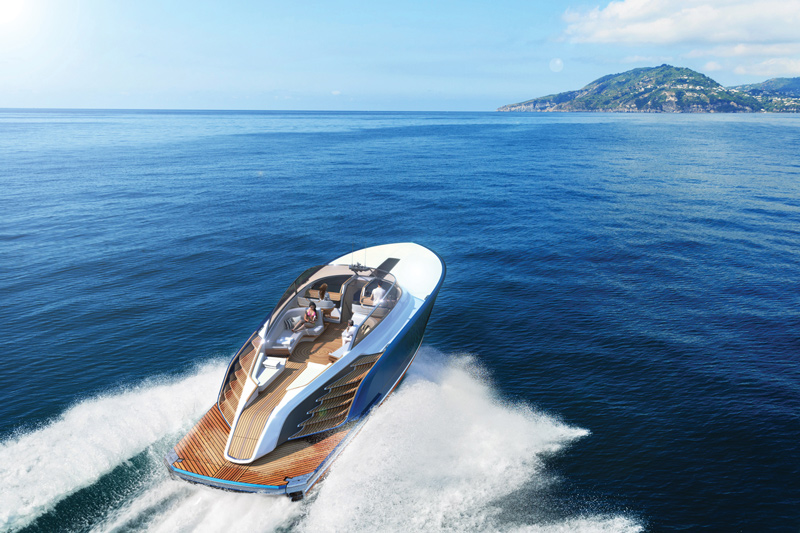 In an unusual move for a design firm, Claydon Reeves has developed its own brand, Aeroboat, calling it “the ultimate day boat for the 21st century.”

When asked why a design firm would want to build and market its own model line, Johansson said, “We saw a gap in the market for a really high-end day cruiser and wanted to do something that would set us apart from our peers. While we aren’t the only studio to have set up a new brand, we are the first to take a design beyond a drawing and produce it. So many great ideas never come to be, and we strongly felt that there was space in the market for a line of boats of this standard ranging between 55‘ and 100‘-plus [16.8m and 30.5m]. And so we took our original Aeroboat and spent considerable time refining it before arriving at the 65‘ [19.8m] Aeroboat S6. The goal with the Aeroboat S6 is to make the ultimate day boat for the 21st century.”