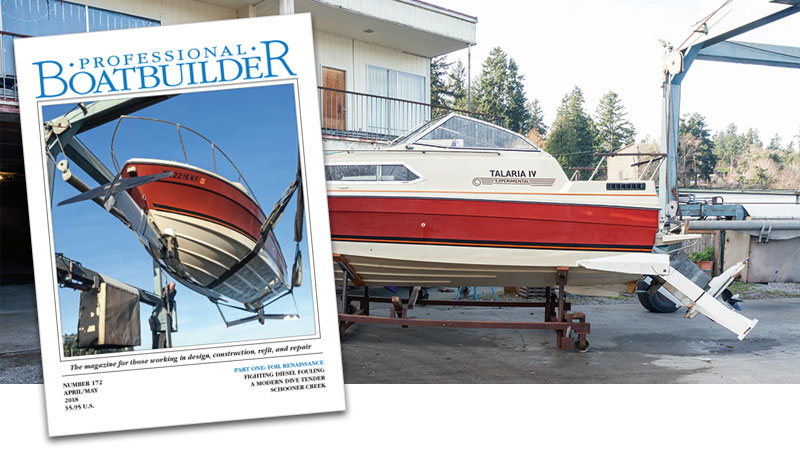 In Part 1 of our foiling story in Professional Boatbuilder No. 172 we take a look a the history of this technology, from the pioneers in the early days of the 20th century, to the US Navy, modern sailing foilers, and a dedicated hobbyist from the Seattle area, who converted a stock Bayliner

When talk turns to foiling, the first images that come to mind include America’s Cup catamarans (and similar craft) that are levitating above the water’s surface while zooming along at breakneck speeds exceeding 30 knots. Or those tiny, bad-ass Moth dinghies (and similar craft) that have perfected this low-drag and high-speed mode of transport for athletic daredevils. Heck, even keelboats like the IMOCA 60s, the Quant or the Figaro 3 by Beneteau are using foils to get airborne or at the very least for the purpose of reducing drag and increasing stability.

While all this is remarkable and perhaps an inevitable development, we need to remember that long before “flying sailboats” there were foiling powerboats. At first they were a byproduct of the early days of aviation research, because air and water are both fluids, albeit of different density, that can support foilborne vehicles. As far back as the turn of the 19th and 20th century experiments were undertaken on both sides of the Atlantic to lift hulls out of the water so they may go faster and farther while rising above choppy waters for a smoother ride. Italian Enrico Forlanini, the Meacham Brothers in the Midwest, or Warwick “Casey” Baldwin and the great Alexander Graham Bell were among the early pioneers. Bell and Baldwin even set a foiling speed record in 1919, hitting 61 knots with their aircraft-engine powered HD-4 on Bras d’Or Lakes in Nova Scotia.

The next impulses came from German Baron Hanns von Schertel who developed foiling passenger boats before World War II that he later marketed under the Supramar name. The first one, Freccia D’Or ran on Lago Maggiore in Italy, in 1953. Even Aristotle Onassis is said to have owned a foiling runabout of German design.

While the early generations of foiling powerboats relied on several variations of fixed surface-piercing foils that provided both lift and roll stability, the game began to change in the 1950s as the Cold War triggered an arms race between the US and the Soviet Union. In cooperation with Boeing, Grumman and Lockheed, the US Navy developed advanced foiling vessels that featured electronic controls, analog computers, fully submerged canard foil arrangements and water jet propulsion. Comparisons to airplanes were often used to describe the operation of these vessels, which weren’t just fast, but also had to sustain high operating speeds in high seas. Video footage demonstrates operation on open waters and the challenges that the designers faced.

In the 1970s, the Navy launched half a dozen foiling missile patrol boats that were built by Boeing, but never caught on in a big way. Instead the vessels were stationed in Key West to run drug interdiction operations in the Caribbean and western Atlantic for the US Coast Guard, before being scrapped in 1993 (one survives as a private museum exhibit).

Foiling then became a little bit of a side show, something spirited amateurs would pursue who obtain all kinds helpful information from Internet (i.e. from the International Hydrofoil Society) where they can find history, technical publications and a number of photographs. One of them, Harry Larsen, a retired mathematician who’d worked at Boeing for three decades turned his foiling habit into a remarkable project with his vessel Talaria IV, a Bayliner Monterey from the 1980s that he turned into a sophisticated foiling boat.

Talaria features an array of sensors that provide input to an industrial computer which fully manages the hydraulic controls of the foils. Mr. Larsen took us for a ride, opened the engine room and shared some technical insights that address height control and roll stability.

His work is getting quite a bit of attention these days, as numerous companies around the world are trying to leverage advanced composite technologies and ever faster and cheaper electronics to develop state-of-the-art foiling powerboats, which we will discuss in Part 2 of this story in PBB No. 173.